OPENING: The Ruffians BURNING BLUEBEARD Is Back For 6 Shows Only 12/27-31

Six Performances Only!
The Neo-Futurists and The Ruffians
Present the Return of the Holiday Hit
BURNING BLUEBEARD
By Jay Torrence
Directed by Halena Kays
December 27 – 31, 2017 at The Neo-Futurarium 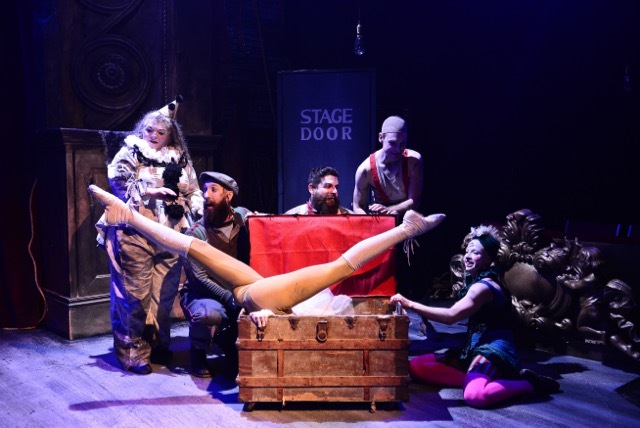 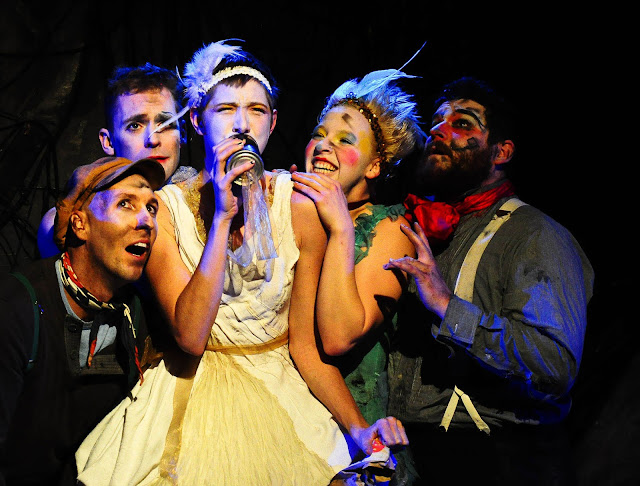 Here at ChiIL Mama and ChiIL Live Shows we've been fans of Burning Bluebeard from the start. We caught the inaugural year at the Neo-Futurarium, several seasons at Theater Wit, and are excited to see them return to their roots, back where it all began for 2017.

Ruffians, PLEASE tell me you're adding back in the hilarious, site specific "rap" about how to escape the building, and would you film it and put it on YouTube already? It was a favorite of ours that got cut when the production moved to larger digs.

The show is family friendly for the most part for tweens and older kids, though it does deal with intense subject matter if your youngsters are sensitive. Check out some of our past reviews here. Highly recommended. 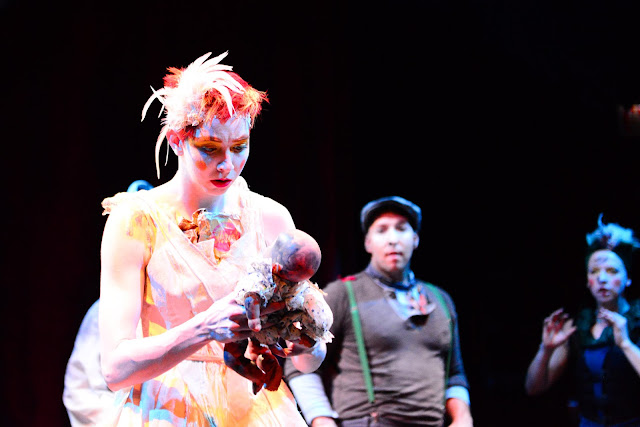 The Neo-Futurists and The Ruffians are thrilled to announce the return of the holiday hit BURNING BLUEBEARD for six performances only, December 27 – 31, 2017 at The Neo-Futurarium, 5153 N. Ashland Ave. in Chicago. The fantastical tale inspired by Chicago’s 1903 Iroquois Theatre fire has been an annual Chicago holiday favorite for six years running. Tickets are currently available at neofuturists.org. 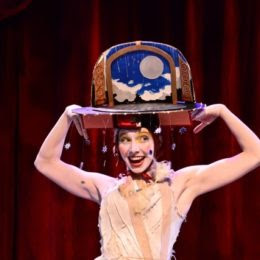 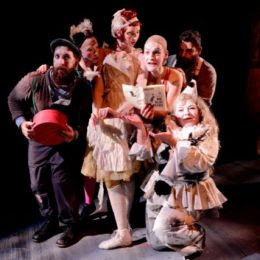 Inspired by the true story of Chicago’s 1903 Iroquois Theatre Fire, BURNING BLUEBEARD is the story of six singed clown performers who emerge from the burnt remains of history attempting to perform their spectacular Christmas Pantomime once and for all. But this time, they hope to finally reach the true happy ending of their second act and avoid the fateful fire that killed 600 of its audience members. BURNING BLUEBEARD is a whimsical romp with a sensitive heart, a joyful eulogy with a sharp irreverent wit including music, clowning, tumbling, acrobatics and dance. Each performance is a vaudevillian delight with a story that excavates the poetic and poignant remains of a piece of Chicago’s rich history. 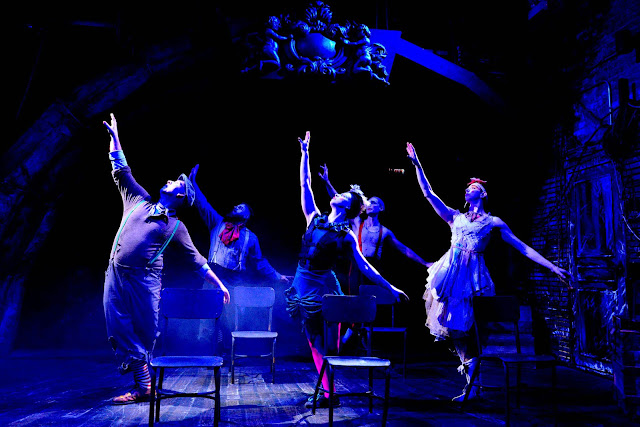 The run of BURNING BLUEBEARD will include two performances on the 114th anniversary of the actual Iroquois Theatre fire, Saturday, December 30. An optional New Year’s Eve VIP Package is available which includes performances of BURNING BLUEBEARD (7:30 pm) and THE INFINITE WRENCH, The Neo-Futurists’ popular barrage of two minute plays (11 pm), along with food, drinks and a midnight toast. 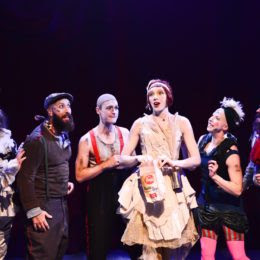 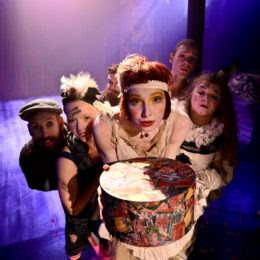 New Year’s Eve VIP Package: $75 – In addition to regularly priced tickets to BURNING BLUEBEARD, a limited number of special VIP New Year’s Eve packages will be available, which include tickets to both BURNING BLUEBEARD at 7:30 pm and The Neo-Futurists’ THE INFINITE WRENCH New Year’s Eve performance at 11:00 pm. In between shows, VIP ticket holders will be treated to dinner, live performance and music, brews from Metropolitan Brewery and type-written poetry on demand from Poems While You Wait. The Neo-Futurists' THE INFINITE WRENCH performance will finish just in time for an audience champagne/sparkling apple juice toast at midnight. Tickets are currently available at neofuturists.org. 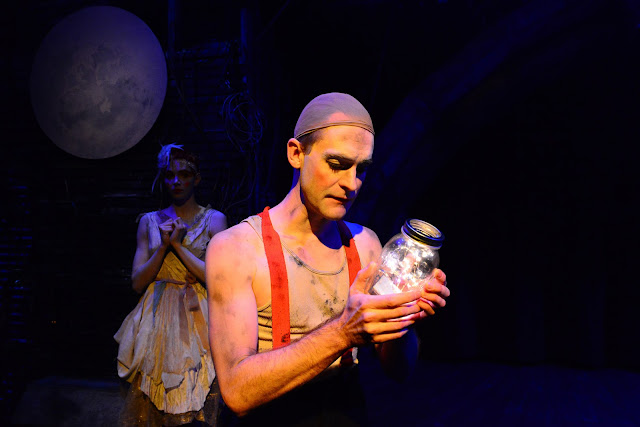 About the Creative Team
Jay Torrence (Playwright) is a founding member of the artistic collective The Ruffians. Playwriting credits include: Burning Bluebeard, Ivywild and Roustabout: The Great Circus Train Wreck. Performance credits: 500 Clown (Frankenstein), The Hypocrites (Ivywild), Redmoon Theater (Hunchback), Akvavit Theatre (Hitler on the Roof), Theater Oobleck (SOS: Summer Clown Cruise) and The Neo-Futurists (Too Much Light Makes the Baby Go Blind) where he was a proud ensemble member for twelve years and the former Artistic Director. Jay was named one of the “Top 50 Players in Chicago Theater” by Newcity and was also named Best Dark Clown in the Age of Trump in Newcity’s “Best of Chicago 2017.” He earned his MFA degree in playwriting and creative non-fiction from The University of British Columbia. He currently teaches clown, playwriting and performance studies in Chicago and is a Resident Playwright at Chicago Dramatists.

Halena Kays (Director) is a Chicago and Nashville based theater director and performer. Most recently, she was the artistic director of The Hypocrites where she both performed and directed. She is the co-founder and former artistic director of Barrel of Monkeys, where she created and directed the majority of their public performances. She is a UT-Austin and Northwestern grad, former member of the Big Apple Circus Clown Care unit, past co-artistic curator for Theater on the Lake and professor of directing at MTSU. Halena is a proud founding member of The Ruffians and an Artistic Associate with The Neo-Futurists where she directed Pop/Waits, 44 Plays for 44 Presidents, Burning Bluebeard, co-created and directed Daredevils and Daredevils Hamlet and the sight specific extravaganza, Fake Lake. Other interesting Chicago directing credits include: Endgame, Ivywild, Six Characters in Search of an Author at The Hypocrites; The Magic Play at The Goodman, Lord of the Flies at Steppenwolf TYA; Feast (part of a collaborative directing effort) with The Albany Park Theatre Project at The Goodman. Halena has been nominated for a Jefferson Citation for Best Supporting Actress and Best Direction, named one of the “Top 50 Players in Chicago Theater” by Newcity and is a recipient of the prestigious 3Arts. Proud member, SDC.

About The Neo-Futurists
The Neo-Futurists are a collective of writer-director-performers creating theater that is fusion of sport, poetry and living-newspaper. Originating over 10,071 plays within the newly launched The Infinite Wrench, 28 years of Too Much Light Makes the Baby Go Blind, and over 65 full-length productions within their immediate, non-illusory aesthetic, The Neo-Futurists have grown to become one of the most highly regarded experimental theater companies in the United States. From humble beginnings as the first late-night theater production in Chicago, they launched what became Chicago’s longest running show and today sustain multifaceted programs such as Neo-Access, The Kitchen (a micro-festival on art and performance), Prime Time, exchanges with branches in New York and San Francisco, Neo-Lab, and The Infinite Wrench, their flagship ongoing late-night show running 50 weekends every year. For more information visit www.neofuturists.org

About The Ruffians
The Ruffians are an artistic collective of theater makers (clowns, daredevils, acrobats, dancers, writers, performers, designers, directors). The Ruffians have all honed their craft working over a decade in Chicago’s various and thriving experimental, clown and storefront theater communities. A Ruffians objective is to make beautiful things with rough edges. A Ruffians motto: Breathe. Dare. Live. 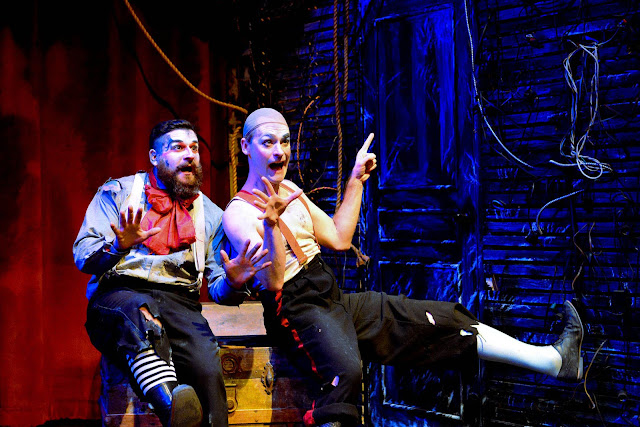 Posted by Bonnie Kenaz-Mara at 6:33 PM