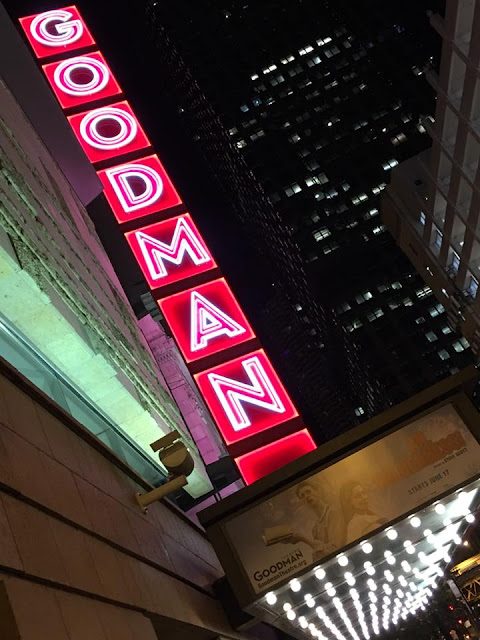 
Goodman Theatre is proud to support Chicago’s off-Loop theater companies Teatro Vista, Definition Theatre Company and Collaboraction as a producing partner on several high-profile productions this summer—two of which open this week. The Chicago premiere of Branden Jacobs-Jenkins’ An Octoroon, which recently opened at Victory Gardens, is directed by Goodman Resident Director Chuck Smith.

Teatro Vista’s La Havana Madrid by Sandra Delgado opened at the Goodman in the Owen Theatre, following two sold-out previous engagements (at Steppenwolf Theatre Company and The Miracle Center in Logan Square). Directed by Cheryl Lynn Bruce, La Havana Madrid was developed in 2015 during Delgado’s time as a member of the Goodman’s Playwrights Unit—a year-long program for Chicago-based writers, and a significant component of the Goodman’s new play development efforts.

Collaboraction’s PEACEBOOK —24 social-issue driven short performance pieces rendered by more than 200 artists in a city-wide festival of theater, dance, music, visual art and spoken word—launches at the Goodman on August 26 in the Owen Theatre, followed by tours to south, west and north side neighborhoods in Chicago Park District’s Nights Out in the Parks program.

“Among the many ways that theater in Chicago is unique, one of the best is the collaboration among its companies— each of which contributes to our nationally-recognized cultural landscape,” said Executive Director Roche Schulfer, who is also a founding member of the League of Chicago Theaters. “As an artistic and community organization equally dedicated to furthering the art on stage and providing service to Chicago, the Goodman is proud to contribute to this excellence with resources to help these projects flourish.”

About the Plays
In La Havana Madrid, Chicago’s eponymous 1960s nightclub comes bursting back to life in “an immersive, wholly enjoyable experience” (Chicago Reader) complete with live music and “enough dancing and bonhomie to tempt you away from your little table down front” (Chicago Tribune). Inspired by true stories of Cuban, Puerto Rican and Colombian immigrants who found refuge in the nightclub, Delgado leads the eight-member cast as a mystical woman who conjures stories and vibrant songs performed live onstage each night by Colombian-American musician Roberto "Carpacho" Marin and his band of 30 years, Carpacho y Su Super Combo. La Havana Madrid appears through August 20 in the Owen Theatre (Opening Night is Wednesday, July 26 at 7pm). Tickets ($30-$50; subject to change) are available at GoodmanTheatre.org/LaHavanaMadrid or (312) 443-3800. La Havana Madrid is recommended for ages 12 and up.

A modern riff on Dion Boucicault’s 1859 classic melodrama, The Octoroon,  Branden Jacobs-Jenkins’ Obie Award-winning historical satire An Octoroon directed by Chuck Smith follows a plantation in financial ruin, the tumultuous love story of its heir apparent, the evil overseer plotting to take it all for himself and the slaves trying to keep it all together. Hilarious, pointed and provocative, An Octoroon offers up a subversive take on race in America–both then and now. An Octoroon appears through August 20 in the Richard Christiansen Theater at Victory Gardens Theater (2433 N. Lincoln) as part of Definition’s tenure in the Victory Gardens Resident Theater Program. For tickets, call 773.328.2136 or visit VictoryGardens.org/AnOctoroon.

Following its launch at the Goodman, PEACEBOOK tours to the following Chicago neighborhoods:

Teatro Vista’s 2017/2018 season opens with La Havana Madrid at Goodman Theatre. Teatro Vista produces, develops and commissions plays that explore the wealth and variety of the human experience from a Latinx perspective. The company provides work and professional advancement opportunities for Latinx theater artists, with special emphasis on the company’s ensemble members, and seeks to enhance the curricular goals of Chicago students through theatre. Teatro Vista was recently celebrated as one of “Chicago’s Cultural Leaders” by the Arts & Business Council of Chicago and received the League of Chicago Theatre’s Artistic Leadership Award. For the development of La Havana Madrid, Teatro Vista and Delgado received from The Chicago Community Trust, and the 2015 Joyce Award. Delgado also received a 3Arts 3AP Project Grant and developed the script as a member of the 2015/2016 Playwright’s Unit at Goodman Theatre. Teatro Vista is supported by The Joyce Foundation, the Chicago Community Trust, Alphawood Foundation, Paul M. Angell Family Foundation, The MacArthur Fund for Arts & Culture at the Richard H. Driehaus Foundation, Bloomberg Philanthropies, the Department of Cultural Affairs and Special Events of the City of Chicago, The Shubert Foundation, The Gaylord and Dorothy Donnelly Foundation, the Chicago Latino Theater Alliance, Purple Group, Cumberland Irving and Vidal & Associates, Inc. and The Saints. For more information, visit TeatroVista.org, on Twitter (@TeatroVista), Facebook and Instagram.

Collaboraction (collaboraction.org ) collaborates with artists, community activists, and citizens from throughout the city to create original theatrical experiences that push artistic boundaries and explore critical social issues with a diverse community of Chicagoans. Collaboraction has worked with over 3,000 artists to bring more than 60 productions and events to upwards of 250,000 audience members. Production highlights include Collaboraction’s acclaimed series of Crime Scene productions responding to Chicago’s current crime epidemic, 15 years of the SKETCHBOOK Festival, Sarah Moeller’s Forgotten Future: The Education Project in 2014, 2010’s Chicago premiere of 1001 by Jason Grote, 2008’s world premiere of Jon by George Saunders and directed by Seth Bockley, and 2007’s The Intelligent Design of Jenny Chow: an instant message with excitable music by Rolin Jones. Collaboraction, based on the third floor of Wicker Park’s historic Flat Iron Arts Building with three theatre spaces, is led by Artistic Director Anthony Moseley and a dedicated staff and board of directors. Collaboraction is supported by Bloomberg Philanthropies, The Gaylord and Dorothy Donnelley Foundation, Richard H. Driehaus Foundation via the MacArthur Foundation, and the Wicker Park & Bucktown SSA #33 Chamber of Commerce. This program is partially supported by a grant from the Illinois Arts Council Agency. For tickets and information, visit collaboraction.org or call 312.226.9633.

America’s “Best Regional Theatre” (Time magazine) and “Chicago’s flagship resident stage” (Chicago Tribune), Goodman Theatre is a not-for-profit organization distinguished by the quality and scope of its artistic programming and civic engagement. Founded in 1925, the Goodman is led by Robert Falls—“Chicago’s most essential director” (Chicago Tribune ), who marks 30 years as Artistic Director this season—and Executive Director Roche Schulfer, who is celebrated for his vision and leadership over nearly four decades. Dedicated to new plays, reimagined classics and large-scale musical theater works, Goodman Theatre artists and productions have earned hundreds of awards for artistic excellence, including: two Pulitzer Prizes, 22 Tony Awards, nearly 160 Jeff Awards and more. Over the past three decades, audiences have experienced more than 150 world or American premieres, 30 major musical productions, as well as nationally and internationally celebrated productions of classic works (including Falls’ productions of Death of a Salesman, Long Day’s Journey into Night, King Lear and The Iceman Cometh, many in collaboration with actor Brian Dennehy). In addition, the Goodman is the first theater in the world to produce all 10 plays in August Wilson’s “American Century Cycle.” For nearly four decades, the annual holiday tradition of A Christmas Carol has created a new generation of theatergoers.

The 2016 opening of the Alice Rapoport Center for Education and Engagement (“the Alice”) launched the next phase in the Goodman’s decades-long commitment as an arts and community organization dedicated to educating Chicago youth and promoting lifelong learning. Programs are offered year-round and free of charge. Eighty-five percent of the Goodman’s youth program participants come from underserved communities.