REVIEW: The Illusionists Shock and Awe This Week at Oriental Theatre

THE ILLUSIONISTS – LIVE FROM BROADWAY 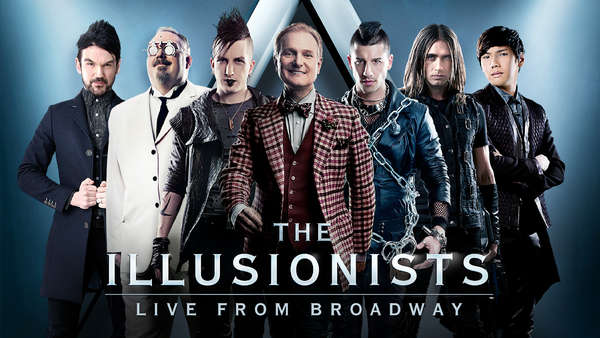 As you can tell from the photo, this motley crew tricksters are not your parents' magicians. They're not your typical tux wearing, top hat toting prestidigitators, working the kiddy party scene. These world class illusionists are edgy, astounding, and do magic on such a large scale they can fill a venue like The Oriental theatre with a seating capacity of 2,253. I took my husband and 15 year old son this year and we unanimously agreed that The Manipulator, An Ha Lim, was our favorite. His card act is as gorgeous as it is baffling. All 7 Illusionists have made skills, but we particularly enjoyed The Daredevil, Jonathan Goodwin's antics with a crossbow and metal blindfold and The Anti-Conjuror, Dan Sperry's avian artistry.

Here at ChiIL Mama & ChiIL Live Shows, we caught The Illusionists on Wednesday and we were amazed and well entertained. The only minor let down is the show hasn't changed much since we saw them come through Chicago in 2015 with THE ILLUSIONISTS - WITNESS THE IMPOSSIBLE™. The acts in THE ILLUSIONISTS - LIVE FROM BROADWAY™ are almost identical. That said, the acts are cool enough it's well worth redux and we were more than happy to see the same material again. This is a great all ages show, and even mystifying and fun for the tough to please teen and tween demographic. Highly recommended!

Don't miss this. The world’s best-selling touring magic show, THE ILLUSIONISTS - LIVE FROM BROADWAY™ will disappear before you know it. On the heels of a highly successful multi-city tour and run on Broadway, THE ILLUSIONISTS will play Chicago’s Oriental Theatre (24 W. Randolph) from Feb. 21 to Feb. 26 for a limited one-week engagement.

·The Anti-Conjuror, Dan Sperry. Described as Marilyn Manson meets David Copperfield, Dan combines the art of magic with the macabre and is one of the top-10 most Googled people, thanks to a legendary “America’s Got Talent” appearance.

· The Trickster, Jeff Hobson is the epitome of glamour and showmanship. Don’t be fooled by his innocent appearance; Jeff has audiences laughing long after the curtain goes down.

· The Inventor, Kevin James, known for innovative illusions, is an inventor, comedian and collector of the strange and unusual. Kevin is one of the most prolific inventors of magic in the world and has created some of the most celebrated illusions of the last century.

· The Escapologist, Andrew Basso. Italy’s star escape artist, Andrew considers Houdini his hero and is fast becoming one of the world’s most popular illusionists. He is the only person in the world to perform Houdini’s famous Water Torture Cell with absolutely no covers.

·The Deductionist, Colin Cloud, one of the greatest thought readers of all time is a psychic savant known as a real-life Sherlock Holmes. Don’t play against him in a game of poker – he’s never lost.

·The Daredevil, Jonathan Goodwin is widely considered one of the most creative, skilled, and frankly crazy stunt performers in the world. He is an accomplished knife thrower, archer, escape artist, fakir, martial artist, free diver, and free climber. Unlike the other performers in the show, Jonathan is not a magician or illusionist but he will leave any audience breathless with his death-defying stunts.

Posted by Bonnie Kenaz-Mara at 2:55 PM