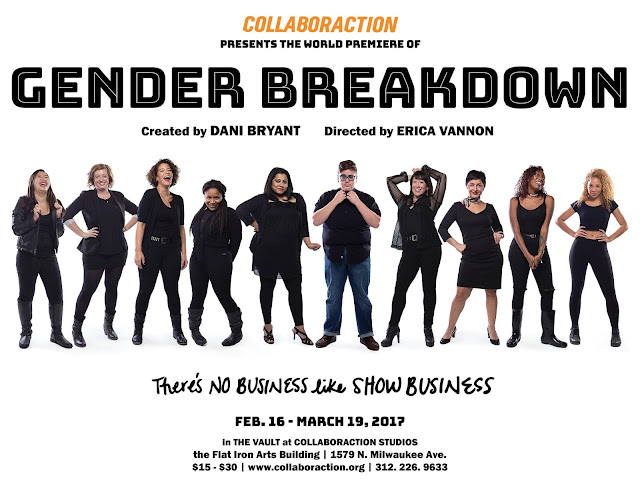 We're so excited to see this timely topic tackled by a female playwright and brought to fruition by an all female identified cast, directed by a woman. I'll be out to review March 3rd, but in the meantime get your tickets and check it out. Collaboraction has been a boon to Chicago for years, tackling the tough issues of violence in Chicago and more, giving voice to new plays, and fostering a strong community. We can't wait to catch this world premiere.

According to a recent study, only 25% of the plays produced in Chicago's 2015-16 theater season had female authors. Only 36% were directed by women. A deeper dive into the numbers suggests larger theaters cast fewer ratios of women than smaller non-equity companies, a sobering reality for female actors thinking about job advancement.

Disappointing stats like these and how the recent presidential election put misogyny and gender equity squarely in the media spotlight spurred 10 female identified performers and an all-female identified production and design team to devise Gender Breakdown.

A compilation of true, absurd, uncomfortable and gut-punching stories culled from more than 200 Chicago theater artists, Collaboraction Theatre Company's first world premiere of 2017 is a response to the lack of gender equity on and offstage.

Vivid tales of violence, miseducation, segregation, and the ongoing disrespect and marginalization of women - even in Chicago's acclaimed theater industry - pull back the curtain on real issues of misogyny, gender politics and racism within the theater industry and beyond.

Ultimately, via deeply personal stories from training, auditions, and the rehearsal room, Gender Breakdown theatricalizes the question "How is this possible, that in 2017, females are still marginalized in our community?"

Gender Breakdown is created by Dani Bryant and directed by Erica Vannon - the lead artists behind Spanx You Very Much, an exploration of female body empowerment through a 45-woman dance explosion, and the break-out hit from Collaboraction's 15th and Final SKETCHBOOK Festival in 2016.

Performances run through March 19: Thursday through Saturday at 7:30 p.m., and Sunday at 3 p.m. No show Thursday, February 23.

Gender Breakdown is presented in The Vault at Collaboraction Studios in the Flat Iron Arts Building, 1579 N. Milwaukee Ave., in Chicago's Wicker Park neighborhood. Single tickets to performances are $20-30; $10-$15 for students, educators and industry.