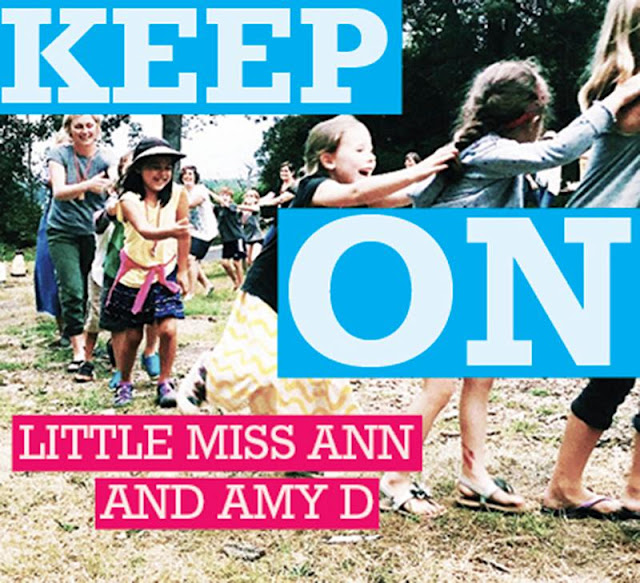 Cultures, kids and music collide for a joyful explosion of original songs, available on February 17, 2017

With the draining political climate and the general exhaustion that comes from raising young children, even on the best of days, Keep On is an uplifting album whose time has come. Little Miss Ann has been the undisputed queen of Chicago's Kindie Scene for years and she's long been a favorite of ours here at ChiIL Mama.

Little Miss Ann has enjoyed national acclaim and a fervent following for her upbeat, down-to-earth and interactive folksy music. Her fifth album of hopeful and happy songs, Keep On, is the result of a collaboration with children’s music newcomer Amy D. Keep On will be available from various music retailers and from littlemissann.com on February 17.


More about Keep On:
Recorded in the Hudson Valley of New York with Grammy-winning producer Dean Jones, Keep On ranges in musical styles. Grownups will appreciate the 50’s doo-wop sounding song, “L.O.V.E.,” the Andrew Bird-meets-Liz Phair ode to Chicago “The 606,” as well as re-imagined traditional favorites like the Johnny Cash-esque “Where Is Thumbkin?” and a spirited Calypso song that originated in Jamaica called “Hill and Gully Rider.” There’s even a springy-swingy rendition of “Tiptoe Through the Tulips,” blending sweet harmonies, mandolin, and a toy piano. As Jones says, “These two complement each other perfectly. If it sounds like we were having fun it's because we were. These songs come straight from the heart!” Guest artists include 2016 Latin Grammy winner 123 Andrés and Tim Sutton from Ratboy Jr.

New to the independent family music scene and originally hailing from Nashville, Amy D sings and plays violin, mandolin, melodica, and piano. After meeting at a kids’ music class in Chicago, Ann and Amy discovered that they had many things in common, musically and culturally.  Amy D joined Little Miss Ann’s band in 2015, and the musical connection led to the process of writing and recording the songs of Keep On. Ann and Amy provide a fresh take on the tradition of sing-along, call-and-response style songwriting of trailblazers like Chicago-based Ella Jenkins, Raffi, Elizabeth Mitchell, and other enduring artists of the genre. Many songs on the album are also firmly rooted in Chicago.
Indeed, the songs grew out of both artists’ experiences in working with families: Ann in education (including Chicago’s historic Old Town School of Folk Music) and Amy in social work. Their common Filipino backgrounds inspired two of their original songs: “Ube,” about a cherished Filipino staple, the purple yam, and “The Senses Song,” which mentions halo-halo and lychee, sweet treats from Filipino cuisine.

Produced with the help of a successful Kickstarter campaign, the digital edition of Keep On is available in January via Bandcamp. It will also be available on physical CDs and for downloading from cdbaby.com, amazon.com, and iTunes on February 17. A CD release party will be held at Chicago’s Beat Kitchen on February 26,  and on March 26, Ann will perform at Jalopy in Brooklyn, NY,  with award-winning artist Suzi Shelton.  The duo is also busy planning music videos to reflect this shared musical and cultural heritage.

About the Artists:
Little Miss Ann (a.k.a. Ann Torralba) is a first-generation Filipina-American. She is a former Chicago Public School teacher and a veteran instructor at the esteemed Old Town School of Folk Music. Ann is a founder of the Windy Kindie Chicago Cooperative and has written about all things Kindie for various websites. Little Miss Ann has made four other children’s music albums and has produced several concerts. She produced a popular Nodcast Podcast for the Land of Nod and contributed a song to Keep Hoping Machine Running – Songs of Woody Guthrie (benefiting the Woody Guthrie Archives). Ann lives in Chicago with her husband and daughter.

Amy D (a.k.a. Amyliza de Jesus) is also a first-generation Filipina-American, and currently a licensed clinical social worker specializing in music therapy She has worked with children and families in a variety of settings for the past 13 years.  Her intention is always to incorporate music, whether she is working in school and family counseling, case management, therapy, or preschool literacy outreach.  Originally from Nashville, Amy began playing piano and violin as a pre-college student at Vanderbilt University's Blair School of Music. She went on to major in piano performance, and began songwriting in college. She is currently collaborating with other artists to create therapeutic songs for children, and is a substitute teacher in the Wiggleworms programs at Old Town School of Folk Music.

Upcoming Shows Chicago & NYC:
Little Miss Ann & Amy D Keep On Track List
Together, these two artists represent what’s great in music for children today, as they build on the traditions of children's music legends like Ella Jenkins, Pete Seeger and Raffi, with sounds firmly rooted in folk music. The instrumentation and lyrics appeal to families today. There are far too few minority women working in the genre, and they are among the most exciting voices, creating songs about an unusual array of topics.

Ann Torralba is a former Chicago Public School teacher, mom and touring musician, a fixture of the national “kindie” music scene. In her work at the Old Town School’s Wiggle Worms programs, she met and collaborated with Amy de Jesus, another educator and social worker who originally hails from Nashville.
The two of them grew up in Filipino immigrant households, where karaoke-style singing and musical “masses” were part of the daily scene. Ann remembers “a Filipino priest singing into the karaoke machine "My Way" between the mass and the huge Filipino feast!” They each fell into folk music in their own ways. Amy says, “It's funny, because even though I'm a Nashville native, I grew up really disliking country music and bluegrass.  But when I moved away from the South and started to explore what my authentic voice was - it really lent itself to that type of acoustic music.  It struck me, because even though I had kept that genre of music at arm's length my entire life, it somehow got in me... and I began to embrace it.”

The new album Keep On was produced last summer with Grammy winner Dean Jones in his funky Hudson Valley studio. Dean worked to spotlight the harmonies and added delightful little background sounds to the tracks. Ann and Amy’s cultural heritage is evident in first track, “Ube.” The pure delight of their harmonies and unique take on traditional folk is evident in “The Senses Song” and “L.O.V.E.”  There's such a positive vibe in every song, including the final track, “Keep On Keepin’ On.” Listen for strains of their cultural background in these songs, even in their rendition of “Tiptoe through the Tulips.”
Posted by Bonnie Kenaz-Mara at 6:22 PM