YOUNG ASPIRING COMICS ARE INVITED TO LAUGH, LEARN, AND PLAY ALL DAY AT THE CHICAGO YOUTH COMEDY FESTIVAL

Registration is now open for students ages 12-17 to participate in the first-ever festival uniting young, up-and-coming comedians May 7 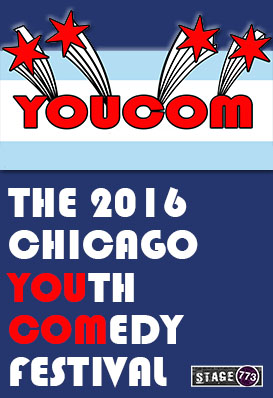 Here at ChiIL Mama we love to see new opportunities for kids to try their hand at improv, sketch comedy and more. We're happy to spread the word about YouCom, and hope it becomes and annual workshop series for Chicago's kids.

Stage 773 producers of The Chicago Sketch Comedy Festival and Chicago Women’s Funny Festival are thrilled to introduce The Chicago Youth Comedy Festival (YouCom), a brand new, one-day extravaganza for young comedians on May 7 from 9:00 AM to 6:00 PM. YouCom features top-notch workshops led by professionals from Chicago’s notable comedy institutions as well as engaging experiences for over 100 young comic hopefuls to learn, play, and perform together. YouCom 2016 focuses on physical improv and sketch comedy with standout performances by the all-silent, all-funny trio Bri-Ko and the hip and humorous Comedy Dance Collective. Individual students and groups ages 12-17 are invited to register by visiting http://stage773.com/ChicagoYouthComedyFestival.

“There’s nothing – at all – like this offered in the city, especially for young performers! Training in physical comedy is incredibly exciting and we are thrilled to bring professional education and performances to students. They’ll walk out with a solid skill set and a new way of thinking about performance.”
-- Brian Posen, Creative Director at Stage 773

YouCom presents the opportunity to learn physical comedy from highly skilled professionals in age-appropriate workshops as well see exclusive performances by two of the amusing, laughter-loaded shows highlighted in Stage 773’s The Inoffensive Theatre Series. As Chicago’s go-to for weekend family fun, The Inoffensive Theatre Series delivers comedy-crammed entertainment at popular prices and a dynamic line-up showcasing spectacles such as Bri-Ko and the Comedy Dance Collective.

Delight in a visually hilarious celebration of movement-based comedy as the current, former, and almost dancers of the Comedy Dance Collective take the stage at YouCom. With creativity and wit, this clever crew successfully discovered an unconventional, offbeat approach to sketch comedy that includes and illuminates physical elements. The exhilarating assortment of comedic art forms extends from group dances to monologues with flashes of puppets, props, and technology flaunted throughout. This flawless fusion of motion and humor promotes originality while declaring the Comedy Dance Collective an instant sensation.

Registration for The Chicago Youth Comedy Festival is $125 for students ages 12-17 and $65 for chaperones. The cost includes all workshops and performances, lunch, snacks, a YouCom t-shirt, as well as two tickets for a complimentary return visit to The Inoffensive Theatre Series at Stage 773. Additional information is available online at www.Stage773.com, by phone 773.327.5252, and in person at the Stage 773 box office, located at 1225 W. Belmont.

Teachers:
Ron Scot Fry is writer, performer, director, artist, and teacher of Commedia dell’arte. Ron has written over fifty scripts for theatres, festivals, and schools as well as directed over seventy-five productions for the Optimist Theatre and Renaissance Entertainment Productions (also known as the Ren Faire in Bristol, WI). His teaching background includes Carthage College in Kenosha, Wisconsin, Bristol Academy of Performing Arts, Columbia College Chicago, and Milwaukee Public Theatre. Ron uses his fine art painting and sculpting skills to create larger-than-life parade puppets and stilt characters, bringing over fifty characters to life for audiences of all ages and size.

Precious Jennings is a performer and teacher of Physical Theater in Chicago. She has performed with companies such as The Humans and Chicago Moving Company and has created in collaboration with Ayako Kato, K.J. Holmes, Amelia Charter and Julia Antonik. As a teacher, in the Theater Department at Columbia College Chicago Precious utilizies vocal and physical directives in developing her practice which assists artists work and create. Her practice and research includes Body-Mind Centering® , Lucid Body technique and Grotowski-based practices. Zrecious’s work is driven by the development in clarity of relationship and collaboration with those she works with as mirrored by the physical, energetic and vocal body. She is a certified Massage and Thai-bodywork practitioner as well as a Certified yoga teacher.

Tim Soszko is a writer, performer, and teacher of Comedy Writing who creates scenes using the tools of improvisation and sketch. He teaches with Second City, Barrel Of Monkeys, IO Chicago, Emerald City Theatre Co., Elmhurst Children’s Theater, After School Matters, and Columbia College just to name a few. Tim is an alumnus of The Cupid Players and now writes and performs with Bri-Ko as well as The Tim and Micah Project. Additionally, he is attempting to make millions as a voiceover artist.


Stage 773 is a vibrant anchor of the Belmont Theatre District and home to Chicago’s finest off-Loop talent. As a performance and tenant venue, our four stages provide entertainment for everyone: comedy, theatre, dance, musicals and more. We are a not-for-profit, connecting and catalyzing the theater community, while showcasing established artists and incubating up-and-coming talent.
Posted by Bonnie Kenaz-Mara at 10:05 PM