**Do note, there is violence & violence of a sexual nature**

Post-show discussion, pay-what-you-can dates, and lots of desserts are in store for audiences during the run of the show

Events and deals have been announced for Babes With Blades Theatre Company’s 180 Degree Rule, written by Chicago playwrights Barbara Lhota (playwright, The Double and BWBTC ensemble member) and the late M.E.H. Lewis, to be performed at City Lit Theatre, 1020 W. Bryn Mawr Ave., in Chicago. The show will run Thursdays-Saturdays at 8PM and Sundays at 3 from April 28 - May 21, plus Wednesdays May 11 and May 18 8pm.
180 Degree Rule is directed by Rachel Edwards Harvith (Associate Artistic Director, Chicago Dramatists) and the cast features Kate Black-Spence, Tommy Bullington, Chris Cinereski, Amy E. Harmon*, Lisa Herceg*, Kimberly Logan*, Jason Narvy, and Kelly Yacono.* 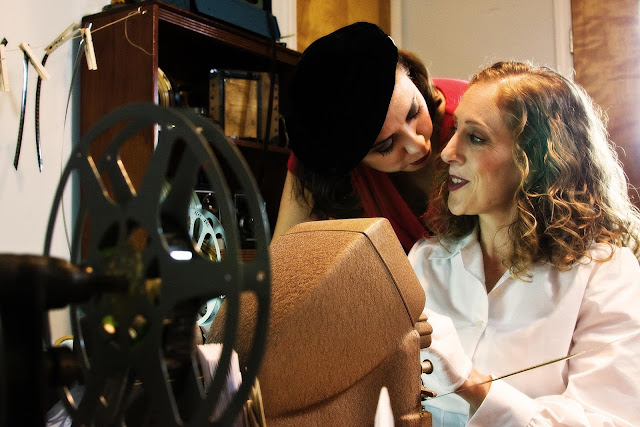 EVENTS
The Thursday performances of May 5 and May 12 will offer pay-what-you-can admission.
Sunday, May 8, stick around after the show for a post-show dessert buffet, featuring an array of tasty treats, homemade by the BWBTC ensemble. Delicious and free!
Wednesday, May 11, join us for “Cookies and Collaboration,” a post-show discussion with playwright Barbara Lhota.
Wednesday, May 11 and Wednesday, May 18 will be Industry Nights, offering ½ price tickets to anyone with proof of industry affiliation.
All closing weekend, May 18-21, BWBTC will be collecting monetary donations for the Pro Bono Network (http://www.pro-bono-network.org/)
Additional discounts and deals will be offered on BWBTC’s Facebook page: https://www.facebook.com/bwbtc

180 Degree Rule is a 2013 graduate of BWBTC’s Fighting Words script development program, was a finalist in the 2013 Pride Series Women’s Work Competition (for works by women with lesbian characters or themes), and was hosted for a final public reading by Chicago Dramatists.
This production has been awarded grants by the Arch and Bruce Brown Foundation and the Dramatists Guild Fund.

About the Company
Babes With Blades Theatre Company uses stage combat to place women and their stories center stage. Through performance, script development, training, and outreach, our ensemble creates theatre that explores the wide range of the human experience, and cultivates broader perspectives in the arts community and in society as a whole.
Posted by Bonnie Kenaz-Mara at 5:07 PM