Pound key... number sign... hashtag... An octothorpe by any other name would sort as sweet!

If you want to sound like a brainiac and truly impress, break out the bonus points, 3 syllable word for that ubiquitous little sign-- octothorpe... reputed to literally mean 8 fields.   The mysterious octothorpe is of unknown origin according to Webster's dictionary, and it's first known use was in 1971. Wikipedia claims it was originally a mapmaking symbol denoting a village surrounded by... yep, 8 fields.

"When did it stop being the pound sign?   Who renamed it and why?" retorted my luddite husband.

My husband replied, "It used to be a symbol on touch tone phones when they first changed from dials, and when the idea of push button banking and automated menus was new.  But I don't get why it got renamed.   It's still a pound sign to me... not a hashtag (spoken with dripping disdain)."

The voice of reason spoke (that would be me).  "Before that even, it was commonly know as number sign, as in, we're #1. If you're going to get all huffy about pound vs. hashtag linguistics, why did it get renamed pound key instead of just sticking with number sign for a name, eh? Maybe the title's an escalation in rank."

"I'm trending on Twitter" my husband is fond of blurting out at random inappropriate times, which is all the more amusing because he's the anti-twit if there ever was one.  He DOES actually have a Twitter account I set up for him, but I think the crickets are audibly chirping on his blank page.   If he were actually "TRENDING ON TWITTER" it would all be due to the octothorpe.

"But I don't get it.   Why do people hashtag EVERYTHING?   What's the point?" asked my son who knew the term octothorpe, but has no clue what they DO.

In case you're confounded by the pound sign, or preoccupied by the octothorpe, too, here's the scoop.

"They spawn comedy... annoy people.   But seriously, it's also like a giant sorting work. Hashtags make social media posts go places.   They make posts pop on the Twitter feeds & Facebook pages of those they refer to, make our glut of on line info into some semblance of searchable order, and keep event posts flowing in the same stream of quantifiable data."   As annoying as they may be, they are crucial to my line of work in social media and once people "get" how to use them it makes a LOT of sense.

Media Bistro has a pretty cool summation here too.   Click this link for the full deal.  I've put an excerpt below.

The hashtag as we know it was born in August 2007, when designer Chris Messina, the self-described “hash godfather,” asked his Twitter followers what they thought of using the pound sign to group conversations on Twitter.
Six years later, hashtags are completely integral to social media, having spread beyond Twitter to Facebook, Google+, Pinterest, Instagram and even farther (including real-world conversations). Hashtags add context, humor, organization and the potential for virality to your tweets.
But what was the life of the hashtag before Twitter made it famous?
The following infographic created by graphic designer Angela Liao of 20px depicts the journey of the hashtag pre-Twitter. 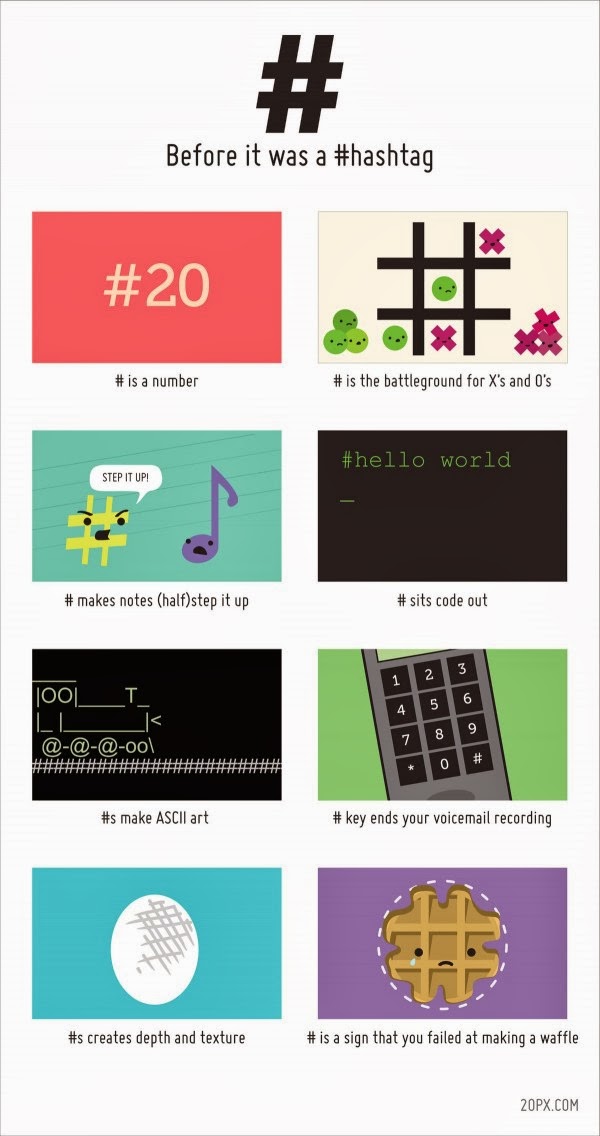 We'll leave you with a YouTube clip of #Hashtag from Late Night with Jimmy Fallon.


Love it or hate it, the octothorpe has infiltrated our society, and this most powerful of punctuations is here to stay!