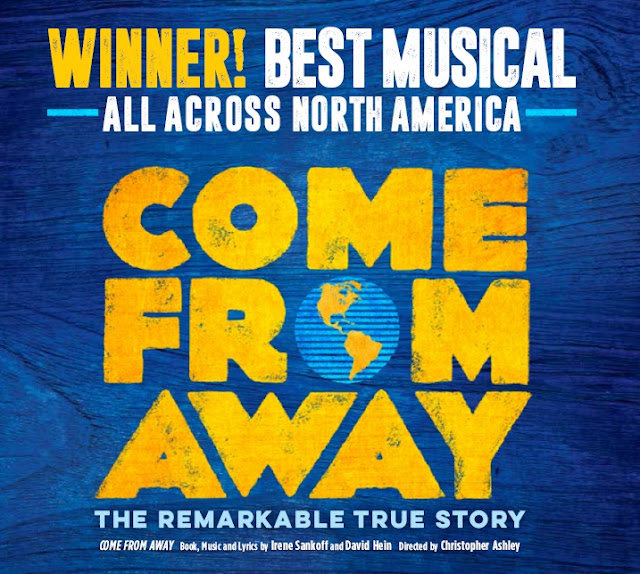 Here at ChiIL Mama, we adore COME FROM AWAY and are eager to see it again on opening night, February 23rd. Check back soon for my full review. A close friend of mine, Flo and her mother experienced the true story this musical is based on in real life. They were enroute back to Chicago from Greece when the 9/11 attacks happened and their plane was diverted to Gander! Check out this award winning musical that will renew your faith in human kindness and humankind.

Broadway In Chicago is thrilled to welcome COME FROM AWAY, a Broadway musical about the true story of the small town that welcomed the world, back to Chicago by popular demand at Broadway In Chicago’s Cadillac Palace Theatre (151 W. Randolph Street) for a limited engagement from February 22 through March 6, 2022. COME FROM AWAY tickets are on sale now!

It touches the heart, and Chicago audiences are loving it!”

COME FROM AWAY tells the remarkable true story of 7,000 stranded passengers and the small town in Newfoundland that welcomed them. Cultures clashed and nerves ran high, but uneasiness turned into trust, music soared into the night, and gratitude grew into enduring friendships.

Apple Original Films’ filmed version of the Tony & Olivier Award-winning hit musical COME FROM AWAY, produced by eOne, Hasbro’s entertainment studio, will premiere globally on Apple TV+ on Friday, September 10. COME FROM AWAY, which marks the first Broadway show to be streamed by Apple TV+, is directed by Tony Award-winner Christopher Ashley, who directed the original Broadway production, and stars an ensemble cast led by members of the Broadway show. The live performance of COME FROM AWAY was filmed in New York at the Gerald Schoenfeld Theatre in May 2021, where the Broadway production is staged, for an audience that included 9/11 survivors and front-line workers; and, employed over 200 people including members of the Broadway crew, staff, and creative teams.

COME FROM AWAY was originally co-produced in 2015 by La Jolla Playhouse and Seattle Repertory Theatre, and presented in 2016 by Ford’s Theatre in Washington, DC and Mirvish Productions at the Royal Alexandra Theatre in Toronto, CA. COME FROM AWAY (NAMT Festival 2013) was originally developed at the Canadian Music Theatre Project, Michael Rubinoff Producer, Sheridan College in Oakville, Ontario, Canada and was further developed at Goodspeed Musicals’ Festival of New Artists, in East Haddam, CT. The Canada Council for the Arts, The Ontario Arts Council, and the Fifth Avenue Theatre in Seattle WA also provided development support.

Tuesday-Friday at 7:30 pm (with 2 pm matinees on Wednesdays)

Broadway In Chicago was created in July 2000 and over the past 21 years has grown to be one of the largest commercial touring homes in the country.  A Nederlander Presentation, Broadway In Chicago lights up the Chicago Theater District entertaining more than 1.7 million people annually in five theatres. Broadway In Chicago presents a full range of entertainment, including musicals and plays, on the stages of five of the finest theatres in Chicago’s Loop including the Cadillac Palace Theatre, CIBC Theatre, James M. Nederlander Theatre, and just off the Magnificent Mile, the Broadway Playhouse at Water Tower Place and presenting Broadway shows at the Auditorium Theatre.

COVID-19 Protocol:  Audience members are required to be masked and show proof that they are fully vaccinated. Those with exemptions, including children, must show proof of a negative COVID-19 test. Vaccine cards and negative COVID-19 test must be shown along with a photo I.D. and valid ticket. No home tests are accepted and due to COVID-19 protocol, children under 2 are not allowed into the theatre. For further information including types of vaccines or testing details visit BroadwayInChicago.com/COVID19.

All Broadway In Chicago schedules, productions, and protocols for attendance will continue to be reviewed as further guidance and recommendations are provided by the CDC, Illinois State, and Chicago Departments of Health. For the latest health and safety procedures and guidelines, visit www.broadwayinchicago.com/covid19.

For more information about the show visit: https://comefromaway.com/

Connect with COME FROM AWAY on

Posted by Bonnie Kenaz-Mara at 1:29 PM