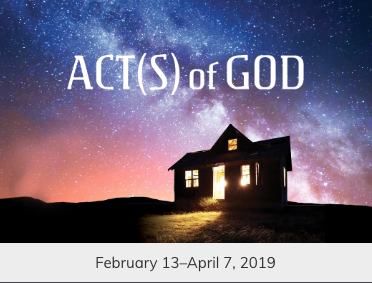 Act(s) of God is recommended for ages 13+

“The force, “God,” acts in the play much as in life: invisibly, mysteriously. And so the fun of it all has to do with how God (whether externalized, internalized, or altogether put aside) works on the family—how it brings them together or pulls them apart…much as in life,” notes playwright Kareem Bandealy.

“At its core, this is a dark comedy about family and how we navigate these deep and at times tricky relationships when our views don’t align. This show is about so much more than whether or not you believe; it’s about our most basic connections to one another, and Kareem’s sharp writing and wit gives us the perfect access point to a subject that has made more than one family dinner take a turn toward awkward,” comments director Heidi Stillman.

About the Artists
KAREEM BANDEALY (Playwright/Lookingglass Ensemble Member) has previously appeared at Lookingglass as Captain Nemo in 20,000 Leagues Under the Seas, Blood Wedding, Moby Dick (2015 & 2017), The Little Prince, Big Lake Big City, Bengal Tiger at the Baghdad Zoo, The Last Act of Lilka Kadison, and Peter Pan (A Play). Chicago credits: A Christmas Carol (2014–18), Rock ‘N’ Roll, Gas For Less and King Lear at Goodman Theatre; The Wheel at Steppenwolf Theatre Company; Oklahoma! at Paramount Theatre; The Good Book and The Illusion at Court Theatre; Julius Caesar, Hamlet, The Caretaker, and Heartbreak House at Writers Theatre; A Midsummer Night’s Dream, Edward II, and Romeo and Juliet at Chicago Shakespeare Theater; A Disappearing Number, Blood, and Gifts at TimeLine Theatre; The Skin of Our Teeth and The Real Thing at Remy Bumppo Theatre Company; Othello (as Othello) at The Gift Theatre, and many others. Regional credits include: The Merry Wives of Windsor, The Three Musketeers and The Tempest at Illinois Shakespeare Festival; Love’s Labour’s Lost at Notre Dame Summer Shakespeare; Julius Caesar and Stuff Happens at Pittsburgh Irish & Classical Theatre, and four seasons with Orlando Shakespeare Theater. He has appeared in several films including The Merry Gentleman directed by Michael Keaton, in the new web series Code-Switched, and on TV in Chicago Fire. Kareem is a recipient of the 2011 3Arts Artist Award.

HEIDI STILLMAN (Director/Lookingglass Ensemble Member/Artistic Director) recently directed the return of her adaptation of Hard Times. She has both written and directed for Lookingglass: Cascabel, The North China Lover, Hephaestus, The Brothers Karamazov (2009 Raven Award), and The Master and Margarita. Additional writing credits with Lookingglass include: The Last Act of Lilka Kadison, The Old Curiosity Shop (Jeff Award for Adaptation), and The Baron in the Trees. Directing work with Lookingglass includes: Death Tax, Bengal Tiger at the Baghdad Zoo, Trust, The Wooden Breeks, and Hillbilly Antigone. Heidi’s adaptation of The Book Thief premiered at Steppenwolf Theatre Company. She directed Minita Gandhi’s Muthaland for Silk Road Rising Solos and Victory Gardens Theater’s Ignition Festival, CAATA/ConFEST, and at 16th Street Theatre. She co-wrote and directed The Year I Didn’t Go to School at the Chicago Children’s Theatre. Heidi lives in Evanston with her husband and her 15 year olds, Sadie and Jude.

ATRA ASDOU (Fiancée/Lookingglass Artistic Associate) happily returns to Lookingglass after replacing Ensemble Member Louise Lamson as Rachel in Hard Times. Previous Lookingglass credits include Blood Wedding and Bengal Tiger at the Baghdad Zoo. Chicago theatre credits: Belle in A Christmas Carol (Goodman Theatre), Julia in 1984 (Steppenwolf for Young Adults), Dirty (The Gift Theatre), and she just came back from Washington, D.C. where she performed in The Second City’s She The People (Woolly Mammoth Theatre Company). Atra regularly improvises and writes sketches at iO Chicago with Whirled News Tonight, Lil’ Tooties, and iOCN. She has also performed sketch comedy as understudy for The Second City E.T.C.’s 40th revue and is a 2017 Bob Curry fellow. TV/Film/Webseries: Chicago Med, Chicago P.D., South Side, Renee, and Other People’s Children. Atra is a graduate of Loyola University Chicago and is represented by Gray Talent Group.

WALTER BRIGGS (Youngest/Lookingglass Artistic Associate) has previously appeared with the company in 20,000 Leagues Under the Seas, Moby Dick, Bengal Tiger at the Baghdad Zoo and The North China Lover. Chicago credits include: Sucker Punch (Victory Gardens Theater), Hit The Wall (The Inconvenience/Steppenwolf Theatre Company), All Our Tragic (The Hypocrites), The Glass Menagerie (Mary-Arrchie Theatre Co.), A Red Orchid Theater, and many more. Regionally, Walter has performed at A.R.T, Arena Stage, South Coast Repertory, Alliance Theatre, and The Getty Villa. TV/Film credits include: Chicago Med, Kappa Force, Jessica, I Don’t Care, A Good Person, Ballad, and Older Children. Walter is a graduate of the Chicago College of Performing Arts at Roosevelt University.

ANTHONY IRONS (Middle/Lookingglass Artistic Associate) is thrilled to return to Lookingglass in this exciting new work. He appeared in Treasure Island and, most recently, The Steadfast Tin Soldier. Anthony is also a Congo Square Theatre Ensemble Member, where he has performed in over a dozen productions. Chicago credits include: Support Group for Men (Goodman Theatre), How to Use a Knife (Shattered Globe Theatre, Jeff Nomination), Jitney (Congo Square Theatre, Jeff Nomination), and Waiting for Godot (Court Theatre). Regional credits include: Black Eagles (Penumbra Theatre), Hamlet (Illinois Shakespeare Festival), and As You Like It (Georgia Shakespeare Festival). TV/Film credits include: Empire, The Chi, Sirens, Chicago Fire, Boss, Let’s Go To Prison, and The Lucky Ones.

KRISTINA VALADA-VIARS (Eldest) is making her Lookingglass debut in Mr. Bandealy's beautiful play. Most recently, she appeared in Make Believe Association’s The Lost Books, directed Small Jokes About Monsters at 16th Street Theatre, and appears in The Red Line on CBS. Theatre credits include: Steppenwolf Theatre Company, Goodman Theatre, Writers Theatre, Theater Wit, Route 66 Theatre, Northlight Theatre, About Face Theatre, New Dramatists, The New Group, and 13P. TV/Film: Easy, Empire, Shameless, The Force, and Stephen Cone’s Black Box. She received a Jeff Nomination for Supporting Actress for her work in the Chicago premiere of Time Stands Still (Steppenwolf Theatre Company) and the Best Actress in a Feature Award at the Iris International Film Festival for the independent feature Molly's Girl. She received a 2017 Princess Grace Award and Fellowship for acting and directing in residence with Steppenwolf Theatre Company. Kristina is an activist, freelance writer, teacher, and a member of the Chicago Green Theatre Alliance.

Subscriptions
Subscriptions are on sale for the 2018–2019 Season. Performances will be held at Lookingglass Theatre Company, located inside Chicago's historic Water Tower Water Works, 821 N. Michigan Ave. at Pearson.

The Gglasspass is a flex pass available to all ages. For $150, Gglasspass holders receive 3 tickets that can be used in any combination and denomination for any Lookingglass production in the 2018–2019 season.

Lookingglass also offers a 3-play subscription for Accessible performances during the 2018-2019 season for $75. Patrons can choose between the Touch Tour/Audio Described performances or the Open Captioned performances.

Subscription benefits include access to the best seats in the house, pre-sale opportunities and savings to Lookingglass productions before single tickets go on sale to the general public, special perks at restaurant partners, unlimited ticket exchanges, discounted parking at the nearby John Hancock Center, Water Tower Place and Olympia Centre Garage, reduced tuition for Lookingglass’ renowned classes and summer camps, and access to exclusive subscriber-only events. For season subscription and ticket information, call the Lookingglass Theatre box office at (312) 337-0665 or visit lookingglasstheatre.org.

Additional
Programs:
REFLECT Post-Show Panel Series
Dive even deeper into the world of the play with the Lookingglass REFLECT Series!

This specially-curated series of post-show conversations and panels offers audiences an opportunity to think, hear, and talk about the performance they just experienced. Hear in-the-field experts offer their insights and leading artists give a behind-the-scenes glimpse at the Lookingglass creative process. REFLECT post-show discussions are free and open to the public,
and take place directly following the 2:00 p.m. matinee on select Sundays at Lookingglass Theatre.

Student tickets are available the day of the show for $20 with a valid student ID. Based on availability.

About Lookingglass Theatre Company
Inventive. Collaborative. Transformative. Lookingglass Theatre Company, recipient of the 2011 Regional Theatre Tony Award, was founded in 1988 by eight Northwestern University students. Now in its 31st Season, Lookingglass is home to a multi-disciplined ensemble of artists who create story-centered theatrical work that is physical, aurally rich and visually metaphoric. The Company has staged 67 world premieres, received 151 Joseph Jefferson Award Nominations, and work premiered at Lookingglass has been produced in New York City, Los Angeles, Seattle, Berkeley, Philadelphia, Princeton, Hartford, Kansas City, Washington D.C., Atlanta, Louisville and St. Louis. Lookingglass original scripts have been produced across the United States. In 2016, Lookingglass received the MacArthur Award for Creative and Effective Institutions and in 2017, was the recipient of the League of Chicago Theatres’ Artistic Achievement Award.