CHICAGO TAP THEATRE UPDATES ITS HOLIDAY SPECTACULAR, TIDINGS OF TAP!, WHICH RETURNS TO
THE NORTH SHORE CENTER FOR THE PERFORMING ARTS, DECEMBER 9 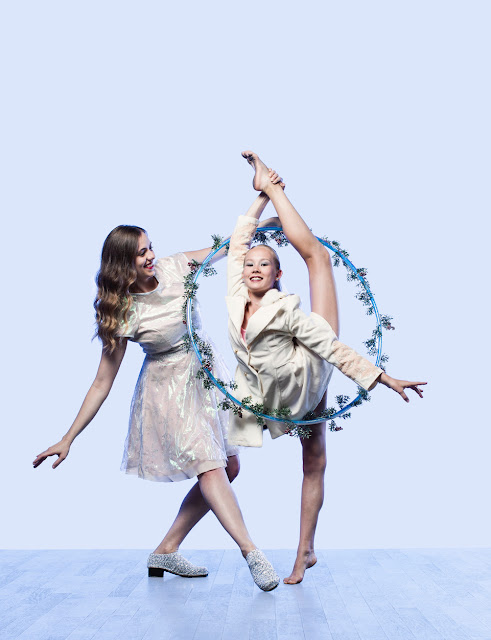 Chicago Tap Theatre makes a major narrative step this year, taking Tidings of Tap! from what was once a holiday revue to a complete production with a strong structure and engaging plot. The story features an expanded role for nationally ranked rhythmic gymnast Dasha Merkulov as well as significant production values. This is the third year that CTT will return to the North Shore Center for the Performing Arts, after receiving rave reviews and record-breaking attendance for the Company the previous two years. SeeChicagoDance said “It’s charming and gleeful and heart-rending at times.” Tidings of Tap! has been described by the Chicago Tribune as “undeniably charming and wholesome fun.” Tidings of Tap! is choreographed by Yonally, Kirsten Uttich, Richard Ashworth and Caleb Teicher and is a performance that captures the spirit of the holidays through joyful noise—celebrating Christmas, Chanukah, New Year’s and the winter season. 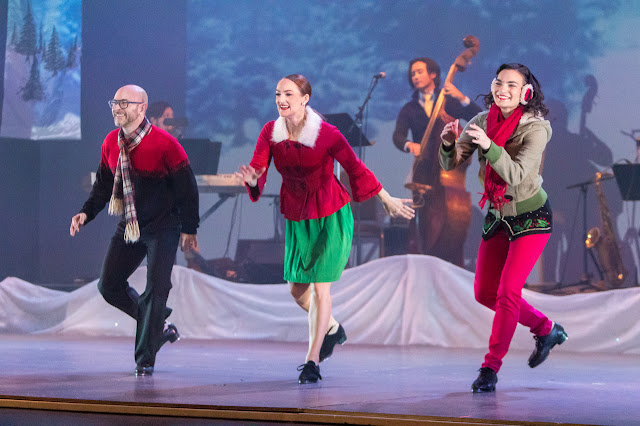 Artistic Director Mark Yonally and Chicago Tap Theatre (CTT) bring audiences live music, a touch of magic and boundless energy with the return of their annual Tidings of Tap!, a warm and wondrous celebration of tap dance and the winter season, Sunday, Dec. 9 at 3 p.m. at the North Shore Center for the Performing Arts, 9501 Skokie Blvd., Skokie, IL. Tickets range from $25 – $41 and are available now. Group discounts are also available for groups of 10 or more.

“This year we are structuring the show around the holiday season in a much more overt way. Beginning with that first blinding snowstorm, continuing into the warmth of Chanukah, the spirit of Christmas and the sheer joy of New Year’s Eve,” said Yonally. “Audiences will also get to see more of the amazing acrobatic skills of Dasha, who is one of the top-ranked Rhythmic Gymnasts in the country. This year they will get to see her use all of her skills in helping tell the
story and engage the audience, young and old alike,” concluded Yonally.

Children will even have the opportunity to be in the show this year, thanks to the expanding Chicago Tap Theatre Fall Intensive, which will be a two day event November 17 and 18 offering rhythm-loving kids the chance to learn technique, tap history and a short dance that will be incorporated into Tidings of Tap! CTT has been making a name for themselves in the past three years as leaders in tap dance pedagogy. “Students will always learn a mix of technique, theory, choreography, history and music knowledge at every one of our educational intensives, and at the Fall Intensive they will learn a dance they can perform in Tidings of Tap!,” added Yonally.

Now in its 16th year, Chicago Tap Theatre prides itself on breaking the mold of traditional tap dance and does the same with holiday entertainment. “Dance has the ability to bridge gaps and bring people together which is especially important at this time of year,” said Yonally. “CTT is excited to return with this holiday production, as it has become one of our favorite things seeing familiar faces and families attending year after year celebrating their holidays with us. This year audiences will feel the magic of the Holidays more than ever in Tidings’ home at the North Shore Center.”

ABOUT CHICAGO TAP THEATRE
Founded in 2002, Chicago Tap Theatre is a growing and vibrant dance company dedicated to preserving the quintessentially American dance form of tap while taking it to the next level of creativity, innovation and quality. CTT performs exclusively with live music provided by some of Chicago’s finest musicians playing everything from Duke Ellington to David Bowie and many artists in between. Under the dynamic direction of master teacher and performer Mark Yonally, CTT has gained a loyal and sizable following in Chicago and continues to tour both nationally and internationally. Having pioneered the “tap opera” format, which tells stories with compelling characters and intriguing plots, CTT has used the language of tap dance, live music and narration to move Chicago audiences for over 10 years. 847.673.6300 or ChicagoTapTheatre.com.