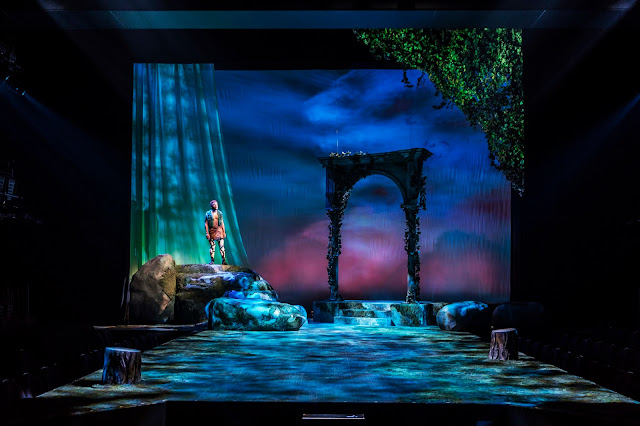 Disclosure: Thanks to Chicago Shakespeare Theatre for partnering up with ChiIL Mama once again and providing complimentary tickets for review purposes and for our giveaway. As always, all opinions are our own.

Congrats to Maryellen C. who won 4 tickets (up to $136 value)
To Short Shakespeare! A Midsummer Night’s Dream From ChiIL Mama Out Of 230 Entries.
Check back with us early and often for great giveaways, original reviews, interviews, photo recaps, entertainment news, and more, in Chi, IL and beyond. 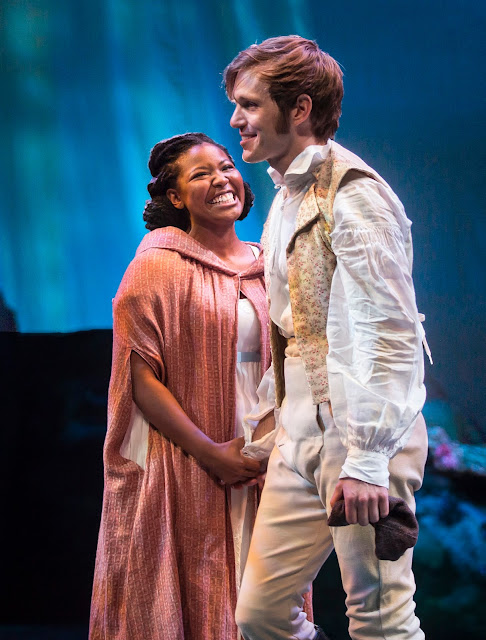 “The course of true love never did run smooth,” according to Lysander, one of the confused lovers in this charming production of A Midsummer Night’s Dream. But this abridged version, at 75 minutes, does run smoothly and somehow does not feel like Shakespeare’s story is slighted in the least.

The show is intended to be very family-friendly, and it was encouraging to see so many children in the audience. In fact, the introduction by actress Christiana Clark reviews basic rules of etiquette for the young crowd, such as reminding viewers that this isn’t television, the actors can hear you. “So if a cell phone goes off over here, you open a bag of Doritos over there, or you are arguing over whether to watch the Super Bowl or the Puppy Bowl,” the actors hear it. (A cell phone kept buzzing, incredibly loudly, when I saw the play Nice Girl, last week at Raven Theater. Perhaps more grown-ups need this refresher course, too.) She also encouraged audience positive feedback because “your reactions fuel our performance.” One of my favorite moments in the show was when Bottom threw his arms wide while in “rehearsal” for the play-within-a-play of Pyramus and Thisbe. In a bit of physical comedy, he hit “Thisbe” twice, and a little kid in the audience kept giggling, showing how Shakespeare can be accessible for all. 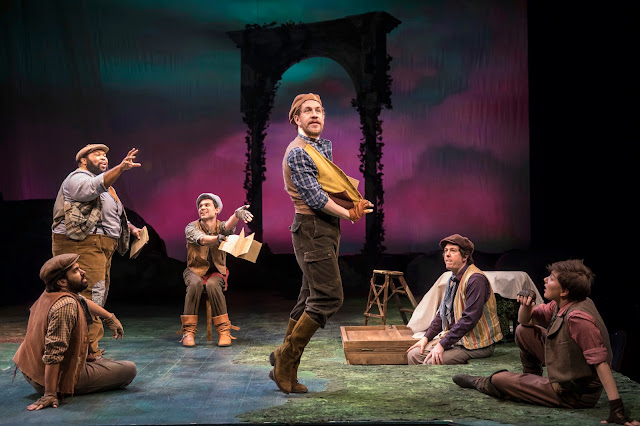 Midsummer is one of my favorite Shakespeare plays, ever since my teen years when I was in a community theater production as Hippolyta. It was amazing how fresh and clever this production is and how the cast elicits laughs in unexpected places. The “amateur theatrical troupe of local workers” rehearsing and performing their ridiculous play for the finale was especially funny. When their roles are assigned by Peter Quince, they obviously had no idea what the play was about, and it was delightful to watch their comfort levels grow into the roles. The “lion” is extremely shy and timid as a kitty initially, but by the end, she is roaring at random and enjoying startling people. Adam Wesley Brown as Bottom is appropriately over-the-top from the get-go; his performance is just a hoot, especially his overly dramatic death scene as Pyramus, which rivals any opera diva’s demise. 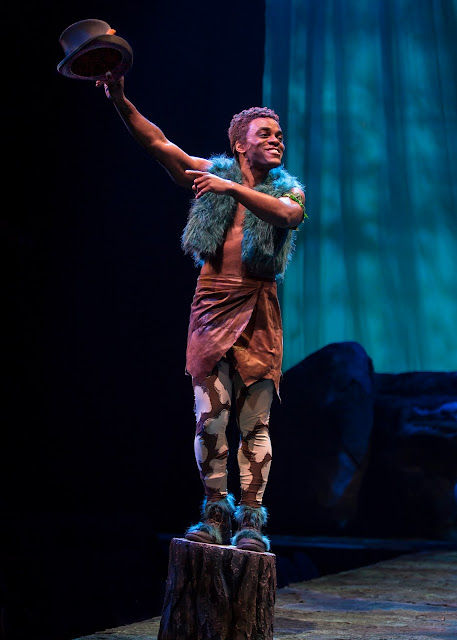 
Many of the actors doubled up on their roles. Ms. Clark and Sean Fortunato have a great chemistry as both Duke Theseus and his bride, then the fairy world’s Oberon and Titania.(Their costumes in the fairy world were especially cool, as Titania arms seemed to be covered in bark like the limbs on a tree. Bottom gets a cape to wear covered in flowers which had been Tatiana’s blanket during her long slumber.)  After the performance, there was a question-answer session with the cast. A child asked if it is hard to play two roles. The actor replied that it is fun to be someone else, and in this show, they got to do that twice. 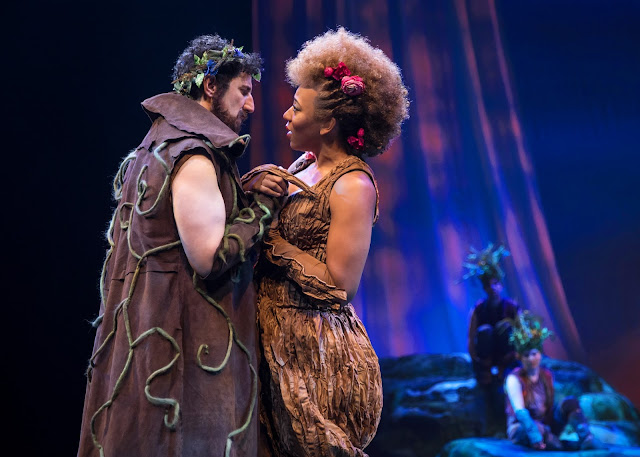 The king and queen of the fairies, Oberon (Sean Fortunato) and
Titania (Christiana Clark) come face to face.

My teen companions loved the show, and I asked them their favorite parts. Our friend Camelia liked the physical comedy, like when there was a reference to Helena’s tall stature, and the actress, who was already on a high rock, threw her arms up to be even taller. My daughter Savannah liked the sound effect of the magical droplet being placed by Puck into sleeping eyes. A young audience member asked why all the characters at the end got married. Lysander replied simply:”Because they were in love.” 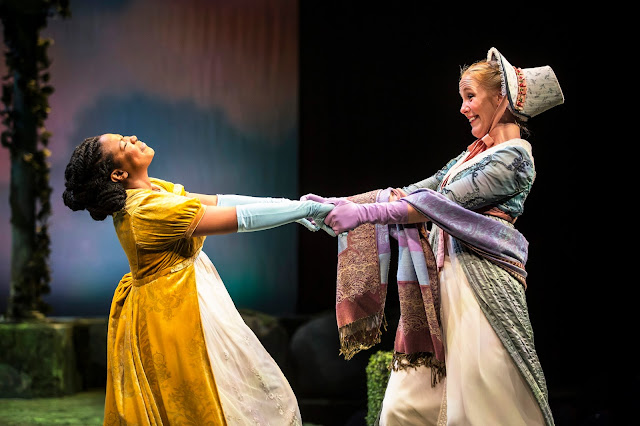 Here at ChiIL Mama and ChiIL Live Shows we've been fervent fans of Chicago Shakespeare Theater (CST) for so many decades we've seen them perform A Midsummer Night’s Dream in it's entirety and as a Short Shakespeare 75-minute abridgment, several times over the years. Each production is fresh and new, and this 2018 version is extra exciting, because it's the first Shakespeare play to be performed in their new space, The Yard! Never fear, despite it's name, The Yard is indoors, heated, and awesome. 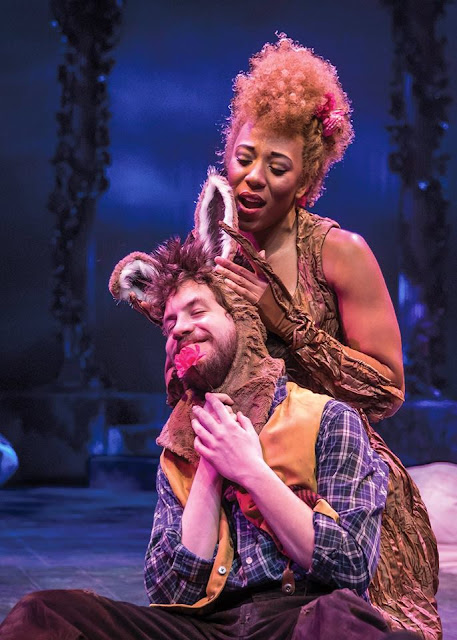 An enchanted Titania (Christiana Clark) is overcome with desire for Bottom (Adam Wesley Brown), who has been transformed into an ass by a spell.
Photo by Liz Lauren. 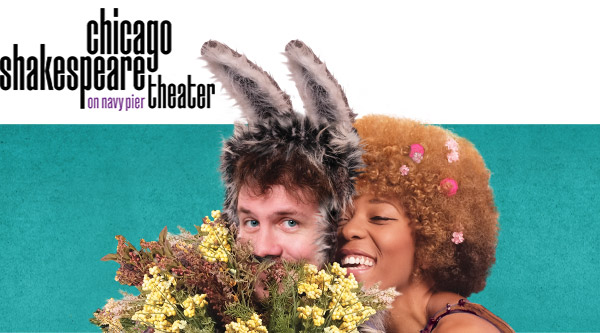 ChiIL Mama will be ChiILin' at Chicago Shakespeare Theater for the press opening of Schiller's Mary Stuart, so check back soon for my full review at ChiILLiveShows.com. 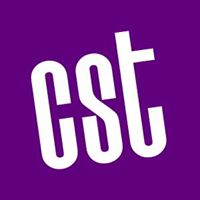 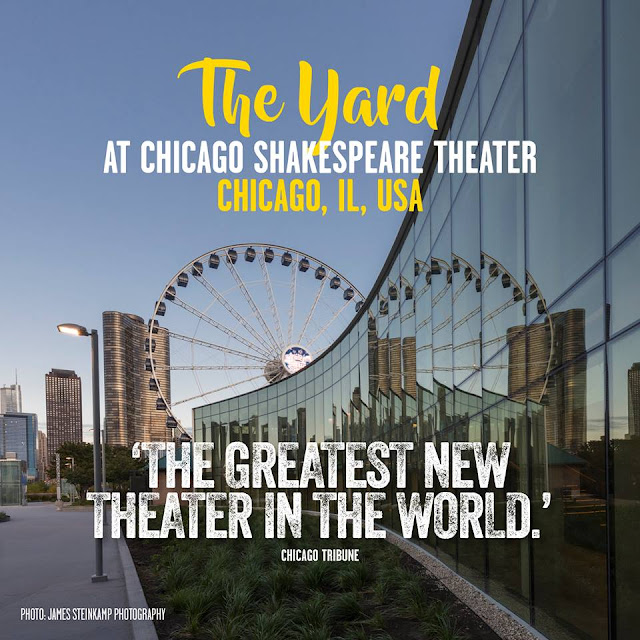 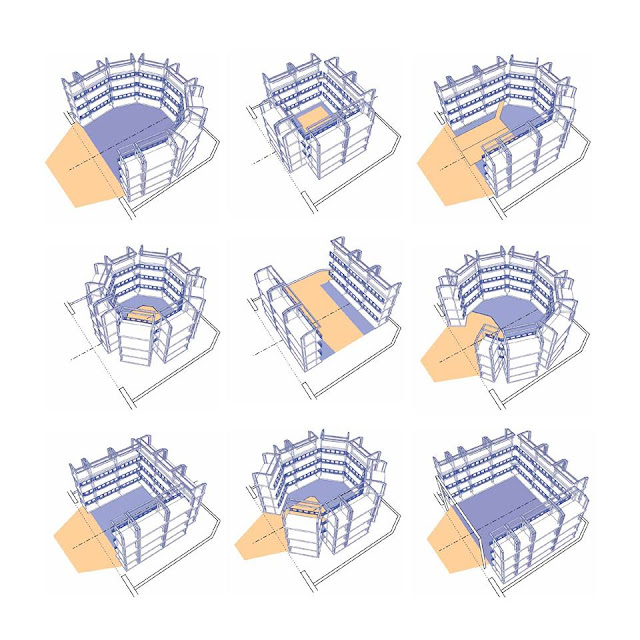 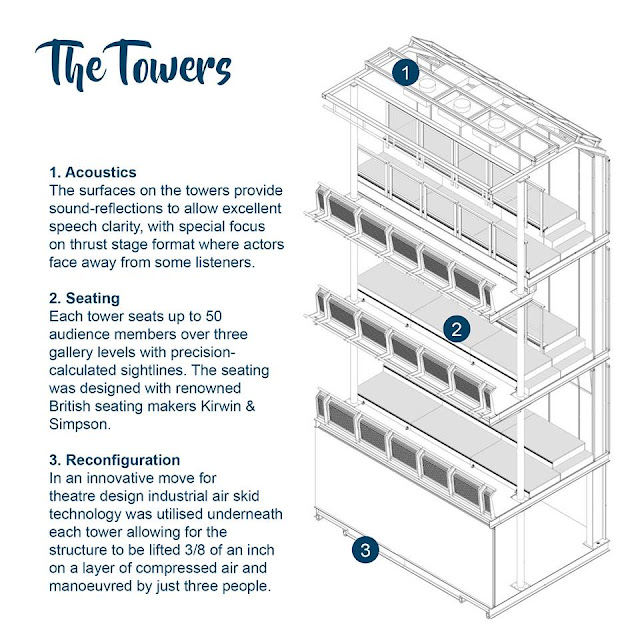 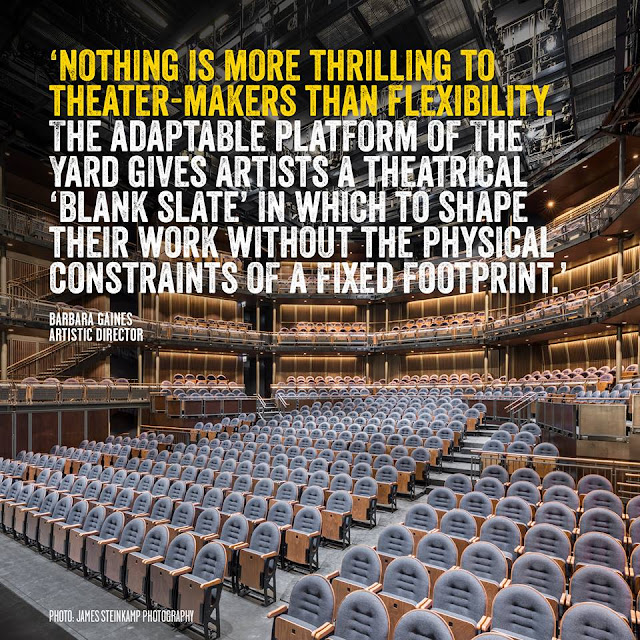 Disclosure: Thanks to Chicago Shakespeare Theatre for partnering up with ChiIL Mama once again and providing complimentary tickets for review purposes and for our giveaway. As always, all opinions are our own.
Posted by Bonnie Kenaz-Mara at 10:05 AM