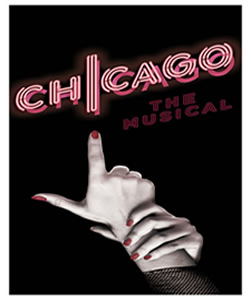 **NOTE: Chicago is suggested for ages 13+ due to sensitive subject matter.**

Tonight, ChiIL Mama will be ChiILin' at Drury Lane Theatre for the press opening of its electrifying new production of Chicago, featuring a book by Fred Ebb and Bob Fosse, music by John Kander, lyrics by Fred Ebb, and based on the play by Maurine Dallas Watkins. We can't wait! We've reviewed the Broadway touring version and look forward to catching Drury Lane's take on this new version. They pull out all the stops and present world class productions that are truly a treat.

Recipient of six Tony Awards®, two Olivier Awards, a Grammy® and thousands of standing ovations across the globe, this razzle-dazzle musical is the #1 longest running American musical in Broadway history. Filled with fame, fortune, and all that jazz, this edge-of-your seat story features one showstopper after another. Join Roxie Hart, Velma Kelly and all of Cook County Jail’s murderess vixens for the sultry “Cell Block Tango,” learn what happens “When You’re Good to Mama,” and watch Billy Flynn “Razzle Dazzle” them all with “We Both Reached For the Gun.” Director William Osetek and choreographer Jane Lanier give a nod to the iconic Fosse flavor in this sizzling new production of Chicago.