ChiIL Mama and the teens will be ChiILin' in downtown Chi, IL tomorrow night, for the press opening of Odysseo by Cavalia. We can't wait! Check back soon for our full review. 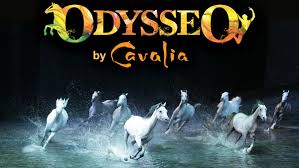 
MAKES FIRST VISIT TO THE MIDWEST;
OPENS IN CHICAGO APRIL 1

The most impressive and immense big top on the planet – part of the largest touring production ever created - has been raised at Soldier Field South Lot in Chicago, in preparation for the much anticipated Midwest debut of Odysseo, the latest theatrical adventure by Cavalia. Following the Montreal company’s original and eponymous production Cavalia, which enjoyed a very successful run in Chicago in 2009, the new $30 million theatrical production imagined by Normand Latourelle will begin its run April 1 with matinee and evening performances through April 23. Odysseo is a veritable revolution in live entertainment that marries the equestrian arts, stage performances, and high-tech theatrical effects in never-before-seen ways. Tickets are now on sale at www.cavalia.com or by calling 1-866-999-8111.

Standing 125 feet tall and covering a surface area of 58,397 square feet - the size of the adjacent Chicago Bears’ football field - Odysseo’s exceptional White Big Top is twice the size of the one that housed Cavalia. The giant tent is a mix of art, technology and advanced engineering. In order to break through the limitations of standard big top tents, allow for more flexibility in the performance area, and to give the horses the space they need to express themselves in all their beauty, Normand Latourelle, Cavalia’s artistic director and founder, partnered with specialized companies in Europe and Canada to create this high-tech structure. By removing the usual supporting masts from the stage and shifting the weight of the structure from the masts to three arches above the tent, this specially designed White Big Top is the best environment for the horses and acrobats to perform breathtaking numbers and for the creative team to design immense staging.

This unprecedented ‘traveling theatre’ is also composed of several exceptional features including its grandiose stage – larger than the United Center ice rink – that enables large-scale, cutting-edge creative performances. Surrounded by bleachers with 2,074 seats, the 17,500-square-foot stage requires 10,000 tons of stone, earth and sand to create so that it offers a vast space of freedom where 65 horses and 48 artists can display their intimate collaboration.

To help immerse the audience in the magical world of Odysseo, images of the most beautiful landscapes from around the world are projected throughout the show onto an 8,400-square-foot screen. Its technical grid, worthy of the largest permanent installations in Las Vegas, New York or London, can support 80 tons of equipment for the stage needs of the show, including a majestic life-sized merry-go-round.

Never afraid of using unparalleled technical, visual, and sound infrastructure, the Odysseo creative team has invented a feast for the eyes, a multi-dimensional spectacle with staggering effects created by state-of-the-art scenery. During the breathtaking finale, a vertiginous virtual waterfall overhangs a lake made possible by an underground drain system that releases 40,000 gallons of recycled water onto the stage, in which horses, riders, and artists join to frolic, leaving behind them the traces of their splashes—and an astonished audience.

The White Big Top is just one part of a larger community; the Odysseo village will take shape over the next few weeks and consists of five tents: the White Big Top, the stable tent, the Rendez-Vous VIP tent, the warm-up & artistic tent, and the kitchen tent serving the 200 employees. In total, 110 semi-trailer trucks will be required to transport the world’s largest touring production to Chicago.

TICKETS – Adult tickets are priced from $34.50 to $144.50 (no service charge). Special pricing and packages also available for groups, children (2-12), juniors (13-17) and seniors (65+). For an extra special outing, the Rendez-Vous VIP package offers the best seats in the house, full meal buffet dining before the show, open bar, desserts during intermission and an exclusive visit to the stables after the show. This unique VIP experience takes place in a tent alongside the White Big Top. The Rendez-Vous VIP package prices range from $144.50 to $269.50 (no service charge).

ABOUT CAVALIA INC. - Cavalia Inc. is an entertainment company that specializes in the creation, production and touring of innovative shows. Founded by Normand Latourelle, the company reimagines the equestrian and theatrical arts. With its headquarters in Montreal, Cavalia Inc. is an integral part of Canada’s cultural heritage, and the largest Canadian-owned cultural enterprise. Its expertise in high technology, multimedia and special effects creates magical, unique, never-before-seen experiences. Its first show, Cavalia, has been seen by more than 4 million people across North America, Europe, Australia, the Middle East and Asia since its 2003 debut. Odysseo, the company’s second show, has toured to rave reviews and public acclaim since its 2011 premiere.