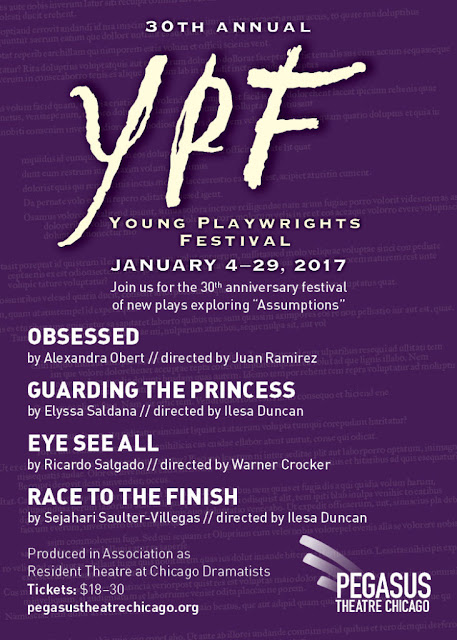 Written by High School Students and Given a Staged Professional Production, this Year’s Plays Explore the Theme of “Assumptions”

We'll be out Pegasus Theatre Chicago's opening night of the 30th Young Playwrights Festival this Sunday and the fest is one of our top picks for the weekend here at ChiIL Mama and ChiIL Live Shows.

The competition received 600 submissions in 2016 with this year’s selections being Alexandra Obert of Lincoln Park High School and her play Obsessed; Elyssa Saldana of Whitney Young Magnet High School, Guarding the Princess; Ricardo Salgado of Lane Tech Academy, Eye See All and Sejahari Saulter-Villegas of Kenwood Academy, Race to the Finish.

Previews are currently going on through Saturday at Pegasus’s resident home Chicago Dramatists, 773 N. Aberdeen. This year’s world premieres, written by high school students and given a staged professional production, explore the theme of “Assumptions.” Each winning production is performed in tandem Fridays and Saturdays at 7:30 p.m. with weekday student matinees.

The Young Playwrights Festival, the second oldest such festival in the United States, has for 30 years engaged and inspired high school students across Chicago by teaching them to craft one-act plays. Under the auspices of Pegasus Theatre Chicago, the winning teen playwrights’ productions are work-shopped and staged as part of its main stage season. The competition enhances language arts, encourages independent, high-level thinking, strong personal values and influences career development for Chicago’s teens. 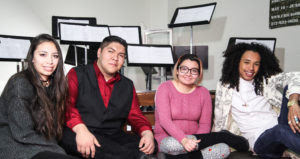 Obsessed
By Alexandra Obert -- Lincoln Park High School – teacher Ahoo Kosari
Directed by Juan Ramirez
A barista believes that he has met the woman of his dreams. Things take a nasty turn when he becomes obsessed with her.

Guarding the Princess
By Elyssa Saldana -- Whitney Young High School – teacher Elizabeth Graf
Directed by Ilesa Duncan
Eadweard the Dragon guards his beloved princess from all potential suitors, whether a good match or not.

Eye See All
By Ricardo Salgado -- Lane Tech Academy – teacher Kirsten Hanson
Directed by Warner Crocker
Jessica, a paranoid conspiracy theorist, drags her brother into a plan to expose a secret society she believes is controlling the world.

ABOUT THE DIRECTORS
Warner Crocker, Eye See All
Warner Crocker recently directed the world premiere of the new musical The Man Who Murdered Sherlock Holmes at Mercury Theatre Chicago. As a producer, director, and playwright his work has been seen on numerous stages in the United States and Russia. He directed the world premiere of The Seven-Per-Cent Solution for City Lit Theatre, Barnum for The Old Creamery Theatre and Boeing Boeing for Circa 21 Dinner Playhouse. Following a 20-year career in Chicago theatre, he served as artistic director of the Wayside Theatre in Middletown, Virginia from 1999 to 2013. In Chicago he was the founder of the Absolute Theatre Company and Plan B Productions, and served as artistic director for New Tuners Theatre and Pegasus Players. A short list of his directing work in Chicago and regionally includes Pentecost, The Kentucky Cycle, Passion, La Bête, Edward II, Good, Kiss Me Kate, Man of La Mancha, Cotton Patch Gospel, Southern Crossroads, Romeo and Juliet, Ballad of the Sad Cafe, Forever Plaid, Othello, Noises Off, Always a Bridesmaid, Tuesdays With Morrie, and Stonewall Jackson’s House. He is the recipient of a number of Joseph Jefferson Awards and other awards for his work as a director and designer. He is the author of Robert E. Lee and John Brown: Lighting the Fuse; the musicals Southern Crossroads and Southern Crossroads: New Orleans, a musical version of A Christmas Carol with composter Steve Przybylski, and a musical adaptation of The Three Musketeers with Gregg Opelka.
Ilesa Duncan, Guarding the Princess and Race to the Finish
Ilesa Duncan is the producing artistic director at Pegasus Theatre Chicago. Her other recent directing work includes the world premiere of Jeff-Recommended Rutherford’s Travels, and For Her as a Piano for Pegasus, Broken Fences at 16th Street Theater, the Jeff Award-nominated The Nativity with Congo Square and the Jeff Award-winning Jar the Floor at ETA Creative Arts. Duncan has also worked with Goodman Theatre, Writers Theatre, Victory Gardens Theater, Rivendell Theatre Ensemble, Lifeline Theater, Stage Left and Chicago Dramatists, as well as Contemporary American Theatre Company (Ohio), The Alliance Theatre (Atlanta), Arena Stage (Washington DC) and Lincoln Center Theater (New York). Duncan’s creative nonfiction short stories have been published (Columbia College Chicago) and she’s written poems and screenplays.  For the stage, she co-adapted Rutherford’s Travels from the National Book Award-winning novel Middle Passage, co-wrote and directed Blakk Love: Stoeez of A Darker Hue and facilitated the devised project Do You See What I’m Saying for Chameleon.
Juan Ramirez, Obsessed
Juan Ramirez has been active in film, theater and television for 35 years. As an actor, he has been featured in over 50 films, television shows and stage plays, including a co-starring role on the Chicago based ABC series “Missing Persons.” Ramirez is currently in charge of PanAmerica Performance Works, formerly Latino Chicago Theater Company at The Firehouse. As a director, he has mounted more than 30 stage productions and two feature length films, which he also wrote and produced). The first of these, “Israel in Exile,” was a 2002 Slamdance Film Festival Competition selection that has been screened in France, England, Spain, Cuba, Mexico and across the United States. The second, “Blankverse,” is currently in post-production. Other projects include the completion of two screenplays and the development of several others.

Pegasus is also committed to initiating important conversations through the arts with strong community engagement and socially relevant programming, including the Young Playwrights Festival for high school-age scribes, celebrating its 30th Anniversary in 2017. Pegasus Theatre Chicago has received seventy-seven Joseph Jefferson Citations since its inception.