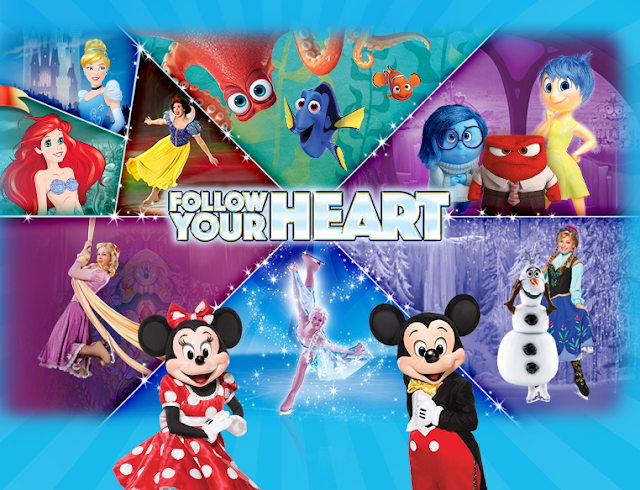 Riley and the Emotions from Disney•Pixar’s Inside Out Also Take the Ice for First Time in Feld Entertainment’s New Ice Extravaganza Coming to the Chicago Area, Jan. 25 - Feb. 12

ENTER HERE for your chance to win a family 4 pack of tickets for January 25th at Allstate Arena.

Enter through midnight on Thursday 1/19. Check back Friday AM when we announce our winner.

The record-breaking hits Finding Dory and Inside Out join the ice skating extravaganza. With Mickey Mouse and Minnie Mouse leading the way, Disney On Ice Follow Your Heart, features scenes and favorite characters from Snow White and the Seven Dwarfs, Toy Story, Frozen and Fantasia. There's something for everyone in a show that features over 60 classic Disney characters. From the wintery world of Arendelle with Anna and Elsa to the deep sea adventures with Dory and Hank, each story tells the tales of self-discovery, courage and compassion.

Disney•Pixar’s record-breaking animated feature Finding Dory makes a splash in Disney On Ice presents Follow Your Heart, coming to the Allstate Arena in Rosemont, Ill., Jan. 25-29, and Chicago’s United Center, Feb. 1-12. Produced by Feld Entertainment, Inc., the action-packed adventure also brings Disney•Pixar’s Inside Out to the icy stage for the first time, together with other beloved Disney characters.

Follow Your Heart allows families to join in on the deep-sea adventure as Dory comes off the screen and onto the ice. With help from Nemo, Marlin and new pal Hank, Dory embarks on a life-changing excursion. The engaging atmosphere of Disney On Ice allows Dory’s humor to take center stage deepening the audience’s existing connection to their favorite forgetful fish. The production will dive into the extraordinary underwater world from Finding Dory, as a vibrant rainbow of digital projection will transform the ice floor into a colorful aquatic paradise.

“What makes this Disney On Ice production so special is the variety of stories about self-discovery, courage and compassion,” said Executive Vice President of Feld Entertainment and Producer of Disney On Ice presents Follow Your Heart Nicole Feld. “Each element of this show was carefully planned so our fans could experience favorite Disney moments while believing in their own destiny.”

Disney•Pixar’s Inside Out makes its Disney On Ice debut as Riley’s Emotions –Joy, Sadness, Anger, Fear and Disgust– reel the audience into the action to help her find the confidence to win the hockey championship and to experience the emotional rollercoaster of growing up alongside Riley. Families are provided the opportunity to easily discuss the feelings children face every day through this live interpretation of Inside Out.

From Snow White and the Seven Dwarfs and Fantasia to Toy Story and Frozen, Disney On Ice presents Follow Your Heart opens up the thrilling world of live entertainment by immersing families in an array of treasured stories. The athleticism of the performers shines through as they embody Rapunzel, Ariel, Tiana and the rest of the Disney Princesses, inspiring children around the world to dream big.

“One of the most magical things about Disney On Ice is the performers’ ability to authentically showcase the best qualities of Disney characters,” said Director Patty Vincent. “At our show, moms and dads are able to witness the production through the eyes of their children, allowing them to reconnect with their favorite characters and making them feel like a kid all over again.”

There’s something for everyone in a show that features 60 characters. The wintery world of Arendelle sets the stage for Olaf and Kristoff as they help reunite royal sisters Anna and Elsa and learn love is the most powerful magic of all. Audiences will celebrate friendship with Buzz Lightyear, Woody, Jessie and more pals from Disney•Pixar’s Toy Story. With Mickey Mouse and Minnie Mouse leading the way, this new Disney On Ice production will excite and amaze fans of all ages.

Visit DisneyOnIce.com for a complete list of Chicago-area show dates.


Feld Entertainment is the worldwide leader in producing and presenting live touring family entertainment experiences that lift the human spirit and create indelible memories, with 30 million people in attendance at its shows each year. Feld Entertainment's productions have appeared in more than 75 countries and on six continents to date and include Ringling Bros. and Barnum & Bailey®, Monster Jam®, Monster Energy Supercross, AMSOIL Arenacross, Disney On Ice, Disney Live! and Marvel Universe LIVE! More information about Feld Entertainment is available online at www.feldentertainment.com
Posted by Bonnie Kenaz-Mara at 11:20 PM