Review: A Gentleman's Guide to Love & Murder Through October 11 at Bank of America Theatre 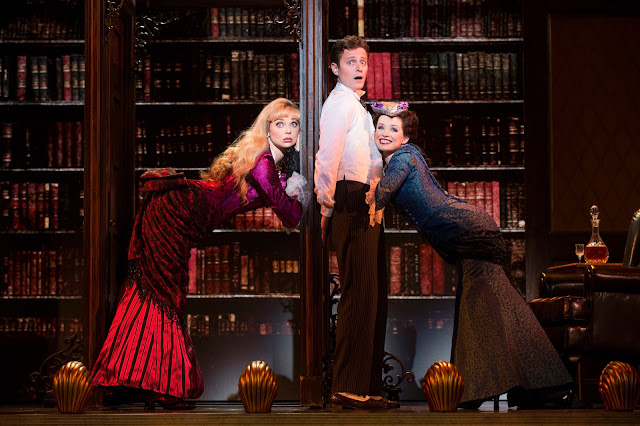 We're completely charmed by this marvelously macabre musical and highly recommend it! This show makes a great parents' night out and a top pick for multigenerational fun. It was our great pleasure to catch opening night in Chicago and we're thrilled to report A Gentleman's Guide to Love & Murder is exceptionally enjoyable and entertaining. It's an absolute must see in a fall filled with impressive productions on the Chicago scene. Don't miss THIS! The tour moves on after October 11th, so don't delay. Book your tickets now, if you haven't already. 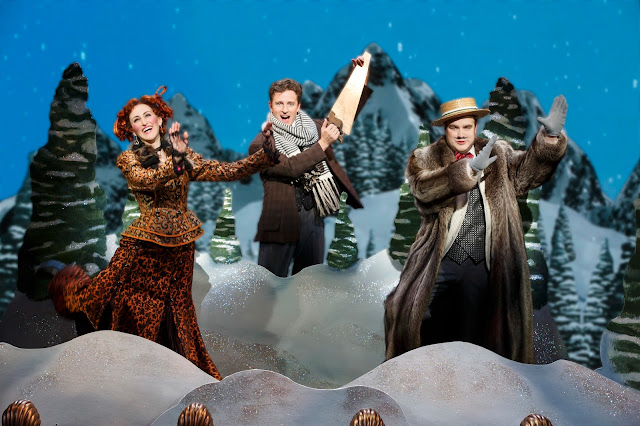 
We had high expectations for the 2014 Tony Award winning musical, A Gentleman's Guide to Love & Murder, but it exceeded our expectations in every way. This show is basically a two man tour de force with a skilled supporting cast. And every element from the set design, costumes, score, live orchestra, and multimedia screens all amplify and showcase the hilarious talents of John Rapson who gets to die on stage 8 times as the eight D'Ysquith heirs, and Kevin Massey as Monty Navarro. 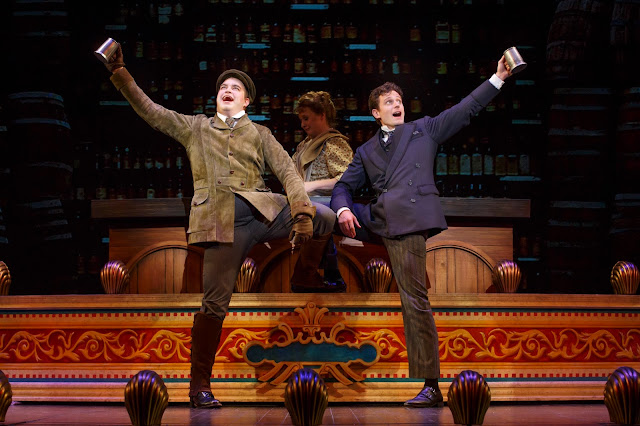 
This is one wacky revenge fantasy, carried out with such creativity and finesse that the audience is absolutely rooting for the mass murderer. Of course you don't want to creep out the very young with a murderous musical, but most kids elementary and up would find this show fabulously fun. 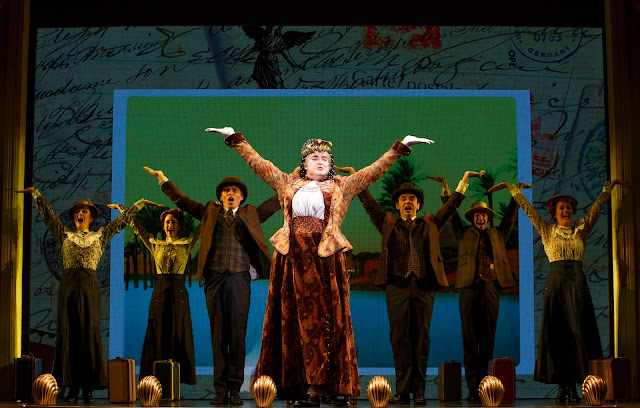 National Touring Company.  The cast with John Rapson as Lady Hyacinth D’Ysquith in a scene from “A Gentleman’s Guide to Love & Murder.” Photo credit: Joan Marcus.

John Rapson was beyond brilliant in the role of the eight D’Ysquith heirs and Kevin Massey charmed everyone as Monty Navarro, with a winning smile and a roughish glint in his eye. The First National Tour previewed at Proctors in Schenectady before beginning performances at Chicago’s Bank of America Theatre (18 W. Monroe) through October 11, 2015. 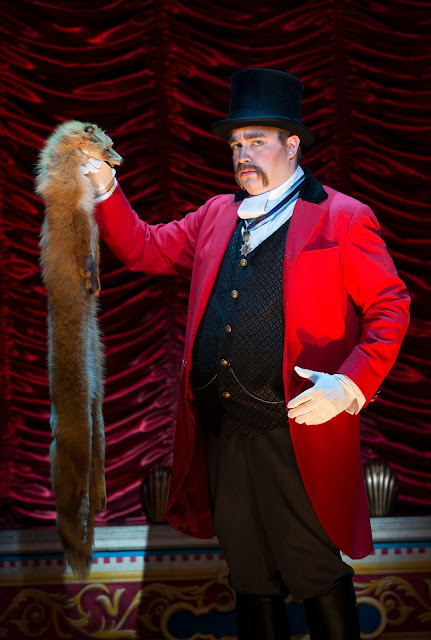 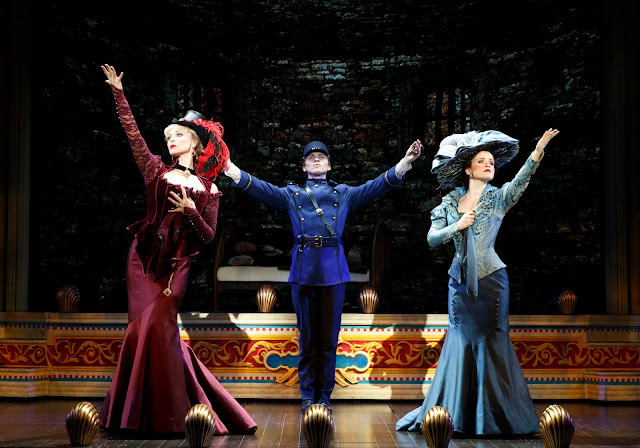 Gentleman's Guide opened at Broadway's Walter Kerr Theatre to overwhelming critical acclaim in November 2013 where The New York Times raved “Gentleman’s Guide will lift the hearts of all those who’ve been pining for what sometimes seems a lost art form.” The Hollywood Reporter enthusedGentleman’s Guide “Restores our faith in musical comedy!” And Time Magazine said “Just as I was about to give up on musicals, along comes A Gentleman’s Guide to Love & Murder!”

JOHN RAPSON (The D’Ysquith Family). Broadway: Les Misérables (Grantaire/Bamatabois, u/s Javert, u/s Thénardier). Tour and Regional: Les Misérables,Disney On Classic (with the Tokyo Philharmonic), Sweeney Todd, Brigadoon. BFA, University of Michigan. Infinite love and thanks to Mom, Dad, Alex, Stella, Chris and the gents of CGF, the family dinner crew, and the utterly extraordinary Gent’s Guide team. Humbled and honored to be part of this brilliant piece. Now and then pigs CAN fly. This one’s for Pat. 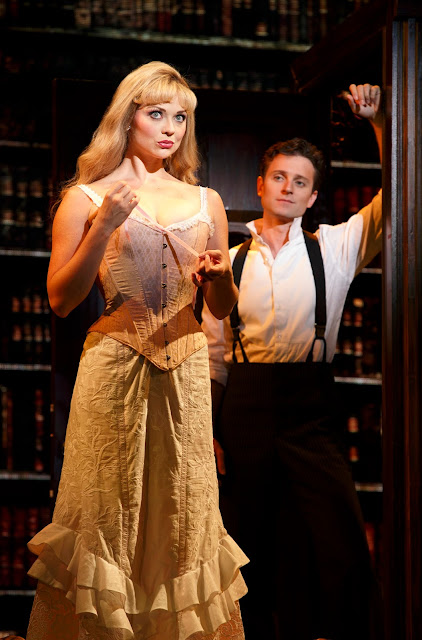 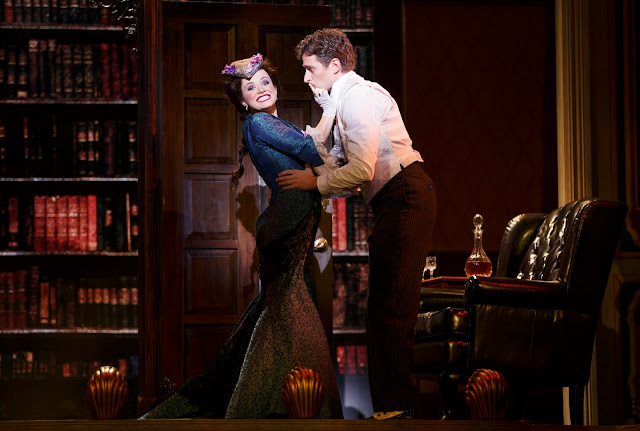 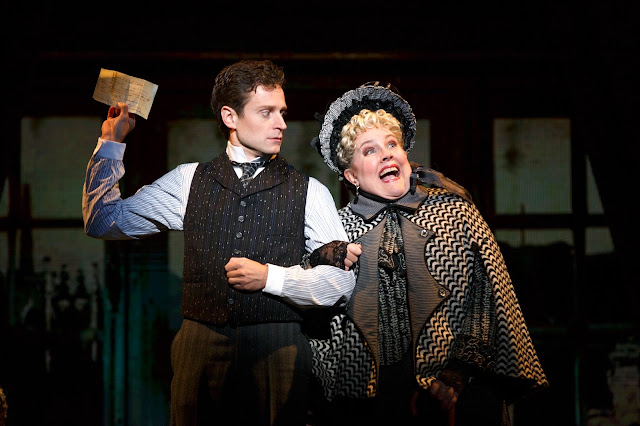 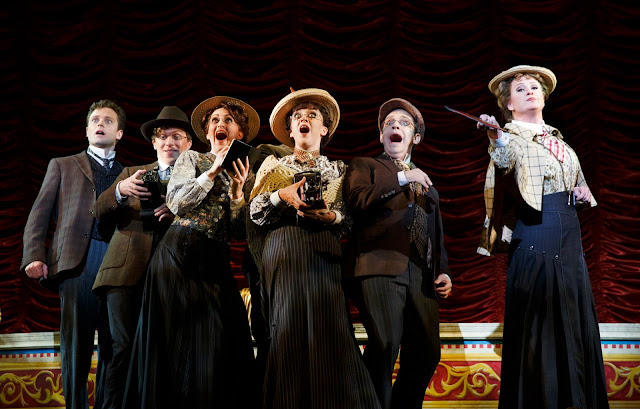 National Touring Company. The cast with Kevin Massey as Monty Navarro (left) and Megan Loomis as Tour Guide (right) in a scene from “A Gentleman’s Guide to Love & Murder.” Photo credit: Joan Marcus. 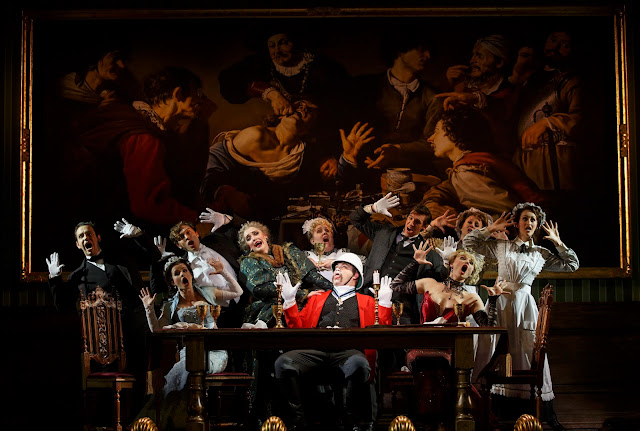 National Touring Company. The cast with John Rapson as Lord Adalbert D’Ysquith (red) in a scene from “A Gentleman’s Guide to Love & Murder.” Photo credit: Joan Marcus.
Posted by Bonnie Kenaz-Mara at 1:52 PM

Email ThisBlogThis!Share to TwitterShare to FacebookShare to Pinterest
Labels: A Gentleman's Guide to Love & Murder, Bank of America Theatre, Broadway in Chicago