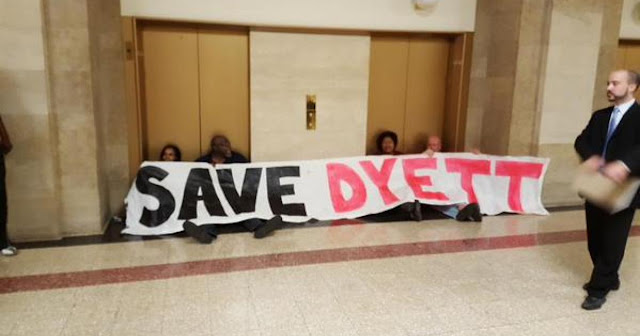 The hunger strike is being supported nationally by The Alliance to Reclaim Our School (AROS) is a national coalition of parents, teachers and community leaders representing more than 7 million people.

“Mayor Emanuel’s policies have harmed children and devastated communities,” said Keron Blair, Executive Director of AROS. “These eleven brave men and women are starving themselves to stand up for justice and the standing up for the schools our children deserve. We could not be more proud to stand with them.”
In Culmination Of A Seven Year Fight, 11 Community Leaders To Stop Eating
To Save Dyett High School

The eleven hunger strikers, who will camp out in front of the school and refuse to eat until Mayor Emanuel reverses course, include:

The Alliance to Reclaim Our Schools (AROS) is a national community/labor table of organizations of parents, students, teachers and community members who are fighting for the public schools our children deserve.