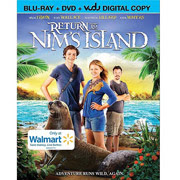 
Return to Nim’s Island, the sequel to Walden Media’s 2008 box office hit Nim’'s Island, picks up the story a few years later with 14-year-old Nim (Bindi Irwin) more determined than ever to protect her island and the animals that call it home. With ruthless resort developers and greedy wildlife poachers threatening the existence she loves, Nim realizes she and her animal pals can’t defend their home alone. To save her island, she is forced to combine forces with an outsider: Edmund, a runaway from the mainland. Only with his help does she stand a chance of stopping the villains from dismantling her world.

Return to Nim’s Island star Bindi Irwin will be doing a Live Twitter Q&A on Saturday March 9th at 6pm EST/3pm PST!  This is your chance to connect with Bindi!   She will be collecting questions to answer on Saturday so start asking away, just remember to tag your question to Bindi with #nimsislandchat!


Disclaimer:   Thanks to Walden Media & Hallmark Channel and PartnersHub.   We were given the opportunity to run this giveaway  in promotion of the release of the Return to Nim’s Island Family Adventures Blog App.   All opinions are our own.

Return to Nim'’s Island marks the debut of Walden Family Theater, presented by Walmart and P&G.  The new destination for family entertainment, exclusively on Hallmark Channel.

Return to Nim’s Island on Blu-ray & DVD will be available exclusively at Walmart Stores just 4 days after the premiere.

Posted by Bonnie Kenaz-Mara at 1:57 PM