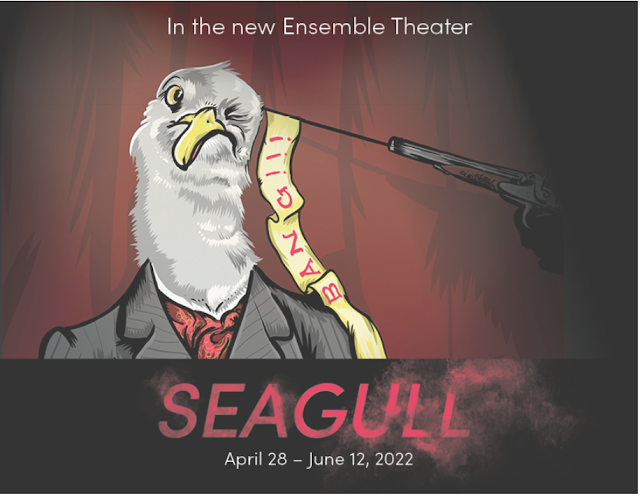 I'll be out to review on May 15th, so check back soon for my full review.

Yasen Peyankov directs the production, featuring Steppenwolf co-founder Jeff Perry and fellow ensemble members Sandra Marquez, Caroline Neff, Karen Rodriguez, Eric Simonson and Namir Smallwood, alongside Keith Kupferer, Elijah Newman, Jon Hudson Odom, Joey Slotnick and Lusia Strus. Scott Jaeck steps in for Jeff Perry for performances May 24–June 5. Three generations of Steppenwolf’s acclaimed ensemble collide in classic Chekhovian style in this play set over a long summer weekend in the Russian countryside, where guests wrestle with the eternal questions that haunt the intellectual artist class: What is Love? What is Art? When is Lunch? This historic moment in Steppenwolf history marks a new era of theater-making for the company in their new artistic home.

Seagull inaugurates the new Ensemble Theater in Honor of Helen Zell at the heart of Steppenwolf’s trailblazing new Liz and Eric Lefkofsky Arts and Education Center, designed by world-renowned architect Gordon Gill FAIA of Adrian Smith + Gordon Gill Architecture. The state-of-the-art 400-seat theater in-the-round is one of its kind in Chicago, with theater design and acoustics by Charcoalblue. Only six rows deep—with audience members never more than 20 feet from the stage—and featuring a modular staging system to vary audience capacity and experience, Charcoalblue designed the incredibly intimate Ensemble Theater from the inside out to integrate the theater into the fabric of the surrounding building. Steppenwolf’s transformed campus also includes two new full-service lobby bars designed by fc STUDIO, inc., offering additional spaces for socializing alongside the popular Front Bar.

The opening of the Ensemble Theater with a multigenerational cast stacked with Steppenwolf ensemble members is the culmination of a season-long celebration of the new Arts and Education Center. The 2022 Steppenwolf Gala on Saturday, May 14 at 6:30 p.m. at Rockwell on the River celebrates the new theater and expanded campus, offering a gourmet dinner and evening of entertainment emceed by ensemble members and Artistic Directors Glenn Davis and Audrey Francis. Gala Co-Chairs are Caroline and Keating Crown, Nora Daley and Sean Conroy, and Penny Pritzker and Bryan Traubert. Additional host committee members include GCM Grosvenor, Liz and Eric Lefkofsky, Topher and Peyton Merrill, Northern Trust, Anne and Don Phillips, and Helen Zell. For more information, visit steppenwolf.org/tickets--events/events/gala-2022 or email specialevents@steppenwolf.org.

In the new Ensemble Theater in Honor of Helen Zell

On a long summer weekend in the Russian countryside at an estate bursting at the seams with guests, three generations collide in ensemble member Yasen Peyankov’s extraordinarily funny and lyrical adaption of Anton Chekhov’s Seagull, the play that opens Steppenwolf's new in-the-round Ensemble Theater in Honor of Helen Zell. In classic Chekhovian style, a sparkling cast featuring many Steppenwolf ensemble members wrestles with the eternal questions that haunt the intellectual artist class: What is Love? What is Art? When is Lunch? Join us for this historical moment in Steppenwolf’s journey as we explore the work that inspired us, laugh at the battles that consume us and celebrate, together, all that makes us grateful for each other.

Sandra Marquez (Polina Andreevna) is a Chicago-based actor, director and educator. In 2016 she was the first Latinx artist to join the Steppenwolf Theatre Company ensemble. Steppenwolf credits include: A Doll’s House Part 2, The Roommate, The Doppelgänger, Mary Page Marlowe, The Motherfu&*er with the Hat, Sonia Flew, A Streetcar Named Desire. Other credits: Mala Hierba (Second Stage Theatre); Electricidad, The Happiest Song Plays Last, Mariela in the Desert (Goodman Theatre); Massacre, The Sins of Sor Juana, Another Part of the House (Teatro Vista); Clytemnestra in Iphigenia in Aulis, Agamemnon, and Electra (Court Theatre); Mojada & Anna in the Tropics (Victory Gardens Theater); Breakfast Lunch and Dinner (Oregon Shakespeare Festival). Marquez directed La Ruta by Isaac Gomez, marking the first all-Latina cast at Steppenwolf. More recently, she directed the critically acclaimed and sold-out world premiere of I Am Not Your Perfect Mexican Daughter also at Steppenwolf. Jeff Awards: Best Supporting Actress in A View from the Bridge (Teatro Vista). Jeff Award nominations: Best Actress in a Leading Role for 26 Miles (Teatro Vista & Rivendell Theater), Living Out (Teatro Vista). A longtime ensemble member at Teatro Vista, she served as the Associate Artistic Director alongside Artistic Director Edward Torres from 1998-2006. She is a member of the Northwestern University theater faculty where she enjoys teaching and mentoring young artists.

Caroline Neff (Nina Zarechnaya) is a Steppenwolf ensemble member. At Steppenwolf, she was last seen in Dance Nation, The Curious Incident of the Dog in the Nighttime, You Got OIder, Linda Vista (also at the Taper Forum and Second Stage Broadway), The Fundamentals, The Flick, Airline Highway (also the Broadway production at Manhattan Theatre Club), The Way West, Three Sisters, Annie Bosh is Missing and Where We’re Born. Select theatre credits include: Lettie (Jeff Award Best Actress; Victory Gardens Theater); Uncle Vanya (Goodman Theatre); A Brief History of Helen of Troy (Jeff Award for Best Actress), The Knowledge, Harper Regan, In Arabia We’d All Be Kings (Steep Theatre); The Downpour (Route 66 Theatre); Port (Griffin Theatre); 4000 Miles (Northlight Theatre) and Moonshiner (Jackalope Theatre). Regional credits include: Peerless (Yale Repertory Theatre). Film and television credits include: The Red Line, Chicago PD, Chicago Fire, Open Tables and Older Children. She can also be seen in recurring roles in the upcoming Let the Right One in, and Three Women, both on Showtime. She is a proud company member of Steep Theatre and holds her BA from Columbia College Chicago.

Karen Rodriguez (Masha) joined the Steppenwolf ensemble in 2018. She was most recently seen in the Steppenwolf for Young Adults critically acclaimed adaptation of I Am Not Your Perfect Mexican Daughter and on the mainstage in Dance Nation, La Ruta, The Doppelganger (an international farce), and The Rembrandt. Other selected Chicago credits include: The Way She Spoke (Greenhouse Theater Center), Breach (Victory Gardens Theater), The Displaced (Haven Theatre),  Hookman (Steep Theatre), Blue Skies Process (Goodman Theatre). Television credits include: The Big Leap and Chicago Fire. 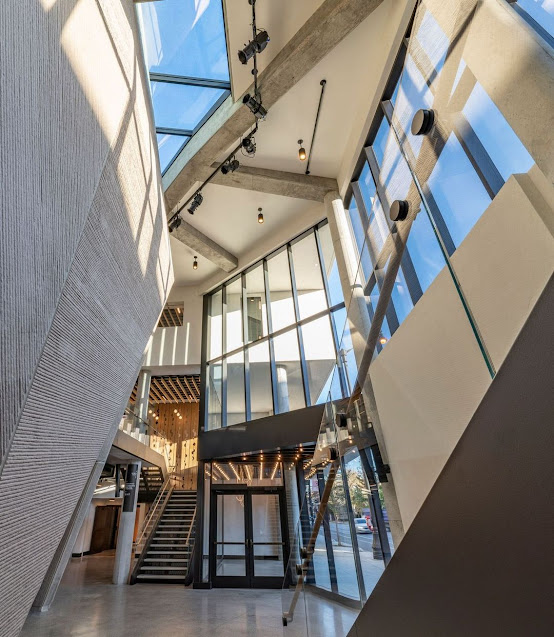 Steppenwolf Theatre Company’s trailblazing new 50,000 square foot theater building and education center, the Liz and Eric Lefkofsky Arts and Education Center, was designed by world-renowned architect Gordon Gill FAIA of Adrian Smith + Gordon Gill Architecture, with construction by Norcon. The centerpiece of the new Arts and Education Center is the new 400-seat in-the-round Ensemble Theater in Honor of Helen Zell—one of its kind in Chicago—with theater design and acoustics by Charcoalblue. The inaugural production in the Ensemble Theater will be ensemble member Yasen Peyankov’s extraordinarily funny and magical adaptation of Seagull, stacked with a cast of ensemble members (April 28–June 12, 2022).

Steppenwolf is part of the growing coalition of more than 70 Chicagoland performing arts venues and producers that have agreed upon COVID-19 vaccination and mask requirements for all audiences, artists and staff. Audience members must provide proof of vaccination in addition to wearing masks. Learn more about Steppenwolf's guidelines at steppenwolf.org/welcomeback.

Steppenwolf has worked over the past year with our operations team, public health advisors and HVAC consultants to prepare its facility to safely welcome patrons back for performances. The addition of the new Liz and Eric Lefkofsky Arts and Education Center has expanded the square footage of the lobbies to nearly twice the previous amount of space offered to guests. Two additional elevators and multiple stairways have also been added to Steppenwolf’s campus for ease of transition between seating levels. The HVAC systems have undergone upgrades to allow for increased filtration and a higher percentage of circulated fresh air across all three theaters.

Steppenwolf offers accessible services to ensure all audience members have access to our work, including American Sign Language interpretation (available for student matinees as scheduled with education staff or per public performances below), Spanish Language captions, wheelchair accessible seating and more. With questions, email access@steppenwolf.org.

Steppenwolf Theatre Company is a Chicago theater that is home to America’s ensemble. The company began performing in the mid-1970s in the basement of a Highland Park, IL church—today Steppenwolf is the nation’s premier ensemble theater with 49 members who are among the top actors, playwrights and directors in the field. Deeply rooted in its ensemble ethos, the company is committed to equity, diversity, inclusion and making the Steppenwolf experience accessible to all. Groundbreaking productions from Balm in Gilead and August: Osage County to Downstate and Pass Over—and accolades that include the National Medal of Arts and 12 Tony® Awards—have made the theatre legendary. Artistic programming includes a main stage season; a Steppenwolf for Young Adults season; LookOut, a multi-genre performance series; and the Steppenwolf NOW virtual stage. The nationally recognized work of Steppenwolf Education engages more than 20,000 participants annually in Chicagoland communities promoting compassion, encouraging curiosity and inspiring action. While firmly grounded in the Chicago community, more than 40 original Steppenwolf productions have enjoyed success nationally and internationally, including Broadway, Off-Broadway, London, Sydney, Galway and Dublin. 2021 marks the opening of Steppenwolf’s landmark Liz and Eric Lefkofsky Arts & Education Center—deepening the company’s commitment to Chicagoland teens and serving as a cultural nexus for Chicago. Glenn Davis and Audrey Francis are the Artistic Directors and E. Brooke Flanagan is Executive Director. Eric Lefkofsky is Chair of Steppenwolf’s Board of Trustees.

Steppenwolf’s Mission: Steppenwolf strives to create thrilling, courageous and provocative art in a thoughtful and inclusive environment. We succeed when we disrupt your routine with experiences that spark curiosity, empathy and joy. We invite you to join our ensemble as we navigate, together, our complex world.