FIRST LOOK:
Corey Cott as Tony and Mikaela Bennett as Maria in
Lyric Opera’s new grand-scale coproduction of
WEST SIDE STORY
May 3 – June 2, 2019 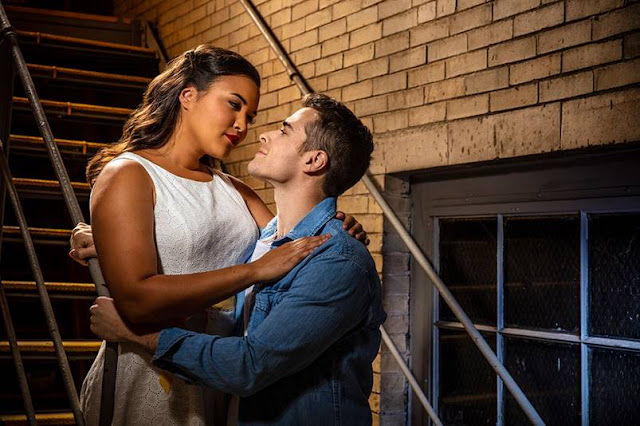 Mikaela Bennett as Maria and Corey Cott as Tony in Lyric’s West Side Story. Photo by Todd Rosenberg.


It's time to rumble on an epic scale, with a Sharks and Jets showdown, Lyric Opera style! I'll be out for the press opening, May 4th, with my son, so check back soon for our full review. We can't wait to catch this classic, ill fated love story, with an astonishing cast of nearly 100 artists and musicians. Don't miss this!

With a cast of nearly 100 artists and musicians, Lyric’s coproduction brings a new energy and scale to West Side Story, which transports the story of Romeo and Juliet to the backstreets of New York and features iconic songs “Tonight,” “America,” “I Feel Pretty,” “Maria” and more. Staged by internationally acclaimed opera and theater director Francesca Zambello, the production features members of the Lyric Opera Chorus and Orchestra conducted by James Lowe.

West Side Story is a coproduction with Houston Grand Opera and Glimmerglass Festival. Zambello, who serves as the artistic director of the Glimmerglass Festival and Washington National Opera, returns to Lyric for the first time since the premiere of her production of Show Boat (2011/12) and has also directed Lyric productions of Tristan und Isolde (2008/09) and Salome (2006/07). West Side Story features the original choreography by Jerome Robbins, recreated for Lyric by Julio Monge. Set designs are by Peter J. Davison, with costumes designed by Jessica Jahn and lighting designed by Mark McCullough. Mark Grey is sound designer and Michael Black is chorus master.

ARTIST BIOS
COREY COTT (Tony), a graduate of Carnegie Mellon School of Drama, received critical acclaim on Broadway for his performance in the Tony Award-winning musical Bandstand. He made his Broadway debut as Jack Kelly in Disney’s Newsies for two years, followed by the revival of Gigi starring opposite Vanessa Hudgens. On television, he appeared opposite Christina Ricci in the Amazon series Z: The Beginning of Everything and co-starred alongside Hattie Morahan in the BBC/PBS miniseries My Mother and Other Strangers. He can also be seen in a recurring role on The Good Fight (CBS All Access). Other credits include The Interestings (Amazon pilot), Madam Secretary, Public Morals, Law and Order: SVU, and recently completed filming a role in the new Fox pilot, Filthy Rich. A native of Chagrin Falls, Ohio, Mr. Cott previously starred in Ms. Zambello’s staging of West Side Story in Concert with the National Symphony Orchestra at the Kennedy Center, conducted by Steven Reineke. He recently made his Carnegie Hall debut singing with the New York Pops.

MIKAELA BENNETT (Maria) is a graduate of the Juilliard School and is celebrated as a singer and actress for her work on stage and in the concert hall. In 2019 she was honored with a Lincoln Center Award for Emerging Artists. On stage, she made her professional debut starring as Penelope/The Golden Apple at City Center Encores! She originated the role of Norma/Renascence in Dick Scanlan and Carmel Dean’s new musical in New York City, and at the Prototype Festival she originated the title role/Acquanetta in a new opera composed by Michael Gordon. In the concert hall she has made her debuts with some of the world’s leading orchestras, including the John Wilson Orchestra (as Maria/West Side Story, concert performance at the BBC Proms), the New York Philharmonic under Leonard Slatkin, the Philadelphia Orchestra under Yannick Nézet-Séguin, and both the San Francisco Symphony Orchestra and Los Angeles Philharmonic under Michael Tilson Thomas. She has also appeared as a soloist at the Kennedy Center and Carnegie Hall.

AMANDA CASTRO (Anita) has previously appeared in West Side Story as both Anita (Atlanta Opera, Glimmerglass Festival) and Consuelo (Lyric Opera of Kansas City, Houston Grand Opera). Castro has appeared widely in America and also abroad (London, Germany, South Africa). A California Institute of the Arts alumna, she was a principal dancer of the renowned Brooklyn-based company Urban Bush Women for four years. In the Run the Night competition at New York’s Highline Ballroom, she won in 2016 and placed second in 2017 with Soles of Duende, her all-female percussive trio. Other New York credits include a recently completed year-long creative residency with Soles of Duende at Dixon Place Theatre; assisting choreographer Nick Kenkel at BC Beat; working as a model and movement specialist in New York Fashion Week; and dancing at Radio City Music Hall for the Ellie Awards. Castro was dance captain at Geva eater (Rochester, New York) for In the Heights. Choreography credits include the American Dance Awards, several works for Urban Bush Women, and multiple set pieces for Northeast competition studios.

BRETT THIELE (Riff) has appeared in multiple Broadway productions including Escape to Margaritaville, Miss Saigon, and Spiderman: Turn Off the Dark. A native of New Orleans, Thiele has appeared off-Broadway in Clueless, The Musical at the New Group. Regionally, he has appeared as Tulsa/Gypsy at the Maltz Jupiter Theatre, The First Wives Club at the Oriental Theatre in Chicago, Follies at the Repertory Theatre of St. Louis, and as Dakin/The History Boys at the Uptown Players in Dallas. His previous West Side Story performances include Riff with the St. Petersburg Opera Company and Action at the Asolo Theatre in Florida.

ADAM SONIAK (Action, u/s Riff) comes to Lyric following the national tour of the American-premiere production of Andrew Lloyd Webber’s Love Never Dies. No stranger to West Side Story, he has played Riff at Casa Mañana and the Westchester Broadway Theatre, as well as in major cities across Europe with the international touring company. Regionally, he has appeared at Paper Mill Playhouse (The Sound of Music) Walnut Street Theatre (Saturday Night Fever), and Riverside Theatre (Hello, Dolly!). To honor this production, Soniak has made a donation to the Illinois Coalition for Immigrant and Refugee Rights.

WEST SIDE STORY
Based on a conception of JEROME ROBBINS Book by ARTHUR LAURENTS
Music by LEONARD BERNSTEIN Lyrics by STEPHEN SONDHEIM
Original production directed and choreographed by JEROME ROBBINS
This production is a coproduction of Lyric Opera of Chicago, Houston Grand Opera, and Glimmerglass Festival.