Here at ChiIL Mama and ChiIL Live Shows we're beyond excited about The Yard at Chicago Shakespeare. We've long been fans of the excellent productions CST puts on, from in house and around the world. Now with the addition of The Yard's dynamic design space, Chicago is home to one of the most flexible theaters in the world! We can't wait to take a tour and see the nine seating towers in a myriad of configurations for different productions over the coming season. 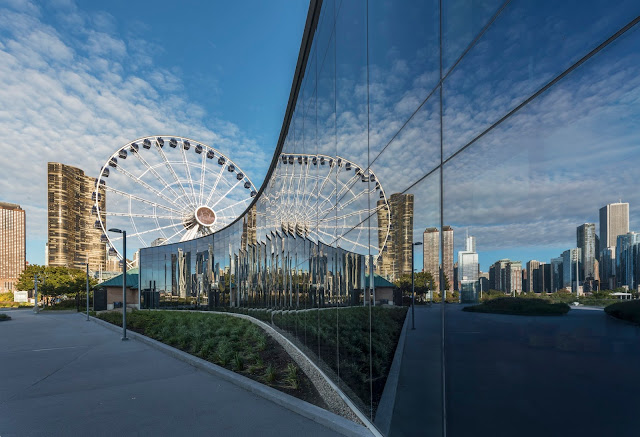 “The Yard is forward-thinking and responsive—and a fitting expression of the theater that Chicago Shakespeare has become,” said Criss Henderson, Chicago Shakespeare Executive Director. “The versatility of the space means that it is perfectly suited to the widest range of our work: from large-scale musicals and new commissioned works, to international imports and programs for young audiences, and, of course, bold imaginings of Shakespeare’s plays and the classics.” 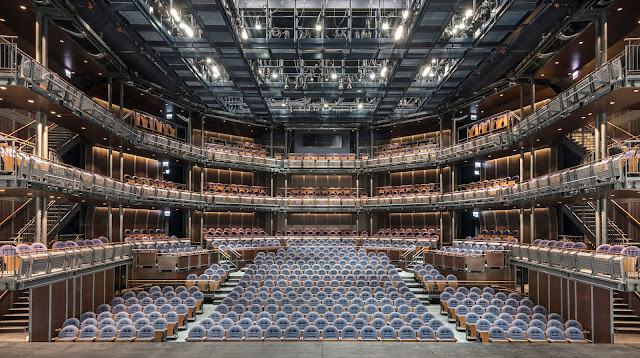 Chicago Shakespeare Theater opens an innovative, third theater space: The Yard at Chicago Shakespeare, designed by Charcoalblue and Adrian Smith + Gordon Gill Architecture. The Yard features a first in flexible design: nine audience seating towers which can be rearranged in a wide array of configurations, with audience capacities ranging from 150 to 850. Photos © James Steinkamp Photography. 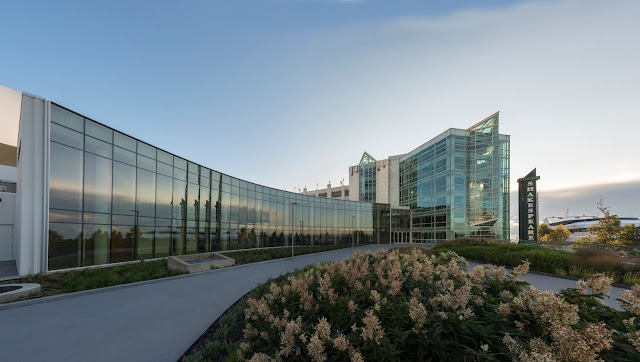 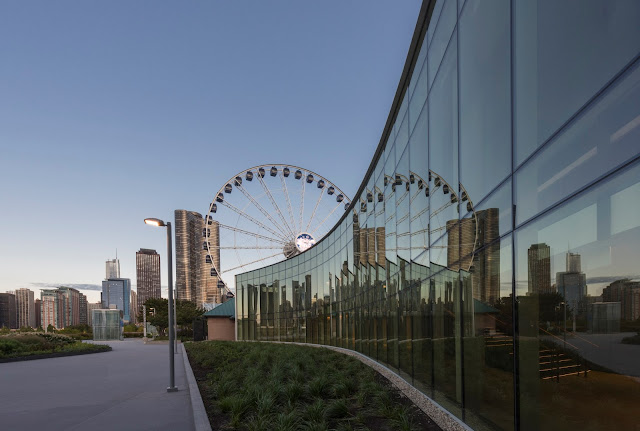 Adaptive Reuse and Sustainability
When planning the expansion, Chicago Shakespeare leadership took both an economically and environmentally sustainable approach by deciding to repurpose elements of the underutilized former Skyline Stage on Navy Pier, transforming it into a fully enclosed, indoor theater. The new, 33,000 square-foot expansion connects through a spectacular, two-level glass lobby to Chicago Shakespeare's existing building--home to the 500-seat Courtyard Theater and 200-seat theater Upstairs at Chicago Shakespeare.

Collaborating with CST Executive Director Criss Henderson, the team behind the forward-thinking design includes: top Chicago-based firm Adrian Smith + Gordon Gill Architecture (AS+GG), winner of the 2015 American Architecture award and designers of the Jeddah Tower in Saudi Arabia, soon-to-be the tallest building in the world--along with award-winning, UK-based theater consultancy firm Charcoalblue, whose projects include venues for the Royal Shakespeare Company, the National Theatre of Great Britain and St. Ann's Warehouse in Brooklyn.

Construction on The Yard began in March 2016, and was completed in a whirlwind 18 months by Bulley & Andrews. More than 200 architects, engineers and designers, and 400 construction workers contributed to the complex build, which incorporated 2,500 tons of concrete, 375 tons of steel and 15 miles of electrical conduit. Eighteen 95-foot-long micropiles were driven into the lake's bedrock below Navy Pier to support the additional weight of the new structure. The fully enclosed, year-round theater chamber was constructed below the iconic white tent with exacting engineering specifications, resulting in less than 6 inches of clearance at the narrowest point between the steel beams and tent canopy. The existing stage house and backstage support areas of the former Skyline Stage were all refurbished for reuse.

The decision to employ adaptive reuse in the architectural design reduced building costs dramatically, bringing the total cost to $35 million-far less than half of the projected estimates for entirely new construction.

AS+GG Founding Partner Gordon Gill noted, "At the foundation of my philosophy is the idea that 'Form Follows Performance' -- and nowhere is that more clear than in The Yard at Chicago Shakespeare. Its ability to adjust and adapt to the needs of the art is genuinely innovative...and we've accomplished it in a sustainable cost-conscious way, which I believe will make it a model for theaters to come."

Significantly reducing energy costs for the Theater, the two-story lobby curtain wall has been fabricated with 3,200 square feet of electrochromic SageGlass®, which adjusts the windows' level of opacity depending upon the level of sunlight (akin to transition lenses used in eyeglasses). When the glass is at its most opaque, the Theater's curved façade is virtually mirror-like -- reflecting the stunning views of the Chicago skyline and lakefront. 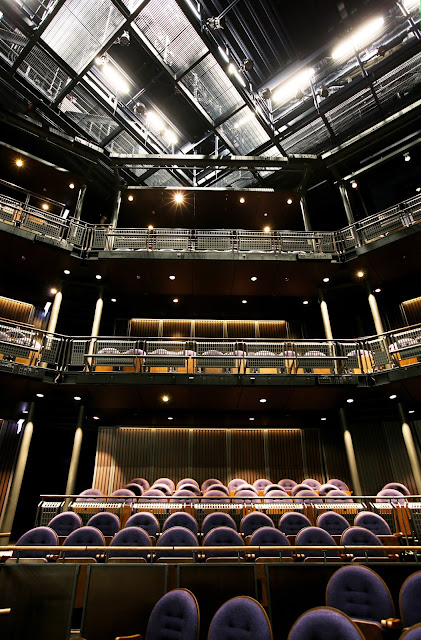 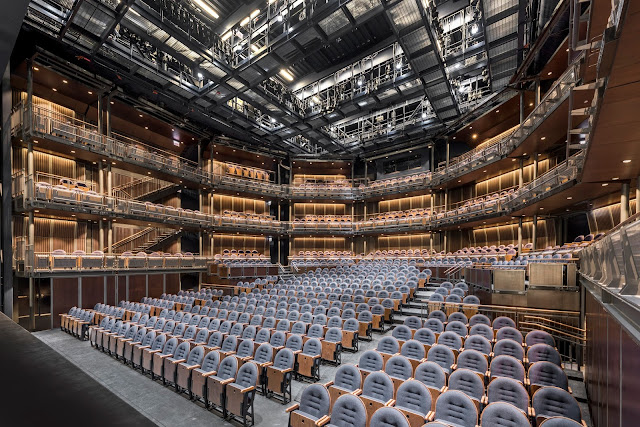 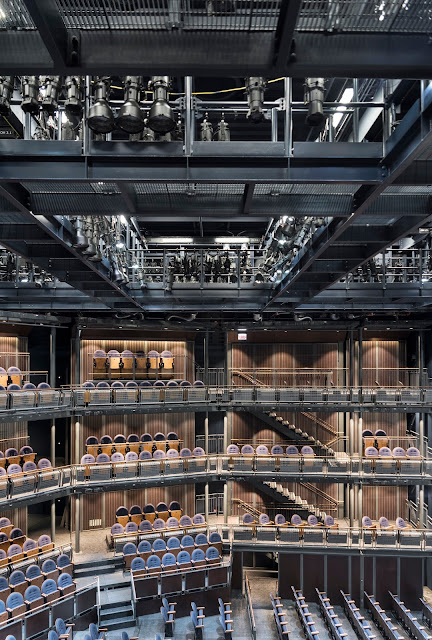 Innovation in Flexible Design
The Yard features a first in flexible design: nine audience seating towers -- each the size of a London double-decker bus, stood upright -- which can be rearranged in a wide array of configurations, with audience capacities ranging from 150 to 850. Between productions, compressed air skid technology (commonly utilized in industrial and aeronautical settings) lifts each of the 35,000-pound towers 3/8 of an inch off of the ground on a bed of air, allowing them to be moved by a three-person team.

"Nothing is more thrilling to theater-makers than flexibility," noted Artistic Director Barbara Gaines. "The adaptable platform of The Yard gives artists a theatrical 'blank slate' in which to shape their work without the physical constraints of a fixed footprint--and gives audiences an exciting, new perspective from their seats for each production."

The Yard's towers have been pioneered especially for this design under the direction of Chicago Shakespeare's Criss Henderson and Charcoalblue's Andy Hayles, and fabricated by Montreal-based ShowCanada (best known for its work with Cirque du Soleil and on large-scale theatrical events like the Olympic Opening Ceremonies). These complex structures (each measuring 12' deep x 18' wide x 37' tall) house extensive theatrical technology, and connect into a network of HVAC components and sprinkler systems to provide maximum audience comfort and safety. Additional modular main-floor seating risers and custom-built stage decking complete each configuration.

This dynamic design makes The Yard one of the most flexible theaters in the world.

"This theater is going to be unique in the world," said Andy Hayles, Managing Partner of Charcoalblue. "You can't really appreciate it unless you come again and again to experience how different this room can feel for each production. It's not just going to be what is on the stage, but where is the stage."

Chicago Mayor Rahm Emanuel stated, "The Yard, an innovative, immersive theater, will create electrifying performances and inspire all who walk through its doors," said Mayor Rahm Emanuel. "I am thrilled that Chicago Shakespeare now houses three world-renowned venues that will attract audiences from our city and cities around the world."

Highlighting the versatility of the dynamic new venue, each production in The Yard in the 2017/18 Season will feature a unique configuration that is especially suited to the needs of the artists and audiences:

James Thierrée's The Toad Knew will debut The Yard's largest proscenium configuration. The nine tri-level seating towers are configured in a horseshoe shape and-together with main floor seating-accommodate nearly 850 audience members, offering ideal sightlines for the large-scale theatrical spectacle.
For Teatro Línea de Sombra's  Amarillo from Mexico City, The Yard will be configured as an intimate, small proscenium venue seating 350-with its large stage accommodating the epic theatrical gestures of this touring production, including an expansive upstage wall for projection.

This holiday season, The Yard will be the site of the highly anticipated return of Q Brothers Christmas Carol, transformed into a cabaret configuration to give 400 audience members the opportunity to sit with beverages at tables or to watch the performance from traditional, raked theater seating. The space behind the towers will be activated with additional bars and lounge seating-perfect for the party atmosphere of the production.

This year, Short Shakespeare! A Midsummer Night's Dream will be performed for an extended run in The Yard, allowing thousands of additional students and families to engage with this education program. When configured as a thrust stage, the intimate seating arrangement surrounds the stage on three sides, with runway aisles for actor entrances and exits.

Rounding out the season in The Yard is a supernatural Macbeth, directed by Aaron Posner and Teller, with a large-scale end-stage configuration. With magic-infused theatrical effects, the placement of the audience in relation to the stage is a major consideration for the artists. With the flexibility of the Yard, the theater will be able to support the vision of the creative team for this project as never before. 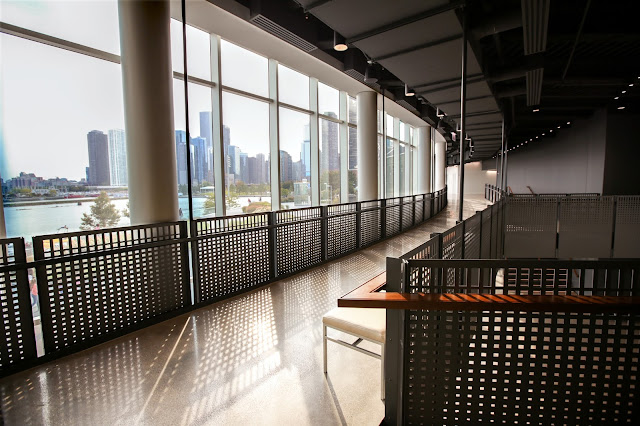 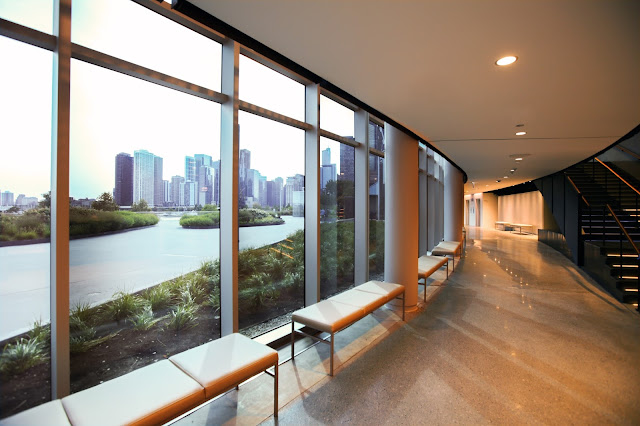 "The Theater's milestone capital and endowment campaign has reached 90% of its goal. As we now enter the public phase of this $55 million fundraising initiative, we look forward to expanding the generous community of donors who will safeguard the future of this leading Chicago cultural institution" shared Steve Solomon, Chicago Shakespeare Board of Directors Chair and Vice President of Corporate Relations of Exelon.

ABOUT CHICAGO SHAKESPEARE THEATER
A global theatrical force, Chicago Shakespeare Theater (CST) is known for vibrant productions that reflect Shakespeare's genius for storytelling, musicality of language, and empathy for the human condition. Under the leadership of Artistic Director Barbara Gaines and Executive Director Criss Henderson, Chicago Shakespeare has redefined what a great American Shakespeare theater can be, putting forward a company that delights in the unexpected and defies theatrical category. A Regional Tony Award-winning theater, CST produces acclaimed plays at its home on Navy Pier, throughout Chicago's schools and neighborhoods, and on stages around the world. In 2017, the Theater unveils a radical new stage, The Yard at Chicago Shakespeare. Together with the Jentes Family Courtyard Theater and the Thoma Theater Upstairs at Chicago Shakespeare, The Yard positions CST as the city's most versatile performing arts venue.


Chicago Shakespeare's year-round season features as many as twenty productions and 650 performances-including plays, musicals, world premieres, and visiting international tours-to engage a broad, multigenerational audience of 225,000 community members. Recognized in 2014 in a White House ceremony hosted by First Lady Michelle Obama, CST's education programs support literacy and creativity for 40,000 students each year. Each summer, 30,000 family audiences welcome the free Chicago Shakespeare in the Parks tour into their neighborhoods across the far north, west and south sides of the city. The Theater is the leading producer of international work in Chicago, and has toured its own plays across North America and abroad to Africa, Asia, Australia, Europe, and the Middle East, garnering multiple accolades, including the prestigious Laurence Olivier Awards, among others. Emblematic of its role as a global theater, during 2016 CST spearheaded the Shakespeare 400 Chicago international arts and culture festival, which engaged an estimated 1.1 million people through 863 events at 231 locations across the city-all in celebration of Shakespeare's rich, 400-year legacy.