REVIEW: Don't Miss This! The New Sincerity at Theater Wit Through April 17th

Adult Night Out
Chi, IL LIVE Shows On Our Radar:
The New Sincerity at Theater Wit

**FINAL SPECIAL OFFER!**
Reserve your tickets for any performance
with offer code "NSTREET" for $5 off EACH ticket!
(offer expires 4/5)


The New Sincerity by Alena Smith from Theater Wit on Vimeo.


Here at ChiIL Live Shows we adore this production and highly recommend it. We had a number of friends involved in the Occupy Chicago movement and when I initially read the premise of this show I couldn't see how Theater Wit could convincingly pull this off on stage. I should never have doubted. They came through in spades!

Theater Wit's stage has been beautifully and convincingly transformed into a New York worthy live/work loft space, while the protests were effectively portrayed by screens streaming news from Occupy New York, and by a steady stream of fascinating characters entering and exiting from the Occupy "battlefields.

Yes, this show is laugh out loud funny, but it's also complex and multilayered enough to leave you thinking about snatches of dialogue days later. Rose (Maura Kidwell) is well cast as the naive geek girl, smart, driven and eager to prove herself. Sadly, in her inexperience, she confuses power in one crush and a zen like aimlessness with sexiness, instead of finding someone to truly treat her decently and appreciate her gifts. Natasha (Erin Long) is also brilliant as the eternal unpaid intern whom everyone writes off. She comes across as an almost ditzy and cliche millennial, but as the play unfolds, it's apparent that under her flakey persona, she's actually quite bright, insightful and more than competent.

Nobody is quite who they seem in this show. The wild eyed, perennially unemployed Occupy idealist just may turn out to be a trust fund baby, taking a break from the Bentleys to play rebel with a cause in a tent city full of free love and fun times. Maybe some violent acts are deserved. Maybe some "activists" are not arrested for their heartfelt ideals, but for a byline and a power grab at fame. History is constantly rewritten, movements are coopted, and you can't always believe what you read or see, even if you were there. Whether the press is mainstream or under the radar, reporting is subjective and often filtered through dogma, opinions, and ulterior motives, consciously or subconsciously.

It's eerily appropriate that Benjamin (Drew Shirley) ends the show by donning a Guy Fawks mask for his black tie, big donor dinner for the Occupy movement. The iconic face has been appropriated by Anonymous, the on line hacktivist group, and pop culture in general. The mask has come to stand as an easily recognizable symbol for protest, yet the element of disguise, secrets, and lies is still present too. Don't miss this!

GET OCCUPIED WITH THEATER WIT'S
MIDWEST PREMIERE OF THE NEW SINCERITY
ALENA SMITH'S NEW COMEDY ABOUT LOVE, SEX AND PROTEST, THROUGH APRIL 17

Arguably the play of our current political moment,
Wit's Midwest premiere of Alena Smith's new play about love, sex and protest is perhaps the first drama to deal with the idealism of the Occupy Movement, and explores the personal motivations for why people pursue dissent.

Erudites among us know "New Sincerity" is an actual term used in music, aesthetics, film criticism, poetry and philosophy, generally to describe art or concepts that run against prevailing modes of postmodernist irony or cynicism. 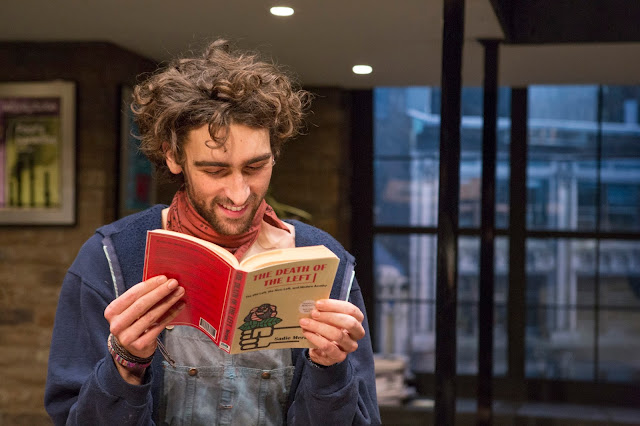 Theater Wit is excited to introduce Chicago to one of the nation's top young women playwrights with The New Sincerity, a comedy by rising dramatist Alena Smith (Tween Hobo, The Newsroom, The Affair) about love, sex and protest, and perhaps the first drama to deal with the idealism of the Occupy Movement.

Performances run through April 17. Show times are Thursday, Friday and Saturday at 8 p.m., and Sunday at  2 p.m. Tickets are $12-$36. Theater Wit is located at 1229 N. Belmont, in the heart of the new Belmont Theatre District in Chicago's Lakeview neighborhood.To purchase single tickets, a Theater Wit Membership or Flex Pass, visit TheaterWit.org or call 773.975.8150.

In The New Sincerity, Smith investigates the fine line between sincerity and self-promotion through the story of Rose, a young journalist who has to untangle a sticky quagmire of politics, ambition and love. The year is 2011, and an Occupy-style movement has sprung up near the offices of the literary journal where Rose works. She gets swept up in the movement, but can she behave honestly in a context that may only be an unending performance? Her attempt to navigate her personal life in the midst of political, social and romantic upheaval is a poignant and comic drama for a rising generation.

Her play The New Sincerity premiered in 2015 at Bay Street Theatre in Sag Harbor, New York. The New York Times called it "a splendid new play...this is comedy with a poignant edge." Her plays have been produced internationally, including The Bad Guys, which was made into an independent film. She received her MFA in Playwriting from the Yale School of Drama, and studied philosophy at Haverford College and Oxford. Her essays about writing for theater, TV, and the internet have been published in Grantland and the Los Angeles Review of Books.

About Theater Wit
Theater Wit - "a thrilling addition to Chicago's roster of theaters" (Chicago Tribune) and "a terrific place to see a show" (New City) - is now in its fifth season in its home at 1229 W. Belmont Ave. in Chicago. In 2014, Theater Wit was awarded the National Theatre Award by the American Theatre Wing for strengthening the quality, diversity and dynamism of American theater.

Founded in 2004, Theater Wit's mission is to explore contemporary issues with wit and wisdom through new works and Chicago premieres. As a production company, Theater Wit is Chicago's premier smart art theater, producing humorous, challenging and intelligent plays that speak with a vibrant and contemporary theatrical voice. Recent critical and box office hits include Bad Jews by Joshua Harmon, Mr. Burns, a post-electric play by Anne Washburn, The (curious case of the) Watson Intelligence and Seven Homeless Mammoths Wander New England by Madeleine George, Completeness and The Four of Us by Itamar Moses, and perennial holiday favorite The Santaland Diaries.

As an institution, Wit seeks to be the hub of the Chicago neighborhood theater scene, where audiences enjoy a smorgasbord of excellent productions in three, 99-seat spaces, see a parade of talented artists and mingle with audiences from all over Chicago. Theater Wit brings together Chicago's best storefront companies, including 2015-16 resident companies Stage Left, About Face, Shattered Globe and Kokandy Productions. 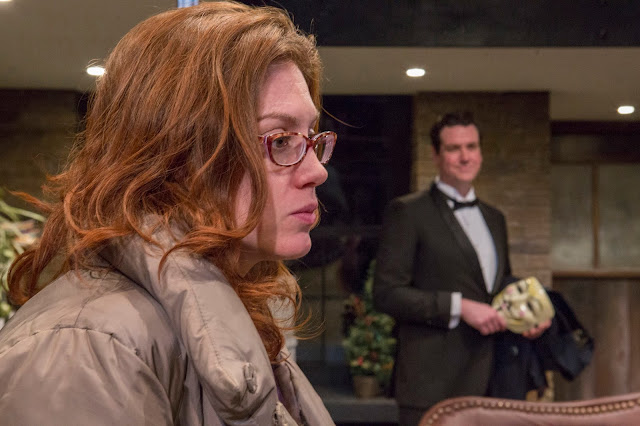 Posted by Bonnie Kenaz-Mara at 9:21 PM