SAVE THE DATES: Three Oaks Theater Festival announces its 2015 season

Many of our friends and Chicago families we know have weekend places in and around Three Oaks, Michigan. It's incredible to get away from the hustle and hassle of big city living and enjoy the lake from the flip side. Yet, small town life can be devoid of the plethora of plays we adore in Chicago. Thankfully, with the Three Oaks Theater Festival, you can have your plays and getaways too! Some of our favorite Chi town troupes will be playing all summer long. Check out this stellar lineup and book your tickets in advance.  If you don't have a weekend place in Three Oaks, there are loads of rentals in the region, and these shows make a great excuse to book a weekend getaway. 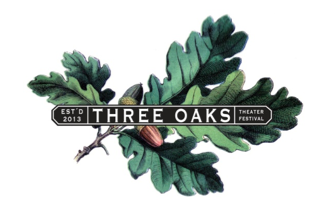 This summer’s season includes The Hypocrites’ HMS Pinafore, new work from the Q Brothers, Northlight Theatre’s Chapatti starring John Mahoney, The Bicycle Men and others to be performed in beautiful Harbor Country, MI

Co-founders John Stoops and Tim Evans proudly announce the third season of the Three Oaks Theater Festival, an annual summer event that brings limited-engagement runs of highly- acclaimed, professional productions to audiences in Harbor Country, Michigan. This season will be performed at the Acorn Theater with a staged reading to take place at the Vickers Theatre.
The 2015 Three Oaks Theater Festival will present a staged reading of Northlight Theatre’s Chapatti with John Mahoney and Penny Slusher; the family-friendly Emerald City Theatre Company’s Elephant and Piggie’s We are in a Play!; Patsy Cline – She’s Got You from Broadway diva Jenny Lee Stern; The Hypocrites’ H.M.S. Pinafore; The Q Brothers’ Q Gents; and the musical comedy The Bicycle Men.

Information and tickets are available at www.threeoaksfestival.com or call 866-811-4111.
“The third season is proving to be a charm as we’ve assembled our best schedule yet! We’re thrilled to present a summer’s worth of top notch, family-friendly theater for residents and visitors to Harbor Country,” says co-founder John Stoops.

Co-founder Tim Evans comments, "Something new this year will be spreading our performances throughout the whole season on select weekends from late June to September thus making the festival truly a summer-long event."

The 2015 Three Oaks Theater Festival is:
A Staged Reading of Northlight Theatre’s
CHAPATTI
By Christian O’Reilly
Directed by BJ Jones
Starring John Mahoney and Penny Slusher
June 27, 2015 at 8:00pm ET
Performed at Vickers Theater, 6 N. Elm St. Three Oaks, MI Ticket price: $25
Romance is a distant memory for two lonely animal-lovers living in Dublin. When forlorn Dan and his dog Chapatti cross paths with amiable Betty and her nineteen cats, an unexpected spark begins a warm and gentle story about two people re-discovering the importance of human companionship.
Chapatti first premiered at Northlight Theatre in Spring 2014 in a co-production with Galway Arts Festival, where it played that summer. Written by acclaimed Irish playwright Christian O’Reilly, the staged reading at the Three Oaks Theater Festival will feature original cast members John Mahoney and Penny Slusher with direction by Northlight Artistic Director BJ Jones.
ELEPHANT AND PIGGIE’S WE ARE IN A PLAY!
Presented by Emerald City Theatre Company
Based on the Elephant & Piggie Books by Mo Willems
Script and lyrics by Mo Willems
Music by Deborah Wicks La Puma
Directed by Morgan Ashley Madison
July 18, 2015 at 10:00am ET and 1:00pm ET
Performed at Acorn Theater, 107 Generations Dr., Three Oaks, MI Ticket price: $20
Ages: Best suited for children of all ages
Elephant Gerald is careful. Piggie just wants to play! Our favorite characters from Mo Willems' beloved Elephant and Piggie series set the stage for this vaudevillian romp of a musical, where pachyderm and swine heroically explore the importance of friendship. With the help of nutty backup singers, The Squirelles, this is an animal party that families won't want to miss!
Books from Willems’ Elephant and Piggie series regularly appear on the New York Times bestseller list, and have garnered many accolades, including two Theodore Seuss Geisel Awards and four Theodore Seuss Geisel Honors. This musical romp through the friendship of worrisome Elephant Gerald and rambunctious Piggie was developed by Willems and composer Deborah Wicks La Puma at the Kennedy Center last year and had a wildly successful run at Chicago’s Emerald City Theatre Company in Spring 2015.

PATSY CLINE – SHE’S GOT YOU
Presented by Artists Lounge Live
August 1 at 5:00pm ET and 9:00pm ET
Performed at Acorn Theater, 107 Generations Dr., Three Oaks, MI Ticket price: $30-35
She was from the wrong side of the tracks. But her music knew no bounds, reaching across genres and generations. She struggled all her life, yet managed to express her heartache with sincere empathy and rare emotional depth. She stole our hearts and sang our secrets. Celebrate country music’s greatest star, the legendary Patsy Cline in a bewitching performance from Broadway powerhouse Jenny Lee Stern (Broadway: Rocky; Off-Broadway: Forbidden Broadway; National Tour & Broadway in Chicago: Jersey Boys). You’ll fall in love all over again as Jenny Lee rekindles Patsy’s greatest hits, including Walkin’ After Midnight, I Fall to Pieces, Crazy, and many more.

H.M.S. PINAFORE
Presented by The Hypocrites
Music by Arthur Sullivan
Libretto by W.S. Gilbert
Adapted and Directed by Sean Graney
August 21 2015 at 8:00pm ET and August 22, 2015 at 4:00pm ET and 8:00pm ET Performed at Acorn Theater, 107 Generations Dr., Three Oaks, MI
Ticket price: $25
The Hypocrites playful re-imaging of Gilbert and Sullivan’s comic opera H.M.S. Pinafore, adapted and directed by Sean Graney, with new arrangements by Matt Kahler and Andra Velis Simon, features a 10 actor cast who also play instruments. The critically-acclaimed world premiere adaptation of the operetta was a hit in Chicago and recently played to sold-out houses at the Oberon in Boston.

Q GENTS
Presented by The Q Brothers
Adapted from The Two Gentlemen of Verona by William Shakespeare September 5-6, 2015, at 8:00pm ET
Performed at Acorn Theater, 107 Generations Dr., Three Oaks, MI
Ticket price: $25
This two-man, hip hop musical adaptation of Shakespeare's Two Gentlemen of Verona is brought to you by the Q Brothers, creators of Othello: The Remix. The Q Brothers (JQ and GQ) have traveled the globe with their “ad-rap-tations” of Shakespeare’s work. Laced with 20 plus characters, all played by two actors who never leave stage, this non-stop hip hop musical comedy is a theatrical and physical feat that is sure to keep audiences of all ages on the edge of their seats.

THE BICYCLE MEN
Written by Dave Lewman, Joe Liss, John Rubano, and Mark Nutter Music and Lyrics by Mark Nutter
September 25-26, 2015 at 8:00pm ET
Performed at Acorn Theater, 107 Generations Dr., Three Oaks, MI Ticket price: $25
Ages: Best suited for audiences age 16 and up
The Bicycle Men is a sublimely silly and delightfully bawdy musical comedy about a hapless American tourist who encounters the twisted inhabitants of a quaint French village after crashing his bike. The show is highly-acclaimed, including the distinction of being awarded the prize for "Excellence in Overall Production” at The New York Fringe Festival.

About the Co-Founders
John Stoops performed, directed and produced countless shows in Chicago. Soon after, he joined the cast of Boom, a European-based comedy ensemble and toured internationally. John's business experience includes many years with Chicago advertising giant Leo Burnett where he led the development of world class brands for several Fortune 500 companies. John is a graduate of the University of Wisconsin – Madison. He received a Masters of Business Administration from Northwestern University's Kellogg School of Management.

Tim Evans is the Executive Director of the award-winning Northlight Theatre in Skokie. Since his arrival in 2007, Evans has overseen the Theatre's new branding campaign, Leadership fundraising campaign, new board development, revamped arts education initiatives and a five year strategic plan. Prior to his arrival at Northlight, Tim spent a 20-plus year career at Steppenwolf Theatre where he served in management and producing positions. He created, curated and produced Steppenwolf's acclaimed TRAFFIC Series which included a partnership with Chicago Public Radio for subsequent broadcasts. Tim founded Steppenwolf Films, of which he is still a partner with Gary Sinise, Terry Kinney and Jeff Perry, to develop film and television projects. He produced the feature films Diminished Capacity with Matthew Broderick (premiered 2008 Sundance Film Festival) and The Last Rites of Joe May with Dennis Farina (premiered 2011 Tribeca Film Festival). He currently serves on the Board of Directors of the League of Chicago Theatres, previously served on the board of the Independent Film Project (IFP) and was a charter member of the Governor's Task Force for Media Development.

The Bicycle Men will arrive just in time for the annual Apple Cider Century bicycle tour of the orchards, forests and wineries in and around Three Oaks, Michigan. Since 1974, the Apple Cider Century is the Midwest's largest one-day century event with over 6,000 cyclists participating. The Bicycle Men will kick- off the weekend at the Three Oaks Theater Festival with their bicycle-themed musical.

About Three Oaks, Michigan
Three Oaks, Michigan, located about 70 miles from Chicago, has approximately 1,600 residents. Despite its size, the quaint Village is remarkably well-developed in the arts with a live performance venue, art house movie theater and galleries featuring the work of established and emerging artists. Chamberlain Path, located steps from the main street, has been turned into a sculpture garden featuring monumental sculptures by local and national artists. The town also hosts two annual art festivals; the Art Attack weekend and Art in the Park. Meanwhile, Dewey Cannon Park is home to Music in the Park, a free concert series held every Saturday during the summer. Perhaps most indicative of the town’s quirky, artistic spirit, Three Oaks is one of the few villages in the country with the official position of Village Poet Laureate.


For more information about Three Oaks Theater Festival visit www.threeoaksfestival.com
Posted by Bonnie Kenaz-Mara at 9:30 AM