We adore The Ruffians and their singular devotion to recollecting and recreating the deadly Iroquois Theater Fire of 1903. This sublimely absurd comedy of errors that resulted in a mediocre play becoming a death trap matinee, in which 600, mostly women and children, lost their lives in 15 minutes, is a tale worth telling. This is the 3rd year we've seen Burning Bluebeard and it still brings us to laughter and tears. Check out their short run at Theater Wit for 2 more weeks only!

Click here and scroll down for loads of our past coverage. 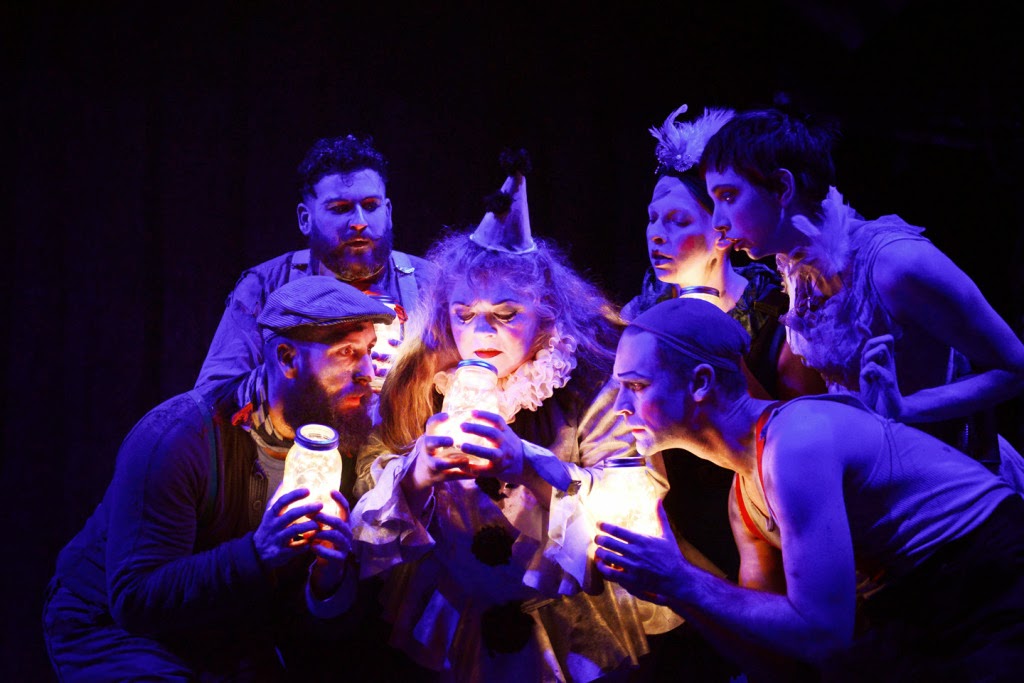 This amazing ensemble turns theatrical tragedy into a triumph of human spirit, with longing, love and tender humor. They twist themselves into small spaces, mime, slam, and soar above the audience to bring this tale to life with fire and creativity. The consummate story telling, language and imagery will stay with you long after the final bows.

The whole concept of words seeping into the floorboards and of theatres having ghosts of the faces that have shaped them makes for a passionate and powerful piece. The dead will not be forgotten. Even today, The Iroquois Theater fire stands as the deadliest single structure fire in history, and thanks to The Ruffians a new generation will know the tale.

Like the brightly colored packages that the company presents to the audience and uses to advance the storyline, this production is truly a gift. The tiny bits of beauty like the firefly jars and the tantalizingly tattered costumes, all add to the mystique that is Burning Bluebeard after the fire. It's a pleasure to see Pam Chermansky join The Ruffians in Dean Evan's former role, playing to her mime strengths and balancing the cast with a new character type. There were reinvented costumes and sets, better than ever, and quite a few new bits throughout the show. So do go back again if you've caught them in past years and do not miss this if you haven't!

We also adore the care The Ruffians have taken with every aspect of their craft. Their song choices bridge old and new through a compelling medley of modern tunes, that tie in to Bluebeard's plot with the untimely deaths of young talent, senseless violence, and creative work made all the more precious through loss. The dirge like, slow tempo version of Nirvana's Smells Like Teen Spirit set the tone beautifully as the show opened and brought tears to much of the audience before the first body bag had been breached.

Kurt Cobain, dead at 27 from suicide or possibly homicide by gun, John Lennon, shot down at age 40 after a lifetime of singing about peace, and Amy Winehouse, who died of alcohol poisoning, also at age 27, who left us the legacy of her rehab song, are the perfect voices for the Ruffian's macabre yet melancholy Burning Bluebeard.

There's something in the human spirit that loves the absurd. We embrace the "Titanic Effect", where a tempting of fate by loudly and proudly declaring a ship unsinkable or a theater fire proof, is proven wrong in a dramatically deadly display. Questionable judgement reigns supreme from the very premise on. Who thought a panto about a ruthless murderer who decapitated all his wives, featuring comedians, massive dance numbers, and an odd assortment of schtick was a good idea for a family holiday musical?!

When magical moonlight misfires, innocents do die too young, greed flourishes, and no good deed goes unpunished. Flawed humans do the best they can with limited info and disastrous consequences.

We highly recommend Burning Bluebeard. The Ruffians truly "get it" and put things into perspective with a quirky melding of humor and horror. It's fine for most ages, though a bit intense for the very young or sensitive.

Urzendowski's portrayal of 13 year old aerialist, Nellie Reed, who died in her harness flying above the blaze is particularly ballsy, brave and heart wrenching. The entire ensemble does an outstanding, ovation worthy job, and as we've come to expect from Torrence & Kays, the writing and directing is spot on.