We always dug the animated Tick episodes and raised our kids on them.   They're hilarious, well written, and have some of the best quotes ever.   So here's one of our favs about saving the earth.

The Tick is sent to the moon to revert Chairface Chippendale's attempt to write his name on it. He ends up traveling through space on Omnipotus (a parody of Galactus), the devourer of planets. (This episode was not included on the U.S. Season 2 DVD release, although it was included on the UK DVD set.)

"You're about to eat my planet.   What kind of friend is that?"
The Tick

"You can't destroy the earth.   It's where I keep all my stuff!"
The Tick 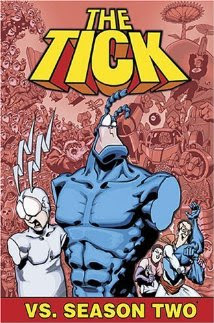 Email ThisBlogThis!Share to TwitterShare to FacebookShare to Pinterest
Labels: Alone Together, animated, Earth Day, The Tick, You can't destroy the earth. It's where I keep all my stuff