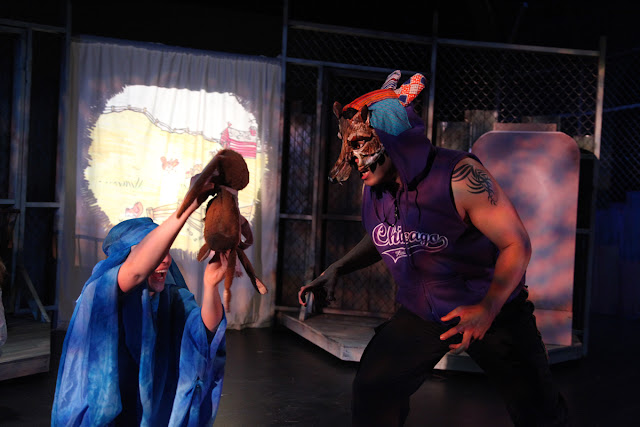 Click here to check out our past video interview with Director, Tom Arvetis, on his creative vision and that of Adventure Stage.  His interview is also part of our long running exploration on the subject of How Creatives Parent and How Parents Create. 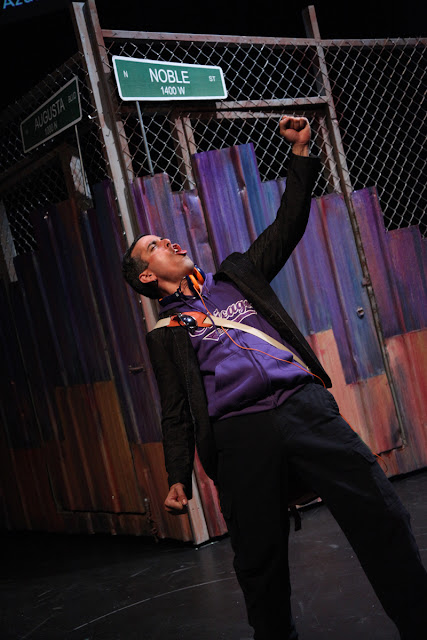 SHOW DESCRIPTION
AUGUSTA AND NOBLE tells the story of Gabi, a girl who has lived her whole life amid a vibrant Latino community in the West Town neighborhood of Chicago. But Gabi is starting high school across the city at Northside College Prep, where she is quickly exposed to new people and possibilities. As Gabi begins asking questions about her heritage, including the truth about her parents’ journey to America, she struggles to discover exactly where in this world she belongs. Told in English peppered with Spanish, this world premiere celebrates the rich history and beautiful resilience of the many immigrants who call this city home. Recommended for ages 9 and up.
In honor of our Spanish-speaking neighbors, every weekend performance of AUGUSTA AND NOBLE will include Spanish and English supertitles on a screen above the stage.

THE STORY BEHIND AUGUSTA AND NOBLE
Adventure Stage Chicago is a proud program of the 121-year-old Northwestern University Settlement House, and the title AUGUSTA AND NOBLE refers to the intersection where the Northwestern Settlement resides. The play was first conceived in Summer 2011 through a series of story circles conducted with Settlement neighbors. These stories serve as inspiration for AUGUSTA AND NOBLE, which was developed over an eighteen month period with involvement from the ASC ensemble and West Town residents.
AUGUSTA AND NOBLE is made possible through a Continuing Innovation grant from the Doris Duke Charitable Foundation. While Adventure Stage remains devoted to telling stories for families and young audiences, AUGUSTA AND NOBLE represents an important step in our organization’s evolution toward more integration of social service delivery and artistic practice.

PLAYWRIGHT/DIRECTOR BIOS
Carlos Murillo (Playwright) has had his plays produced at Theater der Stadt Aalen in Germany, Vígszínház in Budapest, Hungary, Humana Festival at Actors Theatre of Louisville, Summer Play Festival, En Garde Arts, Soho Rep, Hangar Theatre Lab, Theatre at Boston Court, Circle X, Son of Semele, Actor’s Express, Salt Lake Acting Company, City Theatre of Miami and elsewhere. His work has also been seen at The Public Theater, New York Theatre Workshop, Goodman Theatre, South Coast Rep, Portland Center Stage, Madison Rep, Sundance Institute, The Playwrights’ Center, Bay Area Playwrights Festival, Chautauqua Conservatory, Annex Theatre, UC Santa Barbara, Loyola University Museum of Art, and others. Awards include a Playwrights’ Center Jerome Fellowship, two Rockefeller MAP grants, two National Latino Playwriting Awards from Arizona Theatre Company, and the 2009 Otis Guernsey Award winner from the William Inge Theatre Festival. He has received commissions from The Goodman, Steppenwolf, Berkeley Rep, Playwrights Horizons, The Public, South Coast Rep, and En Garde Arts. Carlos has taught at the University of Iowa, the Kennedy Center, and is an Associate Professor at The Theatre School of DePaul University, where he heads the playwriting program. Carlos is also a resident playwright at Chicago Dramatists and New Dramatists. This is his first time working with Adventure Stage.
Tom Arvetis (Director) founded Adventure Stage Chicago in 2004 and is responsible for the creative vision of the company and the implementation of all programming. Tom's directing credits for Adventure Stage Chicago include Six Stories Tall by Marco Ramirez, And A Child Shall Lead by Michael Slade, Katrina: The Girl Who Wanted Her Name Back by Jason Tremblay (world premiere), The Blue House by José Cruz González (world premiere), and A Woman Called Truth by Sandra Fenichel Asher. Tom also directed a reading of Katrina: The Girl Who Wanted Her Name Back as part of the 2008 New Visions/New Voices Festival at the John F. Kennedy Center for Performing Arts. Other directing credits include 500 Clown Trapped (500 Clown tour), Dragon/Sky by Elizabeth Wong (Silk Road Theatre Project), The Search for Odysseus by Charles Way (The Simple Theatre) and The City Wears a Slouch Hat by Kenneth Patchen  (Wanderlust Productions). Playwriting credits for Adventure Stage include Walk Two Moons (honorable mention in Chicago Theatre Beat's Best Shows of 2011) and I Dream in Blues (dubbed "the sleeper hit of the season" by the Chicago Tribune). Tom was an Ann Shaw Fellow with TYA/USA in 2009 and a finalist for a 2010 Chicago Community Trust Fellowship. He is a board member with the American Alliance for Theatre and Education and a graduate of Northwestern University. 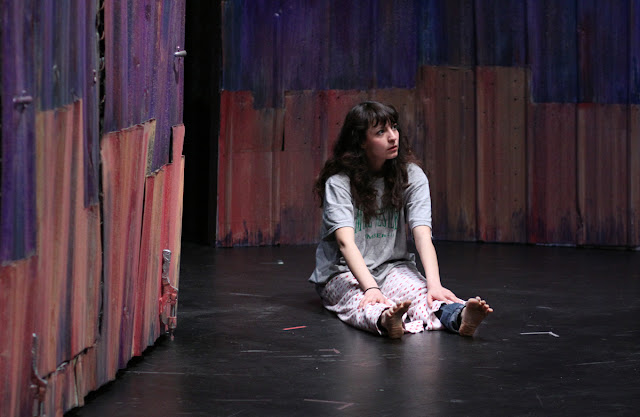 ABOUT ADVENTURE STAGE
Adventure Stage Chicago creates dynamic and transformative theatre for young audiences that activates the imagination, inspires dialogue and strengthens community among families, educators and artists. We strive to become Chicago's premier destination for theatrical productions and programming designed for young people and the adults in their lives; we aim to be leaders in theatre education through professional development workshops, residencies and resources that offer innovative ways to infuse theatre into the classroom; and we seek to cultivate and create challenging new work as well as produce celebrated stories. This is Adventure Stage's ninth season.

Adventure Stage Chicago is a program of Northwestern University Settlement House, the oldest continually operating settlement house in Chicago. Throughout its 121-year history, the Settlement has remained committed to providing resources that empower neighbors to overcome the obstacles of poverty. Adventure Stage extends this mission by presenting Chicago's young audiences, educators and families with an affordable artistic experience rooted in performance. Last season, Adventure Stage served over 7,000 students from 85 schools throughout the Chicagoland area and over 2,600 audience members for our weekend performances.

Each Adventure Stage Chicago production presents weekday matinees primarily for school groups, as well as weekend performances for the general public. Every performance includes a post-show audience talkback with the cast. Out of respect for our actors and audience members, children under age 5 are not permitted in the theatre during a performance.
All shows are performed at Vittum Theater, 1012 N. Noble St., in the heart of Chicago’s West Town neighborhood. Street parking is available, and the theater is close to the Noble St. stop on the #56 Milwaukee bus line and the Division stop on the CTA Blue Line. The theater is wheelchair accessible.

Posted by Bonnie Kenaz-Mara at 7:00 AM