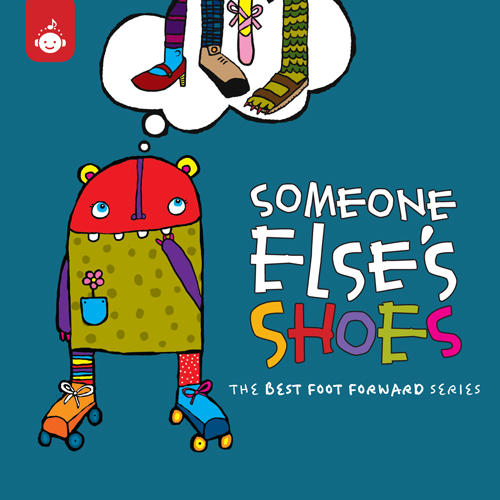 As if the concept of an esteem and compassion building CD isn't cool enough, this one rocks a colorful, funky monster cover as well.   What's not to love.

We're still waiting for our review copy, to give you our first hand report on the actual tunes, but in the meantime, we can say this CD's got some big shoes to fill, being third in the "Best Foot Forward" series.   This baby's got award winning big sibs and some powerful talent on the creative end of things.  Some of today's most gifted kids' musicians, including two-time GRAMMY®winners Cathy Fink & Marcy Marxer, four-time Emmy® winning composer/performer Jamie Broza, and Parents' Choice® and NAPPA winner Swingset Mamas all had a hand in "Someone Else's Shoes.   We'll keep you posted when we get a chance to check it out.

“Any album that encourages children to be wise, fair, and generous hearted is a welcomed addition, and U R SOME 1 does so with style, high production values and quality music that respects the intelligence and good musical taste of bothchildren and their parents.”   –2012 Parents' Choice® Award review of Recess Music’s U R SOME 1

“These 15 songs are perfect to use when starting discussions about bullies.  They promote self-esteem and polite actions, often offering positive and constructive choices to deal with the problem … a first choice for parents and educators to use when dealing with the issue of bullies and bullying.” – School Library Journal Starred Review of Recess Music’s Big Bully
Recess Music, a company dedicated to helping kids value a world that is wise, fair, and generous hearted, looks forward to the July 31 release of Someone Else’s Shoes, the third in its “Best Foot Forward”series of CDs.  Other titles in the “Best Foot Forward” series include Recess Music’s Big Bully and U R SOME 1.

All the songs on Someone Else's Shoes highlight empathy as a key ingredient for living in harmony with others.  The album features 15 tracks that showcase contributions by a sampling of some of today's most gifted kids' musicians, including two-time GRAMMY®winners Cathy Fink & Marcy Marxer, four-time Emmy® winning composer/performer Jamie Broza, and Parents' Choice® and NAPPA winner Swingset Mamas.

Someone Else’s Shoes opens with a feel-good beat and terrific vocals by Swingset Mamas on “Take A Walk In Someone Else’s Shoes.” Compelling rhythms also underscore important messages about respect, appreciation, and  empathy on The Uncle Brothers’ “Team Work” and Troubadour’s “You Hurt My Feelings.”  Other album highlights include the Appalachian folk sounds of “Give A Little Love Away” by Cathy Fink & Marcy Marxer,  Cliff Tetle’s retro vocal stylings on “Everyone Can See A Different Me,” and Jamie Broza’s exceptionally sweet ballad, “Be Nice To Old People.” Kids are sure to enjoy the rhymes on The Hill Brothers’ “There’s No Place For Bullies In Our School,” Jamie Barnett’s guitar picking on “Being With You,” the hand-clapping, happy beat underpinning The Happy Crowd’s “Say Something Nice About Someone,” the sheer musical variety within Jim Papoulis’ “Feel The World Dancing,” and Cosima’s “What A Difference,” featuring blues harp and vocals that have more than a hint of Emmylou Harris.  Rounding out Someone Else’s Shoes are offerings from Kelsey Friday & The Rest of the Week, Mike Soloway, Dan Dan Doodlebug, and Mr. KimWebster.

Recess Music’s “Best Foot Forward” series could be thought of as the musical component to a hip, up-to-date, and entirely relevant “course in manners” that reinforces a profound subtext, which points to how to survive life together and encourages kids to conduct their lives on an elevated plane.  Almost all children really want to have friends and be good playmates, but to achieve these objectives they must learn key social structures and conventions, such as how to say, “I know how you feel” or how to live by the rule of “no put-downs” toward others. Recess Music’s founder/producer Nancy Doan explains that she decided to focus on social empathy with Someone Else’s Shoes because, “When children learn to ‘walk in someone else’s shoes,’ they become better people, more understanding, more helpful to those who are in distress, and better able to celebrate other people’s triumphs, as well as their own.”  Nancy hopes that the Recess Music “Best Foot Forward” trilogy of Big Bully, U R SOME 1, and Someone Else’s Shoes will help to encourage discussion among parents, children, and educators about caring, understanding, social justice, and global peace, as well as the particular challenges caused by the unfortunate presence of intimidation and bullying behavior on our social landscape.

Recess Music’s Wild Child was featured in USA Today as one of kids’ music superstar Laurie Berkner’s  “Eight Greats for 2011.”

Big Bully was also honored by WXPN’s Kathy O’Connell in MetroKids magazine as one of the “Top Ten Family CDs of 2011” and was one of only six albums included in a DailyCandy Kids “Best Kids Music of 2011” feature, which praised Big Bully as “uplifting folk-pop performed by an all-star cast.”

Someone Else's Shoes will be available online at www.recessmusic.com, amazon.com and its international affiliates, iTunes, and brick and mortar retailers throughout the U.S.