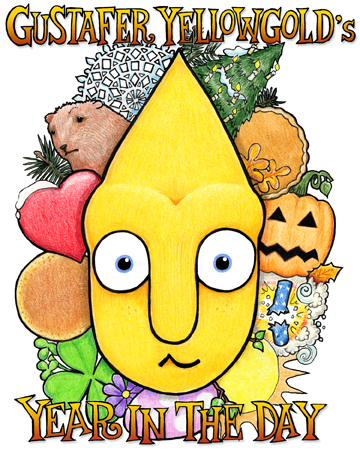 One of our all time favorites in the kindie music scene is back!   Gustafer Yellowgold, alien from the sun, returns with Year in the Day, a romp through the seasons and holidays.   Year in the Day is laugh out loud, absurdest funny, endearing and catchy.   Morgan Taylor has created what's sure to be a holiday classic, year round.   He's done it again, with his hit making wit and catchy riffs.

There are an overabundance of animated Christmas specials, and the market's even become flooded with Halloween, Easter and Valentine specials.   But this one's truly special.    Year in the Day is unique in that it covers all the simple joys and childlike wonder and excitement of everything from dying eggs, and watching fireworks, to celebrating Midsummer, werewolves and shadows!

Taylor's lyrics are quirky, irreverent and insightful, with lines like "My mind is addled by how my shadow knows I'm going out in the sunshine."   Pancake Smackdown is our ultimate fav.  It's just plain silly fun, where animals get blindsided by flying shaped pancakes.   "Nobody's ready for a pancake smackdown."   Owls are unseated and tummies are left rumbling for pancakes shaped like floating Gustafer heads.   Highly recommended for ages 4 and up and up and up.   My 11 year old son and I watched this one together and both adored it!

This release again comes in a sweet set that includes a DVD with animation to all the songs, and a CD, for those audio only occasions.  Here's a recap of the reviews and official release details below.

GUSTAFER YELLOWGOLD’S YEAR IN THE DAYAn Out-of-this-Stratosphere Experience!  Now out on DVDStarring That Little Guy from the Sun, Gustafer Yellowgold