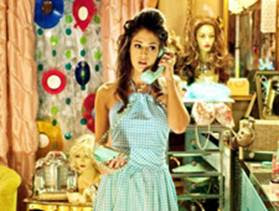 WHAT: will attend the Opening Night of the 4th Chicago International Movies & Music Festival, featuring the Chicago Premiere of their film, Queens of Country…

MORE: Also in attendance are directors Ryan Page and Christopher Pomerenke, and producer Chris Topper McDaniel. Queens of Country stars Lizzy Caplan as the prettiest girl in a small Arizona town, obsessed with old time country stars, who finds a lost iPod filled with songs that speak to her sensitive heart. Jolene Gillis is convinced the owner is her soul mate and she is thrust into a sexy, heartwarming and hilarious adventure of mistaken identities, ATVs, line dancing competitions, kidnappers, time machines and doppelgangers.

Queens of Country is among the 50+ films from over 20 countries that will be screened at the 4th Chicago International Movies & Music Festival taking place throughout Wicker Park and Logan Square through Sunday, April 15. For more information, visit www.cimmfest.org.
Posted by Bonnie Kenaz-Mara at 2:11 PM