Q Brothers Christmas Carol is Back at Chicago Shakespeare Theater Through December 23, 2021

Q BROTHERS & Chi Shakes bring all the joys to The Yard!

Chicago Shakespeare Artists and Audiences come together for the holiday season 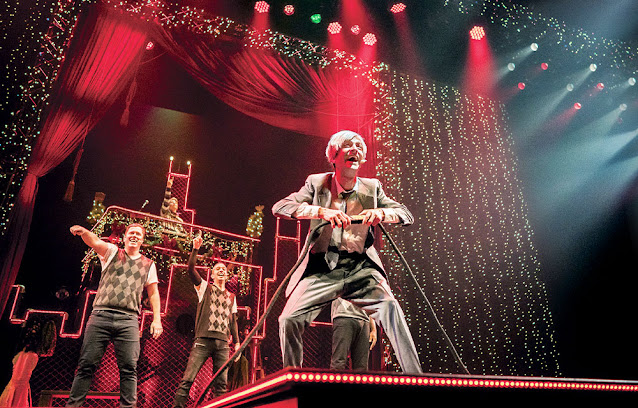 This is one of our all time top favorites in the Christmas genre. Chicago's own world renowned Q Brothers are truly a treat to see in action. We highly recommend Q BROTHERS CHRISTMAS CAROL and we adore The Yard, Chi Shakes' newest space. This show has multigenerational appeal and may well be one of the funniest holiday shows out there. We've caught every year this show has been performed since they workshopped the first version of this show back around 2012 or 13 and it's become a beloved family tradition of ours. Don't miss this!

Chicago Shakespeare Theater is once again the ultimate destination for the holiday season. The 80-minute hip hop holiday hit Q Brothers Christmas Carol, created by Chicago sensations the Q Brothers Collective (GQ, JQ, Jax, and Pos) and developed with Creative Producer Rick Boynton, is back in a limited engagement in The Yard at Chicago Shakespeare, December 7-23, 2021. The Theater will again host the popular virtual Holiday Artisan Market, December 2-5, 2021, in support of local theatermakers and community artists. Nearly 20 Chicago-area artisans will showcase more than 250 handcrafted wares in an online pop-up shop—perfect for holiday gift-giving. One hundred percent of proceeds will directly benefit the artisans.

The wildly entertaining Q Brothers Christmas Carol remixes the Charles Dickens classic, mashing up musical styles ranging from reggae and dancehall music, to dubstep and epic rock ballads. Fully decked out in the holiday spirit with stage-side cocktail tables and theater seating, the Theater is strewn with more than two miles of twinkling lights as the Ghosts of hip hop Past, Present, and Future lead Scrooge on a journey of rhythm, rhyme, and redemption.

The internationally acclaimed Q Brothers Collective fuses hip hop and theater—adapting classic stories with a wholly original style of performance that has amassed a cult following of fans in Chicago and beyond. The Q Brothers Collective pioneered the concept of "ad-rap-tation" with their Off-Broadway hit The Bomb-itty of Errors. Their award-winning collaborations with Chicago Shakespeare Theater Creative Producer Rick Boynton include Othello: The Remix—which premiered at Shakespeare’s Globe and toured to sold-out houses in London, Australia, South Korea, the United Arab Emirates, and Off Broadway—and Funk It Up About Nothin’, which garnered the Jeff Award for Outstanding Ensemble and the Dress Circle Award for Best Musical Production at the Edinburgh Festival Fringe.

A program that provides spoken narration of the play’s key visual elements for patrons who are blind or have low vision.

Open-captioned performance – Wednesday, December 15, 2021, at 7:00 p.m.A text display of the words and sounds heard during a play, synced live with the action onstage.

Run time is 80 minutes (no intermission). Single tickets ($38–$56) are on sale now with special discounts available for groups of 10 or more. For more information, visit chicagoshakes.com/qchristmas or engage on social at #QChristmas.

Back by popular demand, Chicago Shakespeare’s Holiday Artisan Market will feature more than 250 one-of-a-kind goods from nearly twenty local artists. All of the participating artisans are members of the creative sector—including onstage performers, backstage technicians, designers, and community partners from the Theater’s annual Chicago Shakespeare in the Parks program. From jewelry and ceramics to knitwork and more, the virtual Holiday Artisan Market is not only a one-stop-shop for bespoke and beautifully made gifts, but also celebration of the talent and resilience of our city’s creative community.

Taí Ramírez, a youth musician with Segundo Ruiz Belvis Cultural Center who appeared in Chicago Shakespeare in the Parks DREAM in 2021, with her whimsical jewelry creations.

Actor Nick Harazin who has appeared in in six Chicago Shakespeare productions, sharing his woodworking skills with unique wooden jewelry and furniture pieces.

Three-time Chicago Shakespeare in the Parks Green Show performer Noelle Klyce and cozy items from her crochet line Hook Me Up, Design Co.

Chicago Lighting Designer Travis Shupe and his hand-thrown pottery creations, which are both functional and beautiful.

The pop-up shop will be live December 2-5, 2021 at chicagoshakes.com/market with one hundred percent of proceeds going directly to the artisans.

A Regional Tony Award recipient, Chicago Shakespeare Theater produces a year-round season—featuring plays, musicals, world premieres, family productions, and theatrical presentations from around the globe—alongside nationally recognized education programming, each year serving tens of thousands of students, teachers, and lifelong learners. Founded in 1986, the Theater’s onstage work has expanded to as many as twenty productions and 650 performances annually. Dedicated to welcoming the next generation of theatergoers, one in four audience members is under the age of eighteen. As a nonprofit organization, Chicago Shakespeare works to embrace diversity, prioritize radical inclusion, provide equitable opportunities, and offer an accessible experience for all. On the Theater’s three stages at its home on Navy Pier, in classrooms and neighborhoods across the city, and in venues around the world, Chicago Shakespeare is a multifaceted cultural hub—inviting audiences, artists, and community members to share powerful stories that connect and inspire us. chicagoshakes.com