HERSHEL AND THE HANUKKAH GOBLINS 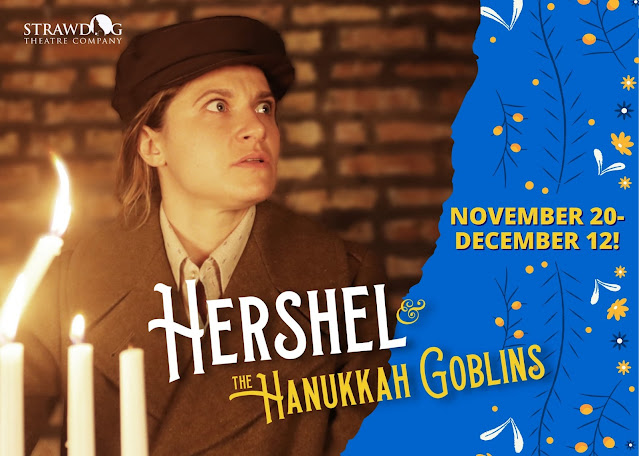 Based on the Book by Eric Kimmel

Music and Lyrics by Jacob Combs

Strawdog Theatre Company is pleased to welcome back live audiences this winter with its annual holiday hit Hershel and the Hanukkah Goblins, playing November 20 – December 12, 2021 at Rivendell Theatre, 5779 N. Ridge Ave. in Chicago. Returning for its fourth consecutive year, Hershel is based on the award-winning book by Eric Kimmel, adapted by ensemble member Michael Dailey*, with music and lyrics by Jacob Combs, direction by Hannah Todd and music direction by Ricky Harris. Tickets are free and are available at www.strawdog.org while supplies last.

A traveling troupe of actors comes to town to find no one celebrating Hanukkah. They must put on a show to save the holiday! Will they bring back the spirit of Hanukkah to the town? Will Hershel of Ostropol outsmart the goblins who haunt the old synagogue? In this adaptation of the Caldecott Honor-winning book, the story comes to life with music, puppets and a little bit of magic for families of all ages to enjoy.

Performance schedule: Saturdays and Sunday at 1 pm and 4 pm. Please note: there will be an added understudy performance on Friday, December 10 at 7:30 pm.

Eric Kimmel (Book) is the author of over 130 books for children, including Anansi and the Moss-Covered Rock and the classic Hanukkah tale, Hershel and the Hanukkah Goblins. He is a five-time winner of the National Jewish Book Award and the Sydney Taylor Award for Lifetime Achievement.

Michael Dailey (Adapter) has been a Strawdog company member since 1997. He has appeared as an actor in 24 Strawdog productions. Writing credits include three radio plays presented as part of Radio Theatre 7, co-writer on the late-night series The Adventures of Picklebot and Lawfer and script editor for Strawdog’s productions of 1001 Afternoons in Chicago, Julius Caesar and Measure for Measure.

Jacob Combs (Music and Lyrics) is a writer, composer and director based in Los Angeles. Jacob wrote the music and lyrics for Hershel and the Hanukkah Goblins (based on the beloved children’s book by Eric Kimmel), which has been produced annually since 2018 by Chicago’s Strawdog Theatre. Previous theater projects include Selling Out (Strawdog Theatre), Legends & Lore (New York Theatre Barn, Musical Theatre Workshop) and Palin! The Musical. A lifelong film nerd, Jacob recently worked in the writers' rooms of two top-secret projects at Pixar, and wrote several episodes of the Disney+ documentary series Inside Pixar. Jacob also wrote the short film Messrs., which is beginning its festival run, and his first short film as writer/director, Without, showed at several festivals in 2019 and 2020.

Ricky Harris (Music Director) is a composer, performer and music director throughout the city. He is also a seasoned teaching artist in Chicago, having taught for many years with Raven Theatre, PlayMakers Laboratory and The Beverly Arts Center Chicago, to name a few. He is currently starting in Porchlight Music Theatre's production of Pump Boys & Dinettes.

Strawdog Theatre Company is supported in part by The MacArthur Fund for Arts & Culture at the Richard H. Driehaus Foundation, the Gaylord and Dorothy Donnelley Foundation and the Illinois Arts Council Agency.