REVIEW: World Premiere of We Found A Hat at Lifeline Theatre Through Sunday, Feb. 17, 2019

Lifeline Theatre
KidSeries Presents World Premiere of
We Found A Hat,
Musical Adaptation of the Book by Jon Klassen

**This production is recommended for children ages five and up (children under two not permitted), and runs approximately one hour with no intermission.** 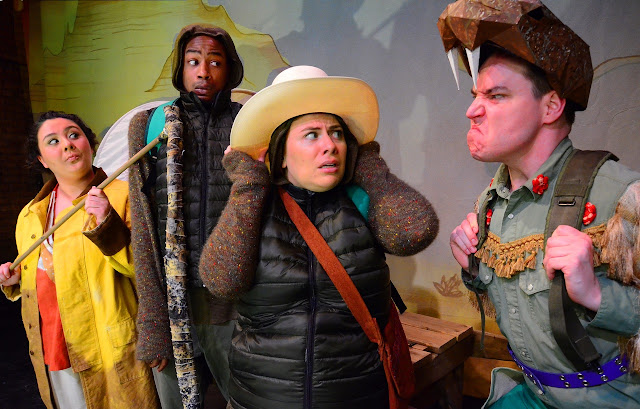 L to R: Gabriella Fernandez as Sun, Terry Bell as Kai, Amanda Roeder as Sizi, and Scott Sawa as Snake. All Production Photos by Suzanne Plunkett.

"It was a great show... the first time I haven't had to take my
4 year old out of the theatre
*and* I caught my 10 year old having a good time too!"
DisruptiveMama.com

Lifeline Theatre’s production of We Found A Hat was the most pleasant family theatre experience I’ve had in the last year. Specifically, it’s the first production my four-year-old hasn’t had to leave early, yet my older kids had a blast as well.

The universal appeal was in the cleverness of the production and also in the fact that it’s a theme anyone can relate to: loved ones driven apart by desire and jealously. In this case two best-friend tortoises have their friendship challenged when, as they migrate through the desert, they come upon a hat that instills confidence and looks great on each of them. 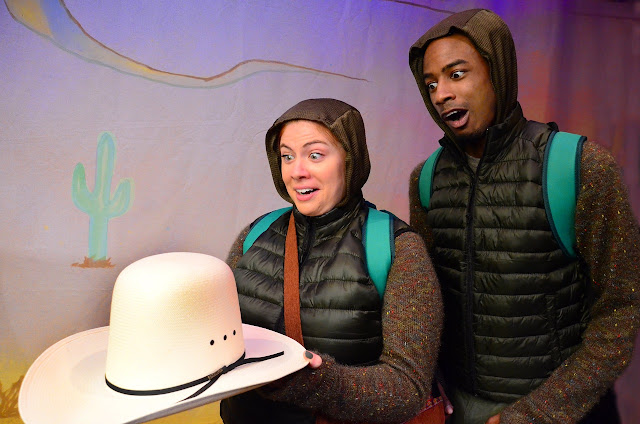 L to R: Amanda Roeder as Sizi, and Terry Bell as Kai

When I say the production was clever, I mean that we bought into the story exactly because the reality of being a bunch of audience members nearly head-to-head with a small group of actors on a stage the size of my living room with little kids occasionally making their loud contributions—well, they embraced all of that and made it part of the story.

For example, the actors made a show of getting the set ready while people were settling in their seats. This was a nice pre-show to get us interested in what was to come and entertain little ones who are not known for sitting in a seat and staring at nothing—even for five minutes.

Inventive costumes (e.g. the fringe on a cowboy’s jacket and chaps standing in for cactus prickles and a sun/moon costume that enables one actor to quickly shift between embodying each of the celestial objects—oh, and such a cool snake costume/puppet!) and use of props and actor’s bodies allowed us to delve into a vivid world of friendship being tested in the dramatically changing elements and landscape of a long desert journey. 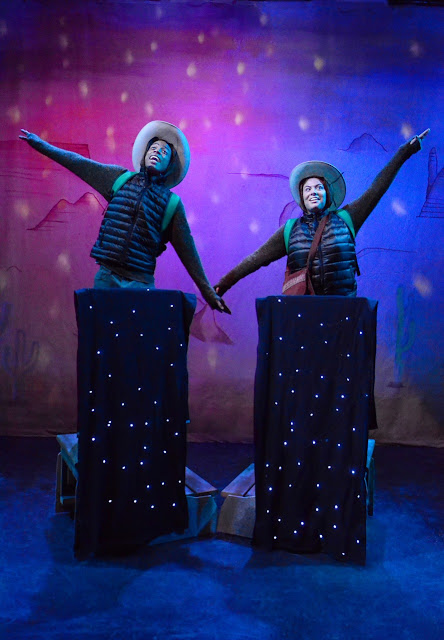 L to R: Terry Bell as Kai, and Amanda Roeder as Sizi

Some of our favorite scenes were the cactus gauntlet, a really cool dream sequence, and a dangerous storm (it was just scary enough—my 4-year-old was more afraid of the hand dryer in the bathroom).

The actors threw themselves wholeheartedly into this ecosystem of inventiveness. Through the turtles (played by Terry Bell and Amanda Roeder), kids got to see the struggle of being the big or little one, of being labeled as creative or practical when your heart wants to explore all the possibilities of who you are.

Gabriella Fernandez played Sun and Moon against Scott Sawa’s Cactus, and the two did a skilled and joyful job of embodying multiple elements and acting as a Greek chorus to give us some context on the tortoise’s friendship.

They also taught us a bit about migration, water in the desert, and the difference between turtles and tortoises. 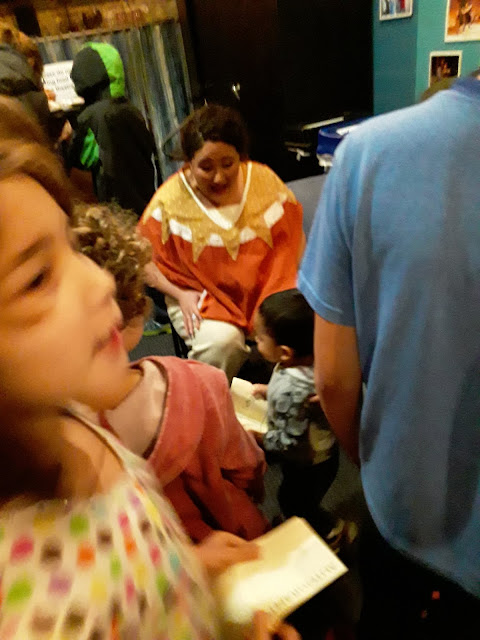 Gabriella Fernandez: Sun/Moon signs programs for kids in the lobby after the show
Photos by Kimberly Robb Baker 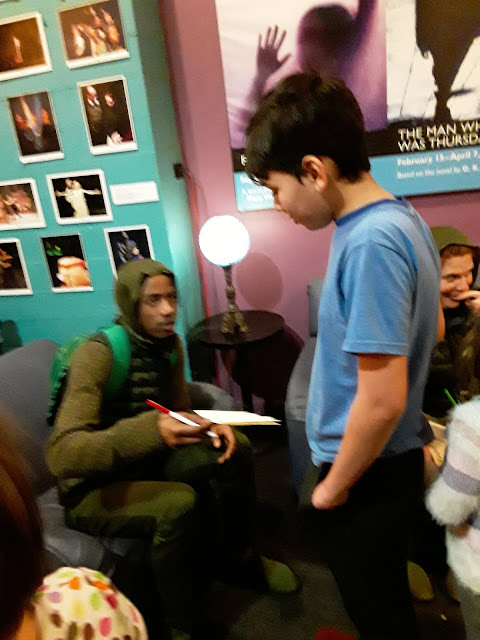 Your older children might groan before and after the show that it’s for little kids, but my 10-going-on-30-year-old caught my eye several times as we shared embedded jokes meant for the older members of the audience, and he got in line to have his program signed after the show. 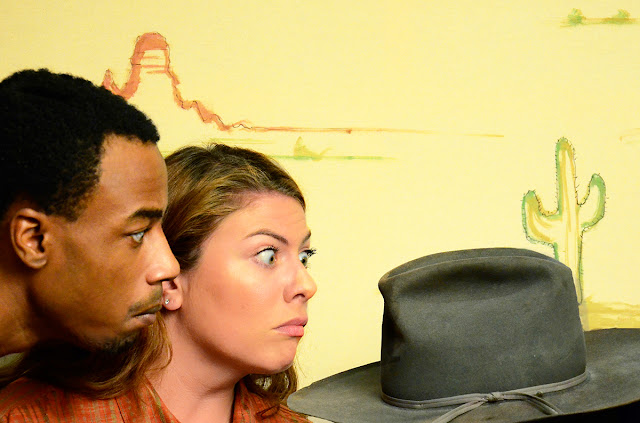 When my teens were tots, we were annual Lifeline Theatre KidSeries season subscribers. We've adored their amazing, original book based adaptations for decades. Their production values are excellent and they're one of our favorites for introducing young children to their first live theatre offerings. They truly are a lifeline for families, bringing stellar stories to life on stage, and often fostering a lifelong love of theatre arts.

Deep in the desert, two tortoises work together to overcome all obstacles the harsh landscape throws their way. Sizi and Kai are the best of pals and nothing ever comes between them... until one day they find a hat. They both look great in the hat. But they can’t both have the hat. A friendship is put to the test as the tortoises must find a way through their thorniest challenge yet. Explore the question of what we give up to support the ones we love in this adaptation of the 2016 book by Jon Klassen.

Performances with Touch Tour and Audio Description on January 26,
Open Captioning on January 27,
Autism/Sensory-Friendly Performance on February 3,
and Stories Come Alive! Hour Workshops Every Saturday and Sunday During the Run

Accessible Performances: The Saturday, Jan. 26, 11 a.m. performance will feature a pre-show touch tour of the set at 10 a.m. and live audio description for patrons who are blind or have low vision. The Sunday, Jan. 27, 11 a.m. and 1 p.m. performances will feature open captioning for patrons who are deaf or hard-of-hearing. And there will be an added autism/sensory-friendly performance on Sunday, Feb. 3 at 3 p.m. for patrons with social and/or cognitive disabilities. For more information about Lifeline’s accessibility services, please contact Accessibility Coordinator Erica Foster at 773.761.4477 x703 or at access@lifelinetheatre.com.

PLUS: Join Lifeline Theatre every Saturday and Sunday at 12 p.m. during the run of We Found A Hat (following the 11 a.m. show, or before the 1 p.m. show) for our Stories Come Alive! Hour. Children will enjoy an interactive storytelling session and on-your-feet theatre games. The cost is only $5 per child. Reservations are recommended, though not required. Contact Lifeline Theatre at 773-761-4477 for more information. 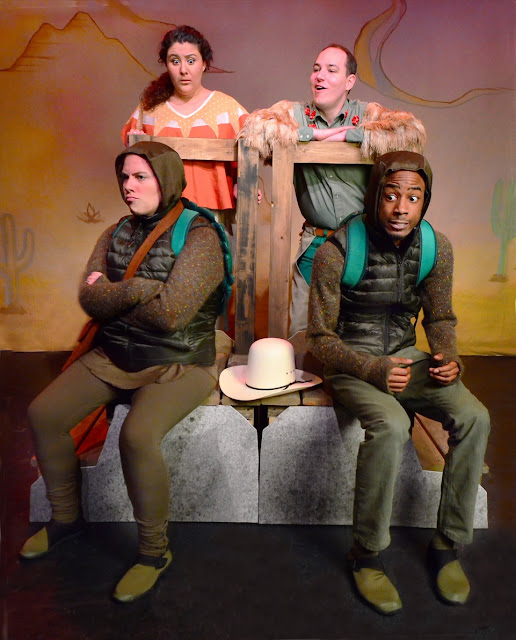 L to R: Amanda Roeder as Sizi, Gabriella Fernandez as Sun, Scott Sawa as Cactus, and Terry Bell as Kai

The complete cast and production team for We Found A Hat includes:

Lifeline Theatre also offers “Name Your Price” tickets one half-hour before the show (subject to availability), group rates and other discounts available upon request. A party room is available for full-service birthday and special event parties. Lifeline Theatre is accessible by CTA (Red Line Morse stop/busses) and free parking is available at Sullivan High School (6631 N Bosworth Ave., lot located on the corner of Bosworth Ave. and Albion Ave., with the entrance on Albion) with free shuttle service before and after the show. Street parking is also available. Lifeline is accessible to wheelchair users and visitors who need to avoid stairs. 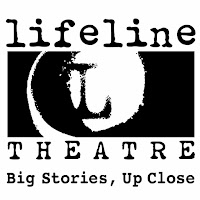 Now in its 36th season, Lifeline Theatre is driven by a passion for story. Our ensemble process supports writers in the development of literary adaptations and new work, and our theatrical and educational programs foster a lifelong engagement with literature and the arts. A cultural anchor of Rogers Park, we are committed to deepening our connection to an ever-growing family of artists and audiences, both near and far. Lifeline Theatre – Big Stories, Up Close. 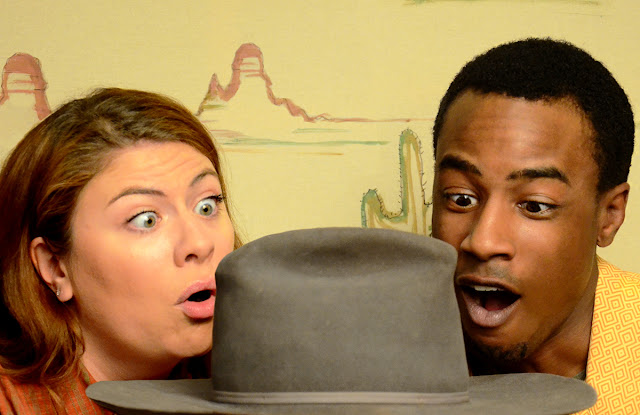 Lifeline Theatre’s “We Found A Hat,” adapted by Jessica Wright Buha, directed by Manny Tamayo, based on the book by Jon Klassen; previews begin Saturday, January 12, 2019, running through Sunday,  February 17. Lifeline Theatre is located at 6912 N. Glenwood Ave. Chicago, IL 60626. For tickets call the box office at 773-761-4477 or visit www.lifelinetheatre.com.


Disclosure: Thanks to Lifeline Theatre for partnering up with ChiIL Mama and providing tickets for our giveaway and for review purposes. As always, all opinions are my own.
Posted by Bonnie Kenaz-Mara at 2:27 PM