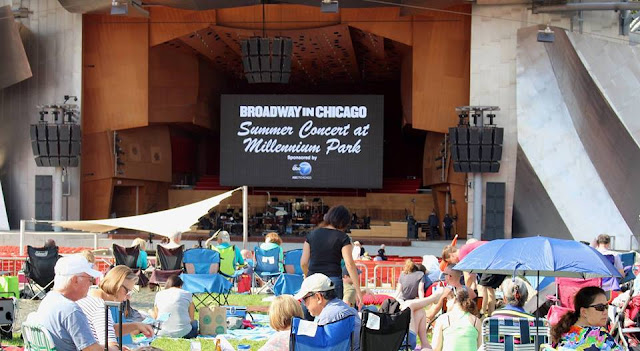 Broadway In Chicago is delighted to announce their annual FREE BROADWAY IN CHICAGO SUMMER CONCERT, sponsored by ABC 7 Chicago and hosted by Janet Davies, ABC 7 Chicago’s entertainment reporter and host of the entertainment and lifestyle program 190 NORTH on ABC 7. The concert will take place on Monday, August 13, 2018 at 6:15 p.m. at the Jay Pritzker Pavilion at Millennium Park (201 E. Randolph St). The Broadway In Chicago Summer Concert at Millennium Park is presented with the City of Chicago Department of Cultural Affairs and Special Events. This year, there will be preview performances from DEAR EVAN HANSEN, HEARTBREAK HOTEL, ROALD DAHL’S CHARLIE AND THE CHOCOLATE FACTORY and MISS SAIGON. More performances will be announced closer to the event.

“This is the highlight of the summer for Broadway fans – it’s like ‘Broadwaypalooza’,” says Eileen LaCario, Vice President of Broadway In Chicago.

As the summer season kicks off in Millennium Park, some important changes are coming to improve security and the visitor experience at the park. The City of Chicago will implement a security perimeter and bag check for all concerts and events that take place in the park. Outside alcohol will be prohibited at the seven Jay Pritzker Pavilion events with the highest attendance, including the Broadway In Chicago Summer Concert. Additional food and beverage options will be available for purchase at various price points inside the venue. Subject to bag search at the security perimeter, guests will continue to be allowed to bring their own food and non-alcoholic beverages to all events at Millennium Park.

For more information on the Summer Concert and Broadway In Chicago, visit www.BroadwayInChicago.com.
Posted by Bonnie Kenaz-Mara at 10:28 AM