SAVE THE DATES: Adventure Stage Chicago “Hungers” for deeper connections with its 15th season

15th season of programming for young audiences to explore the challenges of “hunger,” both literal and metaphorical

Here at ChiIL Mama and ChiIL Live Shows, we've been enthusiastic fans of Adventure Stage Chicago for years. We're particularly excited for their upcoming season, since they're partnering up with some of our favorite people and companies. Adrian Danzig is a force of nature on stage and off, and we're jazzed to see him in the director's seat for The Adventures of Robin Hood by Scottish playwright, Oliver Emanuel, this fall. We're also huge fans of Chicago's Rough House Theater, who will be bringing their puppet prowess to The Stranger and the Shadow. Their Ubu the King was so impressive I bought one of their tank tops. We're also excited for Chicago pros, Andrew Marikis and Daryl Brooks teaming up on Fast Food Chain. We've caught much of their prior work all over the city in past years and we're thrilled they're working with ASC.

Adventure Stage Chicago (ASC), the participatory arts program of Northwestern Settlement (the Settlement), announces its 15th season of programming for young audiences, exploring the challenges of “hunger,” both literal and metaphorical, as the company applies its mission of telling heroic stories to the Settlement objective of disrupting generational poverty. The season will also be dedicated to Belna Reyes, the longtime Director of the Food Pantry and Support Services, who passed away this past year, as well as the Settlement’s commitment to providing assistance via the food pantry. ASC’s “Hunger” season features Oliver Emanuel’s adaptation of The Adventures of Robin Hood, Fast Food by Andrew Marikis created in collaboration with community partners; and The Stranger and the Shadow, based on the Golem of Prague and co- presented with Rough House Theater as part of the Chicago International Puppet Theatre Festival.

All performances take place at Northwestern Settlement’s Vittum Theater, 1012 N. Noble St. Tickets are $17 for adults and $12 for youth aged 14 years and younger. Group tickets are $10 for ten or more guests. Student matinee tickets are $7 for CPS and $8 for non-CPS groups. Tickets may be purchased at adventurestage.org or by calling 773.342.4141.

ASC believes in the power of the arts to promote change. Producing Artistic Director Tom Arvetis recently spoke about ASC’s commitment to serving the community: “Exactly how does a theatre participate in the effort to disrupt poverty? ASC embraces this question to serve the critical mission of our larger social service organization. We used it to guide our programming choices during the 2017-2018 season dedicated to literacy, and we return to it again as we announce our 2018-2019 season dedicated to hunger. The challenges of poverty are often layered and always complex. By isolating the markers of poverty (such as access to a quality education or access to nutritious food) and exploring them through a thematic lens, we become the civic space where these issues can be explored respectfully and with hope across generations.”

As a participatory arts company, ASC feature multiple options for audience engagement. Each production is presented with Spanish subtitles. Additionally, we frame each performance with a Curtain Conversation, asking audiences to keep a question in mind as they watch the play and return to it after the show; our lobby transforms into an interactive installation; and Learning Guides with show context and arts-integrated activities are available for teachers and parents. 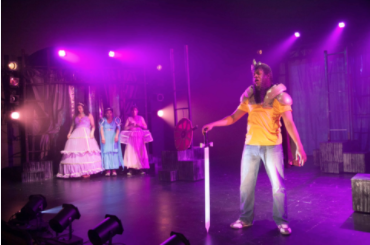 The Adventures of Robin Hood
October 20 – November 24, 2018 By Oliver Emanuel
Directed by Adrian Danzig
A corrupt sheriff plagues the commoners of Nottingham. His skyrocketing taxes are preventing the needy from being able to feed themselves! Who will stand up to the injustices and bring hope back to the people? Follow Robin Hood and his Merry Men as they take you on a journey of action, danger, and of course, archery. This medieval legend with a modern twist places a cast of two at the center of the story, reimagining the tale with enthusiasm, tenacity, and vigor.

About the Creative Team
Oliver Emanuel is a playwright based in Scotland. He was born in Kent, England, and studied at Leeds University and the University of East Anglia before settling in Glasgow in 2006. He has written for most of the major theatre companies in Scotland and his work has been seen across the UK, Ireland, Europe, Canada, USA and China. He also writes extensively for BBC radio. Oliver’s play Dragon won Best Show for Children and Young People at the UK Theatre Awards 2014.

Adrian Danzig has been in shows at The Goodman, The Second City, Chicago Children’s Theatre, Steppenwolf Studio, Berkeley Rep, Brooklyn Academy of Music and The Public Theater, and with Shakespeare & Company and Lookingglass. He has worked with Mary Zimmerman, Les Waters, Joanne Akalaitis, Tina Landau and Anne Bogart. He has performed his solo works at The Kitchen, P.S. 122, The Ontological Hysteric Theater and Soho Rep. He was an early Neo-futurist and a founding member of Redmoon Theater, Hubinspoke Theater and 500 Clown. He graduated from NYC’s High School of Performing Arts, received his BA from Oberlin College and his MFA from the School of The Art Institute of Chicago. He has studied clown with Ctibor Turba, Philippe Gaulier, Ronlin Foreman, Dominique Jando, Els Comediants, David Shiner and Avner the Eccentric. Adrian worked with The Big Apple Circus at its inception and also for seven years as a clown in Clown Care. Adrian has been the producing artistic director of 500 Clown since it began. 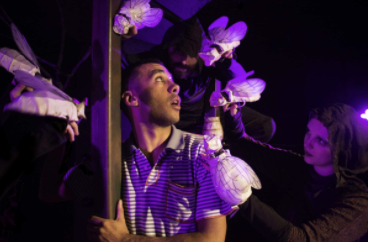 The Stranger and the Shadow
January 26 – February 16, 2019 Co-presented with Rough House Theater
An outsider enters a community that is guarded by a shadowy breathing barrier which feeds on the fear of its citizens. Rejected for her differences, she teams up with local misfits to bring to life a new creature powerful enough to fight the monstrous entity. The play uses human actors and life-size puppets to physicalize social forces, drawing inspiration from youth activists who seek to alter cultures of intolerance through empathy and inclusivity.

About Rough House Theater
Rough House connects individuals and communities through art that celebrates the weird things that make us unique, and the weirder things that bring us together. They create theater that captures the heart through the eye. Their shows use puppetry, music, and human performance to tell stories that are intimate, strange, and sincere.

Rough House has headlined the National Puppetry Festival, the international Physical Festival Chicago, and Open Eye Figure Theater’s Toy Theater After Dark Festival. The company has been a proud contributor to such Chicago institutions as Brain Frame and the Chicago International Puppet Theater Festival, of which it is a curatorial producing partner. Rough House has toured across the United States, performing in all variety of locations. 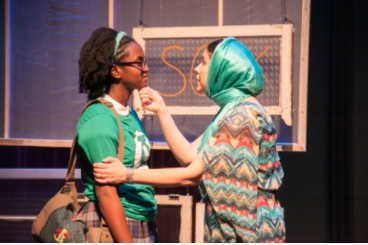 Fast Food Chain
April 27 – May 18, 2019 By Andrew Marikis Directed by Daryl Brooks
Fast Food Chain follows a brother and sister as they wrestle with the pressure of poverty and food insecurity in Chicago. They struggle to make it on their own until one day they discover a garden in the unlikeliest of places. It’s an adventure into the magical realism of African folktale, showcasing the power of community and storytelling in combating social issues.

About the Creative Team
Andrew Marikis is a writer, storyteller, and actor. He's worked with Seanachai, Lifeline, Boho, Sideshow, Adventure Stage, and many other theatres. He loves hearing a story that's totally true, and way too crazy to be true; and he harbors a not-so-secret obsession with dinosaurs. For more about him, check out www.andrewmarikis.com.

Daryl Brooks is happy to be back at Adventure Stage after directing 2017’s Akeelah and the Bee. He recently directed the award-winning hit The Black Pearl: The Story of Josephine Baker at The Black Ensemble Theater. His other credits include Men of Soul, I Am Who I Am: The Story of Teddy Pendergrass, and The Marvin Gaye Story. 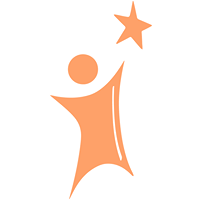 About Northwestern Settlement and Adventure Stage Chicago:
Northwestern Settlement nurtures, educates and inspires children and families across Chicago. The Settlement’s success results from a commitment to treating every person who enters its doors with dignity and respect, while supporting them with transformational programming designed to disrupt generational poverty. The Settlement has led the way in innovative programming by offering residential science and environmental education for inner-city youth, launching successful charter schools, and adding a theater so children and teens have a forum for expressing their life experiences.

The Settlement’s Adventure Stage Chicago (ASC) is one of the only theaters in Chicago to develop and present works specifically for pre-teen and teenage audience. ASC also offers: Neighborhood Bridges, the in-classroom arts residency program; Trailblazers, a youth mentoring arts program; summer drama camps; and drama instruction in the Settlement’s Rowe Elementary School.
Adventure Stage Chicago is a member of The League of Chicago Theatres, The National Guild for Community Arts Education, Theatre Communications Group (TCG), and TYA/USA. 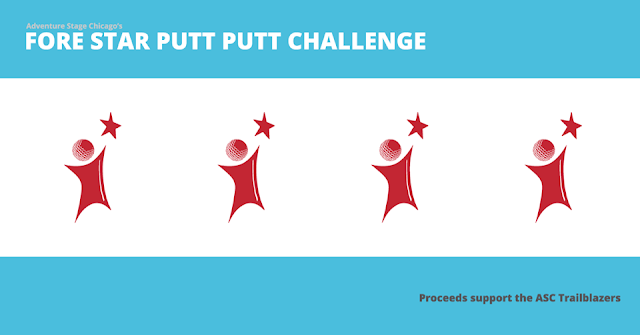 Help Out:
Join ASC “fore” a night of food, fun, and mini golf! Our latest fundraiser gives you the chance to show-off your short game with a mini golf challenge to win fabulous prizes. Festivities run from 6pm – 9pm at Diversey Range & Mini Golf with all proceeds going to the Trailblazers, Adventure Stage’s free mentoring program for Chicago youth. Food and drink is included with each ticket.

Individual tickets are $50 or $180 for a team of four. Dust off that Masters Jacket and reserve your tickets today!

In the event of inclement weather (rain, thunderstorms) and the course is closed, the Putt Putt tourney will be cancelled and will not be rescheduled. Team registrants will be notified by email no later than 4pm on June 4. Your registration fee will be non-refundable, but you will receive a tax-deduction acknowledgement for the amount allowed by law. Thank you for supporting the Trailblazers!

Posted by Bonnie Kenaz-Mara at 2:02 PM