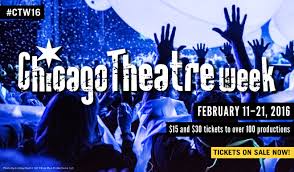 Here at ChiIL Mama and ChiIL Live Shows, every week is theatre week. We adore the Chicago scene, and review lots of shows year round. In fact, we're reviewing 6 this week. Chicago Theatre Week is your turn to attend shows like a critic without breaking the bank! Check back with ChiIL Mama (fam friendly) & ChiIL Live Shows (adult) frequently for our top picks, original reviews, and Chicago theatre news. Then get out and see a show... or two, or more.

Chicago Theatre Week is an annual celebration of the rich tradition of theatre-going in Chicago, will take place February 11 – 21, 2016, spanning a week and two full weekends. Now in its fourth year, Chicago Theatre Week is a program of the League of Chicago Theatres in partnership with Choose Chicago. Tickets are $30, $15, or less and are on sale now. Advance tickets highly recommended as many productions sell out at these smokin' deals! A list of participating theatres is on ChicagoTheatreWeek.com.

In February 2015, 116 productions offered value-priced tickets for performances during Chicago Theatre Week. Almost 10,000 Chicago residents and visitors spanning 40 states attended a show during Chicago Theatre Week. This coming February, visitors and residents will again have the opportunity to sample the extraordinary range of theatrical offerings throughout Chicagoland.

“Last year, Chicago Theatre Week was expanded to 11 days and it was the most successful one yet.  Theatre Week, with tickets on sale for comedies, dramas, musicals, and the entire range of Chicago productions throughout our city offers the perfect opportunity for people to visit their favorite theatres, or to check out a new company,” comments Deb Clapp, Executive Director of the League of Chicago Theatres. “We are so thrilled to be able to share the amazing work this theatre community produces with Chicago audiences and visitors.”

Kate Lipuma, Executive Director of Writers Theatre and Chair of the League of Chicago Theatres Board adds, “Last season’s Theatre Week was a huge success as it offered Chicagoans and visitors even more opportunities to visit their favorite theatres and explore new companies all across the city and suburbs.  This season promises to be stronger than ever as we celebrate the tradition and quality of theatre in Chicago.” 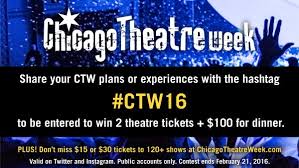