I was first introduced to Penn & Teller by a former roommate of mine who was a fire eating, stilt walking, Objectivist Clown.  He used to watch their shows endlessly between his own stand up comedy gigs.  If you've got a passion for magic, too, come check them out in person October 17th, for one night only. 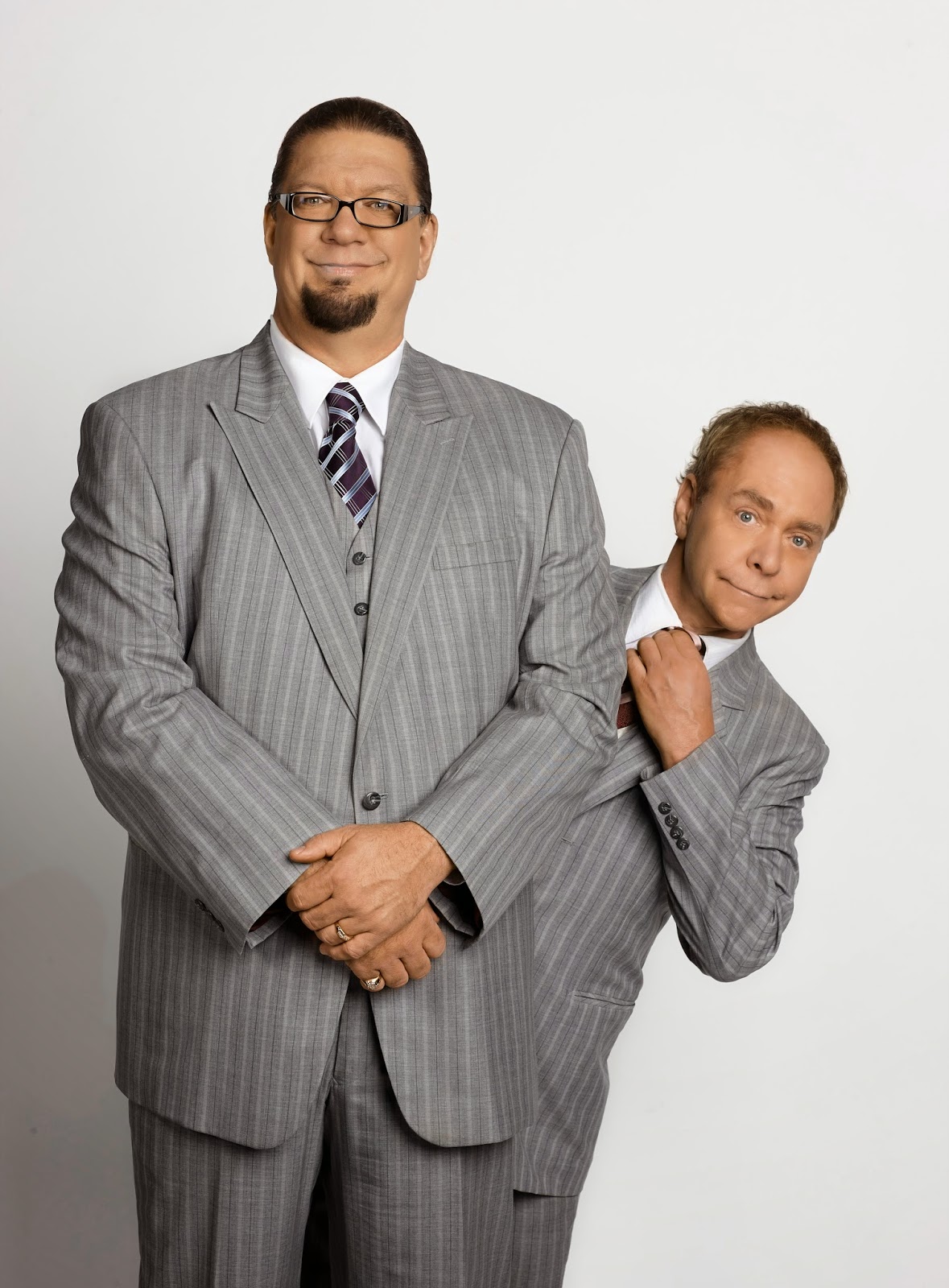 For tickets and information, visit ParamountAurora.com, call (630) 896-6666, or purchase in person at the Paramount Theatre box office, 10 a.m. to 6 p.m., Monday through Saturday. Recommended for ages 8 and up.

Penn & Teller turned the magic world upside down, and in the process, they have performed sold out runs on Broadway, done multiple world tours, produced a TV series that was nominated for 13 Emmys, written three New York Times best-sellers and have a Star on the Hollywood Walk of Fame. Experience what has made Penn & Teller one of the hottest tickets in Vegas for over 20 years.

For nearly 40 years, Penn & Teller have defied labels - and at times, physics and good taste - by redefining the genre of magic and inventing their own very distinct niche in comedy.With sold out runs on Broadway, world tours, Emmy-winning TV specials and hundreds of outrageous appearances on Letterman to Leno, Friends to The Simpsons, Chelsea Lately to Top Chef, comedy's only team shows no signs of slowing down.

With an amazing seven wins, including 2013 as "Las Vegas Magicians of the Year," their 12-year run at The Rio All-Suite Hotel & Casino makes them one of the longest running and most beloved shows in Las Vegas history, outselling every other resident magician on The Strip.

Their new TV show Penn & Teller: Fool Us debuted this summer on The CW, featuring European magicians performing their "best trick" for the titular duo for a chance to perform live at Penn & Teller's Las Vegas venue.

Their Showtime series, Penn & Teller: BS!, was nominated for 13 Emmys and is the longest-running series in the history of the network. They also starred in Penn & Teller Tell A Lie for the Discovery Channel in 2011. Their acclaimed 2013 documentary film, Tim's Vermeer, followed inventor Tim Jenison on his quest to discover the methods used by Dutch Master painter Johannes Vermeer.

Along the way, they've written three New York Times best-sellers, hosted their own Emmy nominated variety show for FX, starred in their own Emmy winning specials for ABC, NBC and Comedy Central and produced the critically lauded feature film documentary The Aristocrats.

As individuals, they are just as prolific. Teller directed a version of Macbeth that toured the East Coast to raves from The New York Times and Wall Street Journal and co-wrote and directed the Off-Broadway thriller Play Dead. Penn Jillette has written three books, including the 2011 New York Times best seller "God No!", hosted the NBC game show Identity, donned his ballroom shoes for the 2008 season of ABC's hit Dancing With The Stars, and showed his business savvy on the 2013 season of NBC's All-Star Celebrity Apprentice.

With inclusions in the New York Times crossword puzzle, as answers on Jeopardy and Who Wants To Be A Millionaire, their status as cultural icons and the preeminent duo in comedy was once again reinforced when Katy Perry personally asked them to co-star in the video for her #1 song, "Waking Up in Vegas." In April 2013, they were honored with their very own star on the Hollywood Walk of Fame. For more information, visit PennAndTeller.net.

Penn & Teller is sponsored by Comfort Suites Aurora and Sikich.

In addition to the lowest major theater subscription prices anywhere in Illinois, subscriber benefits at the Paramount have never been better. Purchase four or more shows and you automatically reap many benefits as a season subscriber, including the best seats in the house, easy ticket exchange privileges, and first notice of added shows and special subscriber events. Subscriber discounts range from 5% to 15% off single ticket prices, depending on how many shows you buy.

To become a subscriber or to purchase single tickets to individual shows, please call the box office at (630) 896-6666, stop by in person at 23 E. Galena Blvd. in Aurora, or go online at ParamountAurora.com.

About The Paramount Theatre
The Paramount Theatre is the center for performing arts, entertainment and arts education in Aurora, the second largest city in Illinois. Named "One of Chicago's Top 10 Attended Theatres" by the League of Chicago Theatres, the 1,888-seat Paramount Theatre, located in the heart of downtown Aurora at 23 E. Galena Blvd., is nationally renowned for the quality and caliber of its presentations, superb acoustics and historic beauty.

The Paramount Theatre opened on September 3, 1931. Designed by nationally renowned theater architects C.W. and George L. Rapp, the theater captures a unique Venetian setting portrayed in the art deco influence of the 1930s. The first air-conditioned building outside of Chicago, the Paramount offered the public a variety of entertainment, including "talking pictures," vaudeville, concerts and circus performances for more than 40 years.  In 1976, Aurora Civic Center Authority purchased the Paramount and closed the theater for restoration. The $1.5 million project restored the Paramount to its original grandeur. On April 29, 1978, the Paramount Arts Center opened, offering a variety of theatrical, musical, comedy, dance and family programming. In 2006, a 12,000-square-foot, two-story Grand Gallery lobby was added, with a new, state-of-the-art box office, café and art gallery.

Today, the Paramount produces its own Broadway Musical series, presents an eclectic array of comedy, music, dance and family shows, and on most Mondays, screens a classic movie. For tickets and information, go to ParamountAurora.com or call (630) 896-6666.

The Paramount Theatre continues to expand its artistic and institutional boundaries under the guidance of Tim Rater, President and CEO, Aurora Civic Center Authority; Jim Corti, Artistic Director, Paramount Theatre; a dedicated Board of Trustees and a devoted staff of live theater and music professionals.

Email ThisBlogThis!Share to TwitterShare to FacebookShare to Pinterest
Labels: Aurora IL, magic, One Night Only, Penn & Teller, The Paramount Theatre