How many women can say they turned 90 and released a new album last week?! We think that honor belongs solely to Ella Jenkins!

Here at ChiIL Mama, we are so excited to announce the release of Ella Jenkins’ 40th album from Folkways, More Multicultural Children’s Songs, out 8/5/14 (one day before her 90th birthday)!  This prolific and powerful performer is truly a treasure. 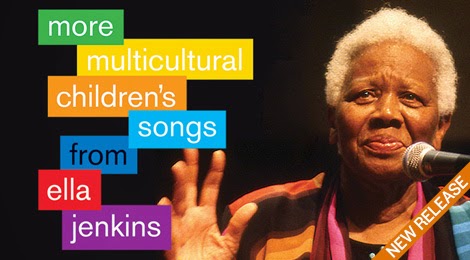 Disclosure:  Thanks to Ella Jenkins and Smithsonian Folkways for partnering up with ChiIL Mama and providing us with giveaway and review copies. As always, all opinions are our own.

We've been huge fans of Ella's work for decades. Back when my kids were toddlers, my daughter Sage mistook the similar sounding Ella/Hello and adamantly insisted her name was "Hello Jenkins", and wouldn't be corrected. When Sage gave her a big hug and called her "Hello Jenkins" at a show, we told Ella the story and she smiled and laughed good naturedly.

Somehow it fits her. Her multicultural music is a joyous greeting the world over, that's spanned 40 albums and 57 years. Hello Jenkins indeed! 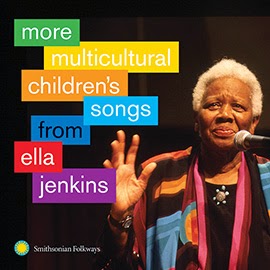 Enter HERE for your chance to win! Our full review is coming shortly. In the mean time, enter to win a copy of your own. Open nationwide to anyone in the US. Enter through midnight August 26th.

Sage held Ella's hand in a circle dance when she played Kidzapalooza waaaaay back in 2006. Here are a few of our shots from that show. Ella played Kidza again in 2013 and holds the distinction as oldest performer at Lollapalooza to date. 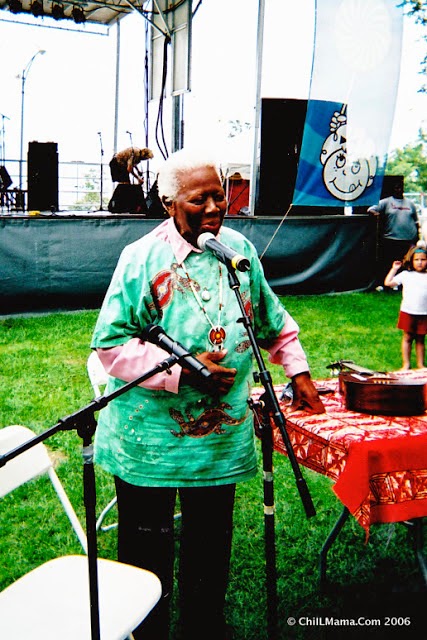 Ella Jenkins celebrating her 82nd birthday at Kidzapalooza in 2006 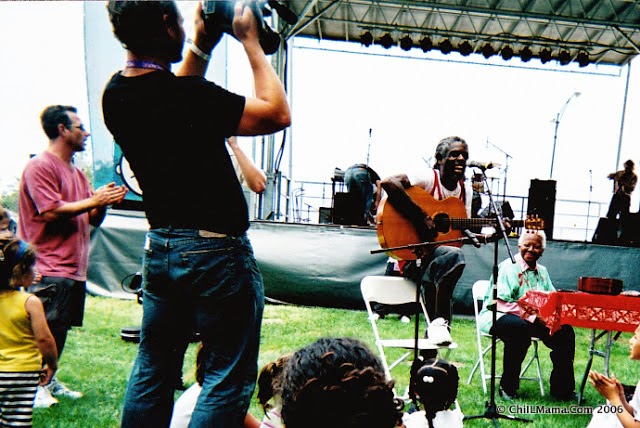 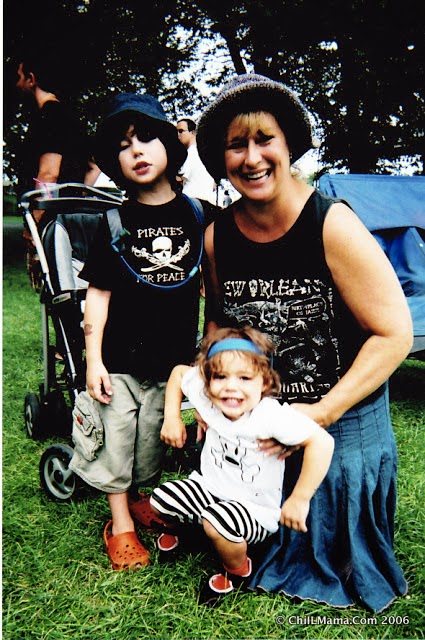 I was so happy to be approached to add birthday wishes to a card for her, last week at the VIR Kidzapalooza Brunch at The James Hotel, along with a number of our favorite kindie artists. Of course I referenced the "Hello Jenkins" story. 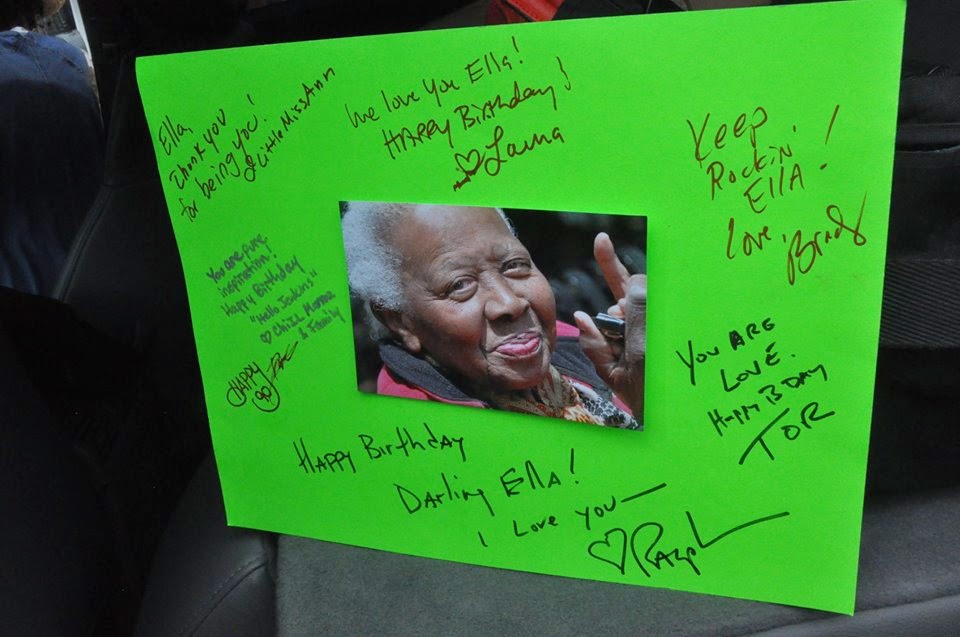 The 40th album presents a selection of the Grammy-winning artist’s favorite songs learned from cultures around the world, inspiring respect and rejoicing in the traditions of others among children of all ages.

Thanks to Lynn Orman Weiss, who shot this fun video greeting for Ella with kindie musicians Brady Rymer (in from NYC), and Chicago's own Little Miss Ann (Ann Torralba), Jeanie B. and Laura Doherty. Lynn invited us to share it with you.

Ella is one of our favorites here at ChiIL Mama. She is such an incredible artist and a fine example of all that's right and good in the world. She was a "kindie" or kids' indie musician eons before the genre officially existed and we don't know a children's musician today who hasn't been touched, inspired and influenced by her. It's amazing to me that Ella has now influenced kids today, their parents, their grandparents and even their GREAT grandparents.


No Smithsonian Folkways release has been more popular than Ella Jenkins’ 1995 album Multicultural Children’s Songs, a selection of her favorite melodies learned from cultures around the world. In celebration of Ella’s 90th birthday on August 6, Smithsonian Folkways released ‘More Multicultural Children’s Songs’ (official release date 8/5/14). The album is her 40th title spanning an amazing 57 years and features 20 classics from her prolific catalogue.

More Multicultural Children’s Songs inspires respect and rejoicing in the traditions of others among children of all ages. “Hukilau” takes the listener to a Hawaiian fish-eating ceremony, “Rushing Around in Russia” teaches greetings, and “Qué Bonita Bandera” is a beautiful ode to the Puerto Rican flag. Ella also makes pit stops in China, Germany, Greece and beyond throughout this 20-track journey. More Multicultural Children’s Songs includes a beautiful essay from Ella herself, in which she says: “The songs and stories were inspired by the wonderful people I’ve met all over the world, and in the spirit of how they shared their customs and songs with me, I pass them on to you.”

Chicago-based Ella Jenkins, known as “The First Lady of Children’s Music,” has received many awards over her long career, including a 2004 GRAMMY Lifetime Achievement Award (the only such award given to a children’s musician), and an Honorary Doctorate from the Erikson Institute the same year. In 2005, cELLAbration, an album of Ella’s songs performed by Sweet Honey In The Rock, Riders in the Sky, Tom Paxton, Cathy & Marcy, Pete Seeger, Tom Chapin, and others won the 2005 GRAMMY for Best Children’s Album.

Ella was the first woman and first children’s musician to receive the ASCAP Foundation’s Lifetime Achievement Award in 1999, and in 2009 she earned a United States Artists award. She is one of the first African American women to have a TV show, when in the 1950s she hosted a weekly segment on “The Totem Club,” a children’s program broadcast in Chicago. Her “Me Too Series” films were featured numerous times on “Sesame Street,” and she has also appeared on “Barney and Friends” and “Mister Rogers’ Neighborhood.”

Her 1966 album ‘You'll Sing a Song and I'll Sing a Song’ is part of the Library of Congress National Recording Registry. In 2013, Ella kicked off the Lollapalooza festival kid’s stage. Currently, her recordings of “Wade in the Water” and “A Man Went Down to the River” are featured in Alvin Ailey American Dance Theater’s internationally acclaimed ballet Revelations.

“Ella Jenkins is a constant source of inspiration and a bottomless well of songs, ideas, and spirit. She is by far the most worldly performer that children’s music has ever known.” -- Dan Zanes No Smithsonian Folkways release has been more popular than the 1995 album Multicultural Children’s Songs, a selection of Ella Jenkins’ favorite melodies she learned from cultures around the world. Now, Folkways brings you More Multicultural Children’s Songs from Ella Jenkins, 20 additional classics from The First Lady of Children’s Music’s prolific work. Multilingual, multicultural, and multi-national, this collection of timeless tracks inspires respect and rejoicing in the traditions of others. 44 minutes, 20 page booklet with lyrics.

Disclosure:  Once again, thanks to Ella Jenkins and Smithsonian Folkways for partnering up with ChiIL Mama and providing us with giveaway and review copies. As always, all opinions are our own.

Posted by Bonnie Kenaz-Mara at 7:21 PM