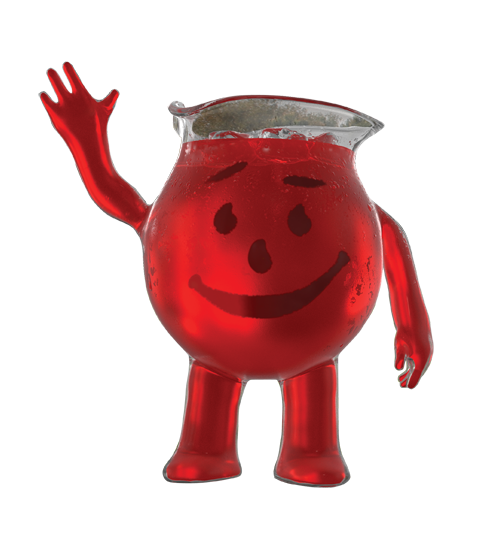 NEW KOOL-AID MAN SAYS 'OH, YEAH' TO HIS FAVORITE SPOTS IN CHICAGO
BRINGING SMILES WITH FREE TICKETS AND SWAG FOR HUNDREDS OF FAMILIES

Hey Chicago!  ChiIL Out with The Kool-Aid Man TODAY.  He will be surprising Chicagoans with hundreds of complimentary admission tickets and fun swag on Thursday, August 15 (Oh Yeah!). After going rogue for decades and now sporting a new look, everyone’s favorite pitcher is making a colorful splash on the scene – and one of his first stops is Chicago – where he will be bringing joy to the city with “Random Acts of Fun” at the most popular and iconic attractions.
The reason he’s in Chicago: The Kool-Aid Man has personally hand-picked his top 5 “koolest” destinations in Chicago and, on August 15th, he’s inviting local families to get the true Chicago experience at each location. Follow along with the hashtag #KoolAidChicago on Twitter and on his personal Facebook page as the Kool-Aid Man visits iconic Chicago hot spots – the Shedd Aquarium, Lincoln Park Zoo, North Avenue Beach, Wendella Boat Tours and Movie in the Park (McGuane Park). Here’s a Look at Kool-Aid Man’s Day:
·         9am-10am: Shedd Aquarium
·         11am-12pm: Lincoln Park Zoo
·         2-3pm: North Avenue Beach
·         4-5pm: Wendella Boat Cruise
·         7-8: Movies in the Park at McGuane Park

Not able to meet the man for an in-person photo opp? No problem! Download the Kool-Aid Man PhotoBomb mobile app and you can snap fun pics all year long. New in June, the app enables fans to move, scale and manipulate images to allow Kool-Aid Man to integrate seamlessly into your existing personal photos. All photos can be shared across popular social media platforms including Facebook, Twitter and Instagram.
Beloved Red Pitcher Bestows 'Random Acts of Fun' for Chicago Area Families
at Iconic Family-Focused Destinations

WHAT:   With just days to go before thousands of parents send their kids back to school, the new Kool-Aid Man is making a splash with ‘random acts of fun’ in Chicagoland.
Debuting a brand new makeover, the new Kool-Aid Man will be visiting his top 5 Chicago family-friendly destinations to celebrate the end of summer and bring smiles to hundreds of unsuspecting families.

WHERE:   Kool-Aid Man has picked his five favorite spots in Chicago and will delight families with ‘random acts of fun’ at each destination :

9AM   Shedd Aquarium: 100 tickets - It all begins at the city’s favorite aquatic learning destination for families when Kool-Aid Man will buy tickets for the first 100 in line

4PM   Wendella Boat Cruises: 100 rides Thanks to Kool-Aid Man, there will be a boat full of lucky Chicagoans cruising along Lake Michigan

WHY:   It’s all about unexpected random acts of fun that don’t bust the budget.  Kool-Aid Man is bound to bring on the smiles as he makes his way around the city creating memorable moments for everyone.

Fans can follow Kool-Aid Man’s tour of his 5 fun spots on Facebook at www.facebook.com/koolaidman and using the hashtag #KoolAidChicago


Kool-Aid is the iconic brand of flavored drink mix owned by Kraft Foods that has stood for fun and flavor for generations. The Kool-Aid Man, who has been the embodiment of the brand since he first appeared in an advertisement in 1954, has undergone a serious makeover with a brand new modern look.  He has also introduced the Kool-Aid “Photobomb” app that lets his fans with Android or iPhones photobomb their pictures with the famous spokespitcher. For more information visit www.kool-aid.com or www.facebook.com/koolaid.
Posted by Bonnie Kenaz-Mara at 12:17 PM