REVIEW: The Nutcracker by The Joffrey Ballet At Lyric Opera House December 3 – 27, 2022

The Nutcracker by The Joffrey Ballet 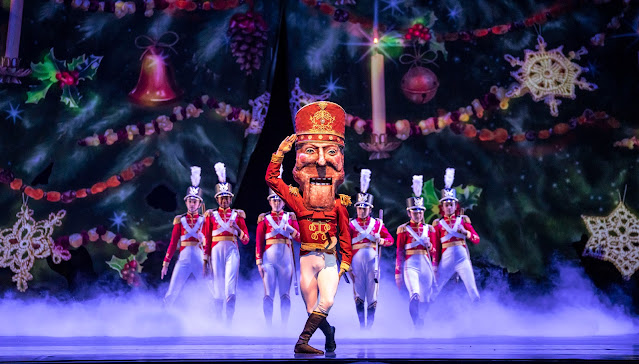 The Joffrey Ballet, The Nutcracker

“Everything is beautiful at the ballet,” goes the dreamy song from A Chorus Line, and that sentiment certainly applies to the Joffrey Ballet’s annual holiday production of The Nutcracker. The setting has a wonderful Chicago twist by occurring among the excitement of the World’s Columbian Exposition of 1893. The background depicts the world’s first Ferris Wheel and the Statue of the Republic by Daniel Chester French. (a smaller replica of “the Golden Lady” stands at a traffic circle in Jackson Park--unless construction of the Obama Presidential Library has forced its temporary removal.)

Of course, the marvelous music by Tchaikovsky, played by the Lyric Opera Orchestra, remains. The dancing and choreography are, as expected, fabulous and inventive. Brian Selznick, the talented children’s author/illustrator, designed the story. The costumes and masks by Julian Crouch are wonderful. I loved the couples who had the men’s top hats and their vests matching their partner’s sashes at their waists. Adding to the magic are the Projection Designs by 59 Productions. 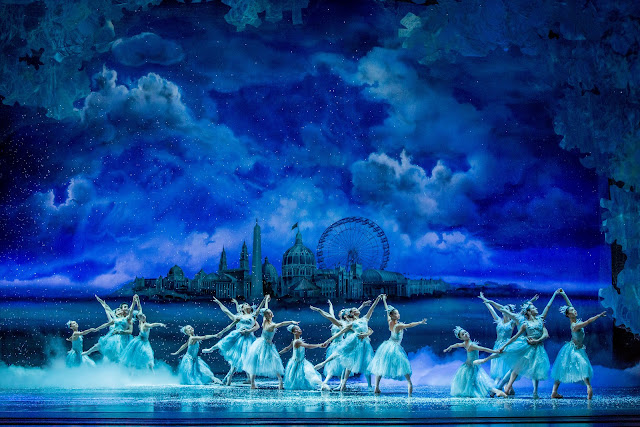 The Joffrey Ballet, The Nutcracker
Photo by Cheryl Mann

Clara has been changed to Marie, and her mother is a sculptress designing the famous “Golden Lady,” a neat feminist touch. They live in a rather primitive log cabin, where their sad little Christmas tree resembles a Charlie Brown tree, (Or as our brother Marty so eloquently phrased it, “Known by its Latin name,’Charlius Brownius,’” due to the ugly trees our father procured every year.)

A very cute little girl sitting behind us offered an adorable commentary about the plot. “They’re playing games!” explained her grandma about the children at Marie’s cabin. When the bratty brother Franz breaks the Nutcracker gift (some things never change), our little friend blurted,”He broke it! She’s crying!” Then, The Great Impresario (with an awesome red cape he swept around to lovely theatrical  effect) “fixed it!” The gift was hidden in a cabinet, and it was  revealed. “The Nutcracker was in there! I knew it!” blurted our young theater goer.

The scene with the rats was creepy, like being in our Chicago alley. (Another peculiar, perhaps unintended, reference to our beloved city…) I especially liked when the Rat King was stabbed and then dramatically hoisted off, twitching to the end, by his followers.

Grandma behind us explained, ”The Nutcracker is a prince. They are falling in love!” (“I liked seeing the men’s butts!” declared my sister, with brutal, contrasting honesty about the pas de deux.) A gondola boat, resembling the ones from the Great Basin at the 1893 Fair, carries Marie and her prince away. There are projections of the German House, Moorish Palace, and Buffalo Bill’s Wild West Show to remind us of the Chicago location. In fact, one of the traditional Nutcracker dance numbers was now performed by “Buffalo Bill” with his lasso and three rowdy cowgirls. (The real Buffalo Bill had the last laugh at the 1893 Fair. Refused admittance by the officials at the Fair, Buffalo Bill set up camp outside the fairgrounds, charged 50 cents to get in, same as Fair admission fee, and made a fortune.)

One of the traditional dance numbers brought Little Egypt to mind. There was a scandalous belly dancer in 1893 named Little Egypt who performed just outside the fairgrounds. One of the ballet dancers was carried in by her partner and proceeded to perform a sensuous, sexy dance that had everyone riveted. She was amazing. My sister described them as “inspiring” and declared “what poise!”

Our little friend in the row behind us was unhappy by Act II. At two hours, the show was simply too long for her. There was a lot of crying, whimpering, and shushing. “No child under ten should be allowed into this performance,” was my sister’s takeaway announcement.

But that said, please make a family tradition of seeing Joffrey Ballet’s fantastic production of The Nutcracker. Get your mandatory photos in the lobby. You will make extraordinary memories.

Catherine Hellmann is a theater junkie, a teacher, a mom of three, and a weirdo who keeps her Christmas tree up all year round. It makes her happy. 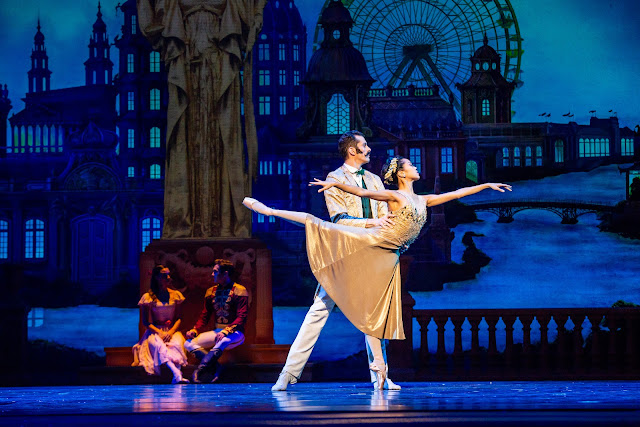 The Joffrey Ballet’s critically-acclaimed reimagined classic, The Nutcracker by Tony Award®-winning choreographer Christopher Wheeldon, returns to the Lyric Opera House, 20 North Upper Wacker Drive, in 25 performances, December 3 – 27, 2022. Set in Chicago’s World’s Fair in 1893, Wheeldon’s The Nutcracker highlights the rich cultural heritage of Chicago and the wonder of the season.

“This glorious production only gets better with time,” said Ashley Wheater, The Mary B. Galvin Artistic Director. “Now, six years since its debut, the holiday magic of the Joffrey’s version of The Nutcracker is perhaps more poignant than ever, a story of family and adventure. But more than anything, it is an homage to a city we cherish so much, and we look forward to celebrating another incomparable holiday season in Chicago once more.”

“I have many fond memories of watching The Nutcracker throughout my life, and even now, dozens upon dozens of viewings later,” Greg Cameron, President and CEO, added. “What I love most is that no matter how many times I see it, the spectacle and sheer wonderment still feels new. The Nutcracker has a way of reaching people, and we are most proud and fortunate that the Joffrey’s version continues to be a point of pride and joy for Chicagoans year after year.” 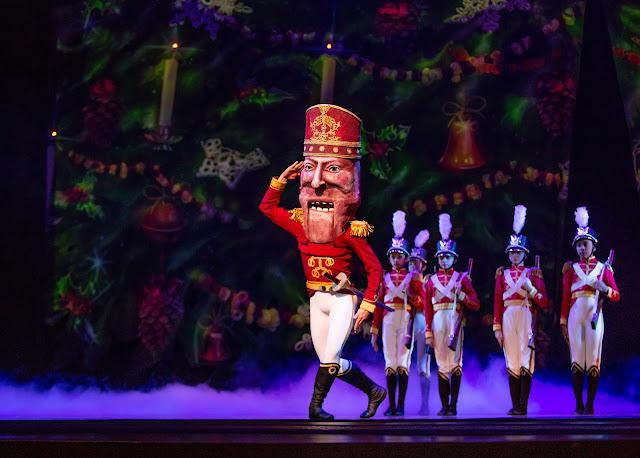 Alberto Velazquez and ensemble of The Nutcracker

Wheeldon’s American tale relocates Marie and her immigrant family to the Chicago World’s Fair in 1893, and opens as young Marie and her mother, a sculptress creating the Fair’s iconic Statue of the Republic, host a festive Christmas Eve celebration. After a surprise visit from the creator of the Fair, the mysterious Great Impresario, Marie embarks on a whirlwind adventure with the Nutcracker Prince through a dreamlike World’s Fair.

For the third year in partnership with Chicago’s Department of Cultural Affairs and Special Events, signature scenes from the production will be projected on the world’s largest canvas, Art on theMart. The digital art projection, designed by local production studio The Mill with music arranged by Joffrey Assistant Conductor & Company Pianist Michael Moricz, will be displayed on theMART’s 2.5 acre river-façade. It can be viewed nightly for free from the ‘Jetty’ section of the Chicago Riverwalk on Wacker Drive between Wells Street and Franklin Street November 19 – December 30, 2022, in two airings, at 7:30 and 8:00 p.m. More information can be found at artonthemart.com/programming. 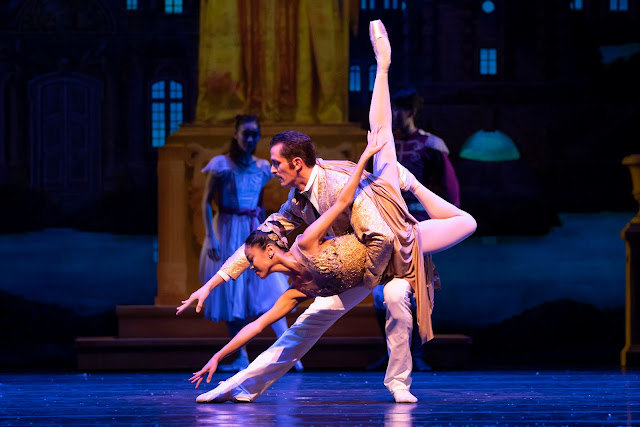 Single tickets start at $36 and are available for purchase online at Joffrey.org/Nutcracker, by telephone at 312.386.8905 or at Lyric Opera Box Office located at 20 N. Upper Wacker Dr.

About The Joffrey Ballet

The Joffrey Ballet is one of the premier dance companies in the world today, with a reputation for boundary-breaking performances for more than 60 years. The Joffrey repertoire is an extensive collection of all-time classics, modern masterpieces, and original works.

Founded in 1956 by pioneers Robert Joffrey and Gerald Arpino, the Joffrey remains dedicated to artistic expression, innovation, and first-rate education and engagement programming. The Joffrey Ballet continues to thrive under The Mary B. Galvin Artistic Director Ashley Wheater MBE and President and CEO Greg Cameron. 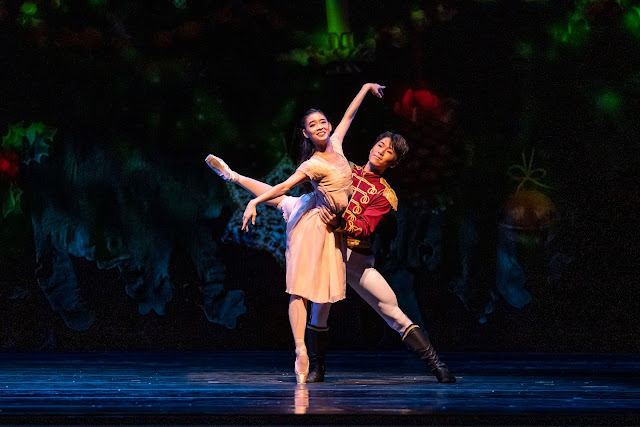 Posted by Bonnie Kenaz-Mara at 3:29 PM