REVIEW: THE WORLD GOES ‘ROUND at The Marriott Theatre Now Playing Through November 7th, 2021

The Songs of Kander and Ebb

Marriott Theatre in Lincolnshire, one of the most subscribed theaters in the nation, is re-opening with THE WORLD GOES ROUND, a musical revue featuring the songs of Kander and Ebb, the legendary musical duo. The cast includes several Broadway veterans as well as a host of talented Chicago favorites, so don’t miss this! 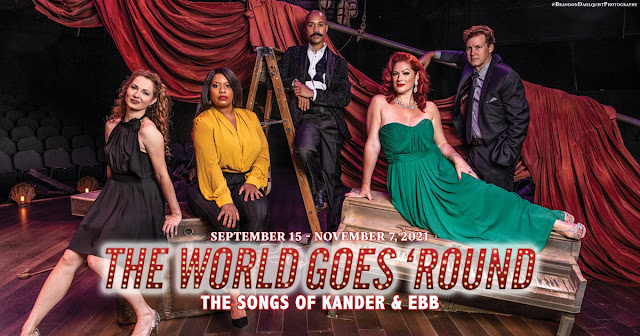 All Production Photos by Liz Lauren unless otherwise noted 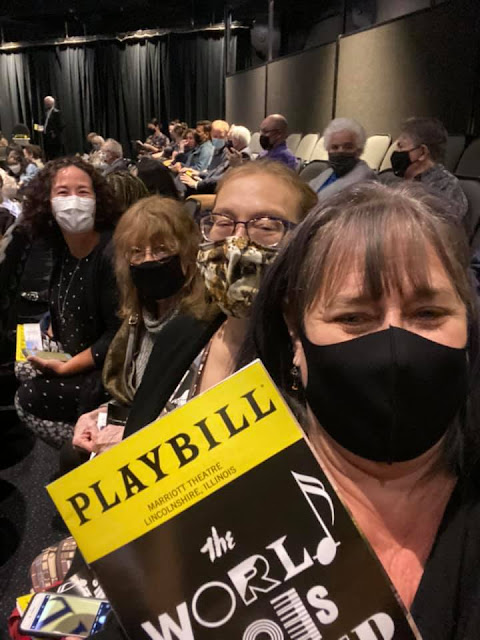 Photo by B Kenaz-Mara

As the masked Marriot Theatre audience tentatively ventures out for an experiment in non social distancing, a lone steamer trunk and a ghost light grace a barren stage, an apt visual as Chicago area stages have been dark for over two years now. Audiences and actors alike have a lot to unpack, emotionally and physically, as we negotiate the new reality of theatre openings in the waning days of covid and this was a lovely way to begin again. The energy and happiness was palpable as the stage lights came to life and colorful costumes, props, and actors again populated the stage. 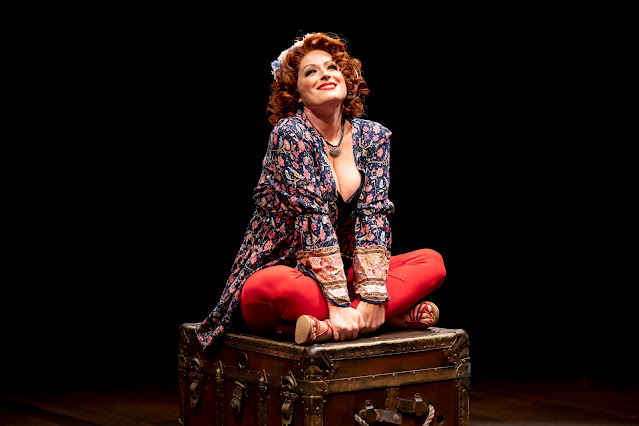 Things feel a bit daring with a packed house and no possibility of six feet of space between neighbors. Yet some experiences are worth a risk, and with vaccines and mask mandatory, a good portion of the theatre loving populace is tired of staring at their own walls and ready for some soul filling song and dance numbers. Marriot Theatre delivers. The World Goes Round is just the tonic for a pandemic weary populace.

Even in a COVID-abridged version with no intermission, to reduce movement in and out of the theatre, this show packs an impressive score of toe tapping favorites as the audience is taken on a journey through Kander and Ebb’s virtual hit parade of songs including showstoppers “Cabaret,” “New York, New York,” “All That Jazz,” and “Maybe This Time.” The revue also covers numbers from Chicago, Funny Lady, Kiss of The Spider Woman, Woman of The Year and more. 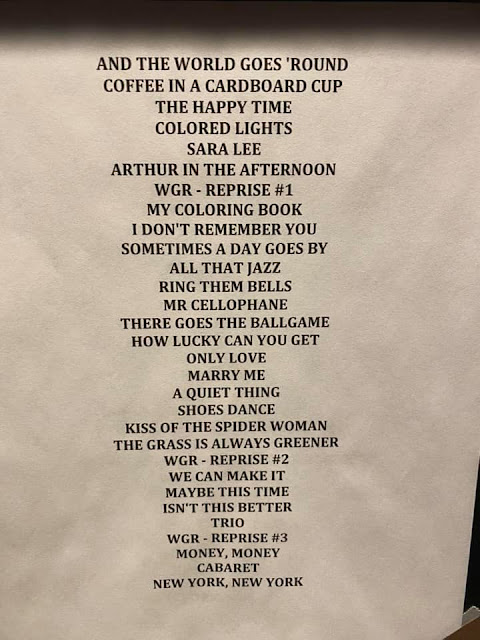 Photo by B Kenaz-Mara

Meghan Murphy, AKA: Big Red, has long been a favorite of ours here at ChiIL Mama and ChiIL Live Shows. It's such a joy to see her in a role where she's free to belt out the powerhouse vocals she does so well, and showcase both her range, and her iconic, retro style. The entire cast is top notch and a joy to see in action. 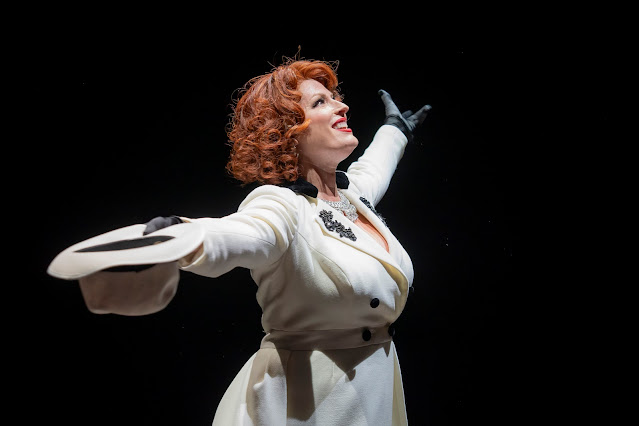 Break out your theatre garb and head on out for The Happy Time and All That Jazz.

Isn't This Better than sitting around the house? Highly recommended.

Free parking is available at all performances. To reserve tickets, please call The Marriott Theatre Box Office at 847.634.0200 or go to www.ticketmaster.com. Visit www.MarriottTheatre.com for more information. 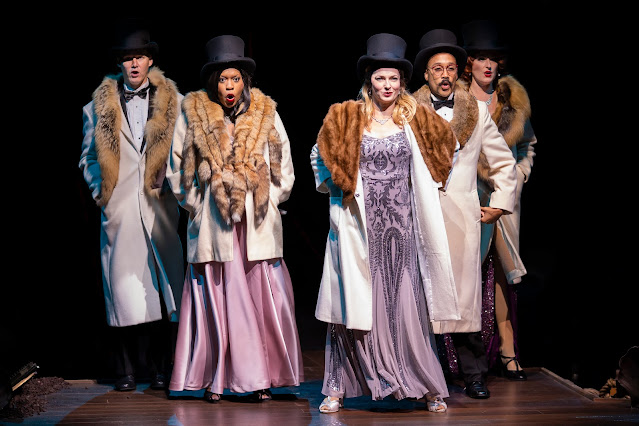 Check Out The World Goes 'Round Promotional Video Here

Tony & Drama Desk Award-nominated Director and Choreographer Marcia Milgrom Dodge (Ragtime 2009 revival) will direct and choreograph the Marriott Theatre production.  Milgrom Dodge recently appeared on 2 episodes of Disney+ ENCORE!. She says, “In our newly reimagined production, five friends meet in an abandoned theatre after almost two years of not being able to do what they love most – Perform! The company reflects on what they’ve lost, re-visits meaningful relationships, re-creates their favorite numbers--with choreography that tips its bowler-hat to the great Bob Fosse--and sings their hearts out, as souls are restored with renewed hope for the future.” Associate Director/Choreographer is Josh Walden, who also served with Milgrom Dodge as Associate Director and Associate Choreographer for the Tony nominated Broadway revival of Ragtime and has choreographed many productions at the Kennedy Center, The Muny and more. 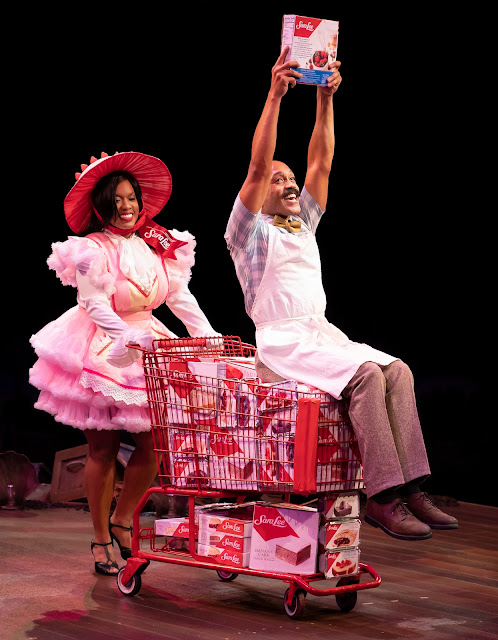 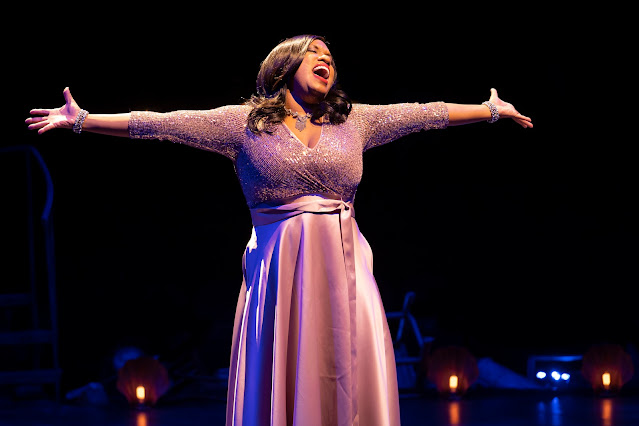 Allison E. Blackwell, a Marriott Theatre newcomer, returns to the Chicago area after playing Violetta in the World Premiere production of Pretty Woman: The Musical at the Nederlander Theatre. Allison has appeared in numerous Broadway productions including A Night with Janis Joplin (Aretha Franklin), Pretty Woman: The Musical (Violetta), The Gershwins’ Porgy and Bess and Disney’s The Lion King. 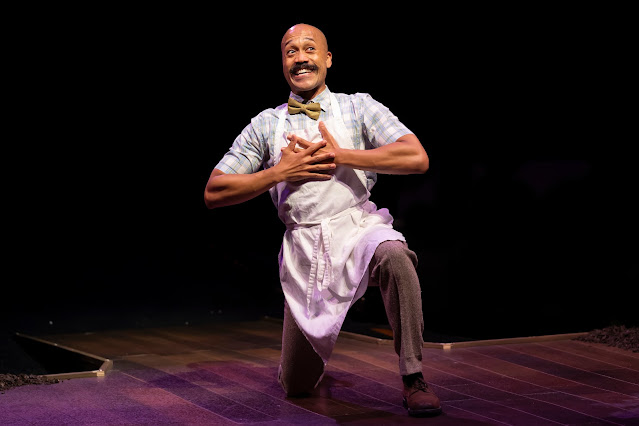 Joseph Anthony Byrd is thrilled to be back at the Marriott Theatre where he was last seen as Jacob in La Cage Aux Folles. Joseph also appeared as Lola in Kinky Boots on Broadway and in the Broadway tours of The Lion King and Mamma Mia! 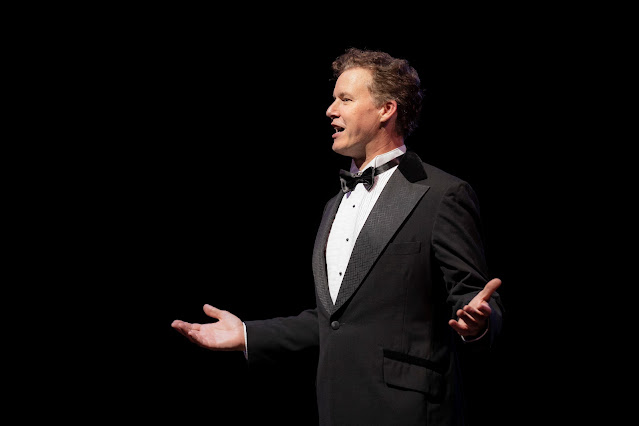 Chicago native and Broadway veteran Kevin Earley has also appeared at the Marriott Theatre in productions including City of Angels, Pirates of Penzance (Jeff Nomination), La Cage Aux Folles, and many more. Kevin earned a Joseph Jefferson Award for The Balladeer in Assassins and played Tommy in Goodman Theatre’s production of Brigadoon. 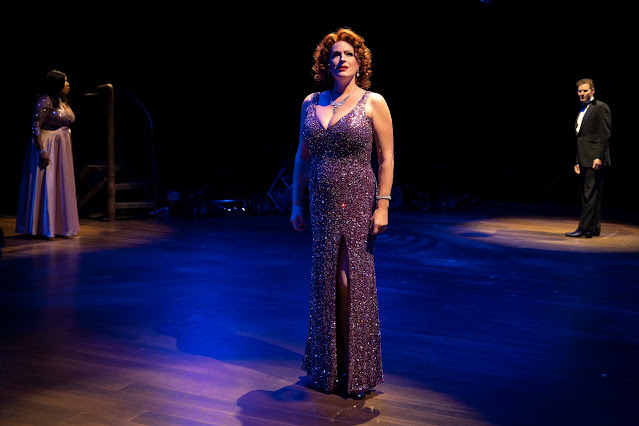 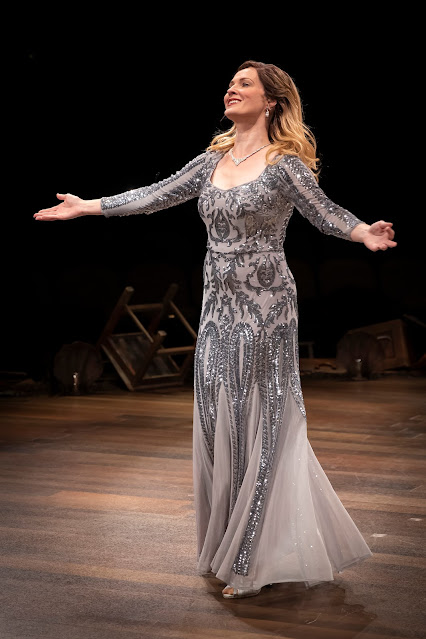 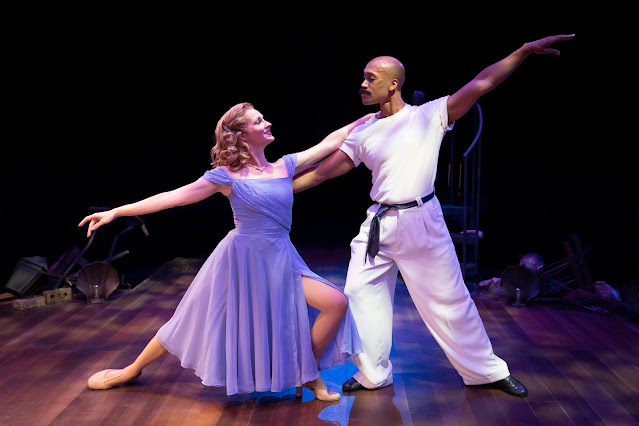 The performance schedule is as follows: Wednesdays at 1 p.m. and 7:30 p.m., Thursdays at 7:30 p.m., Fridays at 8 p.m., Saturdays at 4 p.m. and 8 p.m., and Sundays at 1 p.m. and 5 p.m.,with select Thursday 1:00 p.m. shows. Ticket prices range from $50 to $60, excluding tax and handling fees. Call for student, senior, and military discounts. On Wednesday and Thursday evenings there are a limited number of dinner-theatre packages available for purchase through the Marriott Theatre Box Office. To make a restaurant reservation, please call 847.634.0100. Reservations strongly recommended. Free parking is available at all performances. To reserve tickets, please call The Marriott Theatre Box Office at 847.634.0200 or go to www.ticketmaster.com. Visit www.MarriottTheatre.com for more information. The Songs of Kander and Ebb 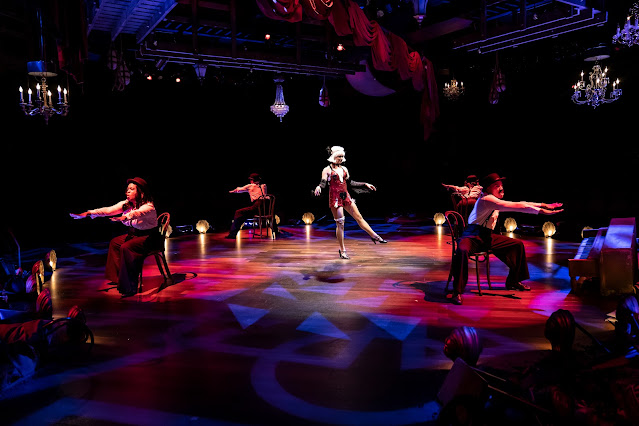 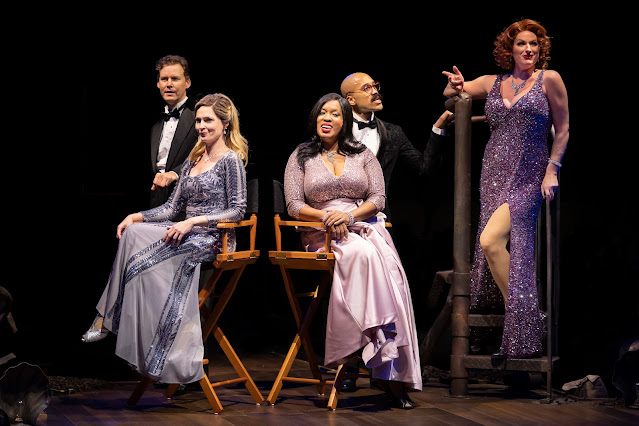 Along with a growing coalition of leading Chicagoland performing arts venues, for the health and safety of our audiences, artists and staff, face masks and proof of COVID-19 vaccine or appropriate negative test are required for all patrons during the run of THE WORLD GOES ‘ROUND. Additionally, to reduce movement in and out of the theatre, THE WORLD GOES ‘ROUND will be presented by special permission in a COVID-abridged version with no intermission. Protocol details are available at MarriottTheatre.com.

The Marriott Theatre, 10 Marriott Dr. in Lincolnshire, presents THE WORLD GOES ‘ROUND, the delightful musical revue featuring the works of John Kander and Fred Ebb, considered one of the most prolific and acclaimed Broadway musical creative teams of all time. The production will preview Wednesday, September 15th, open September 22nd, and close Sunday, November 7th. 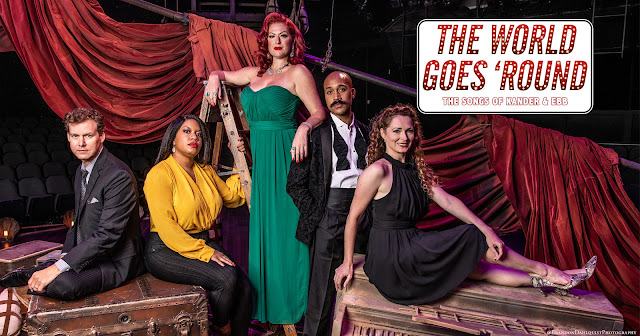 All Production Photos by Liz Lauren unless otherwise noted

Posted by Bonnie Kenaz-Mara at 5:59 PM