Chi, IL LIVE Shows On Our Radar:
HONEY, WE SHRUNK THE FAMILY!
TAKE A TRIP INSIDE THE HUMAN BODY AND OUT TO OUTER SPACE IN 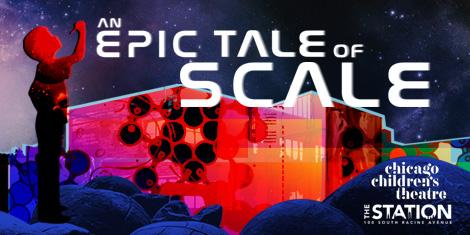 Families, set your dials for fun, because Chicago Children’s Theatre is transforming its new West Loop home, The Station, into an all-immersive,
two-story theatrical environment for the world premiere live theater event
An Epic Tale of Scale.

Co-created and co-directed by Henry Wishcamper and Jo Cattell, collaboratively designed by Chicago Children’s Theatre's Frank Maugeri,
with original music by Gabriel Ruiz, An Epic Tale of Scale is a
first-of-its-kind, live theater experience for families.

Kids and adults alike will embark on this world premiere, interactive experience that spans two levels of The Station. Participants will explore
the mysteries of scale, journeying deep inside the human body and
out to the farthest reaches of the galaxy.

Audiences are limited to groups of 20. Entry times are staggered every 15 minutes. 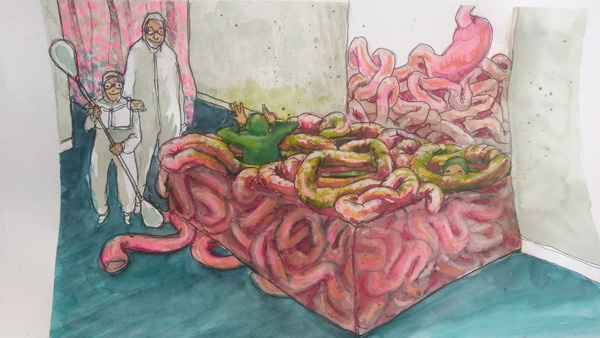 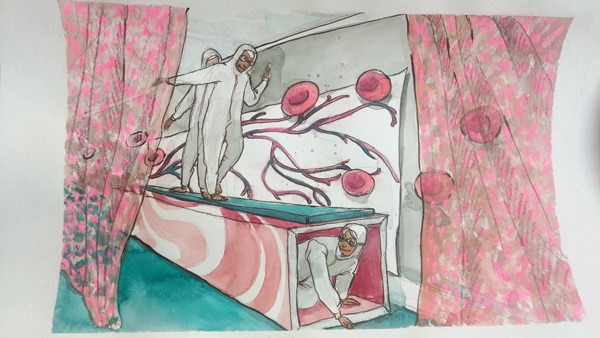 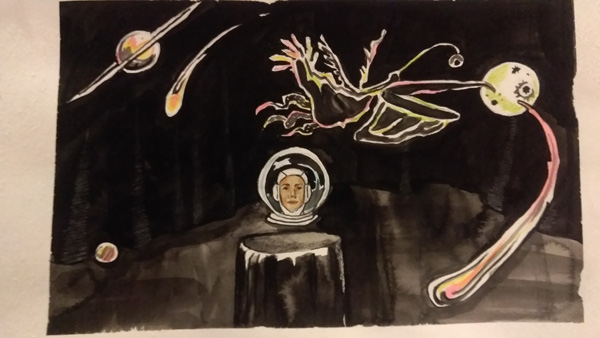 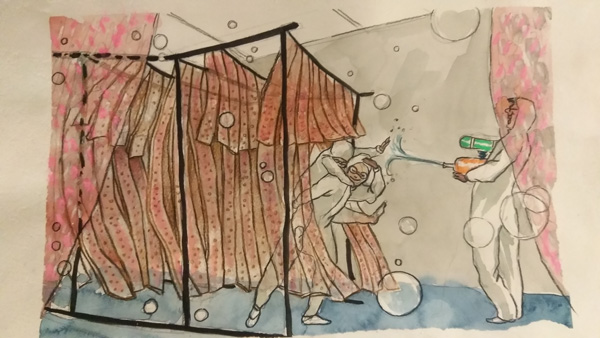 
Think The Magic School Bus meets Sleep No More and you’re on the right track. Kids and adults alike will embark on this world premiere, interactive experience that spans two levels of The Station, exploring the mysteries of scale while taking families on a journey deep inside the human body and out to the farthest reaches of the galaxy.

This isn’t some science nerd’s sit-and-watch slide show preaching the wonders of scale. An Epic Tale of Scale introduces an all-new way for kids and parents to enjoy live theater, with an all-out audience immersion environment that lets everyone experience the science behind scale.

Audiences are limited to groups of 20, with entry times staggered every 15 minutes for a fun, funky, two-story small group tour through the human body, outer space and beyond.

Along the way, voyagers young and old will encounter costumed corpuscles, a collection of curiosities on loan from The Field Museum, art activities, a race between parents and kids through an anatomical obstacle course, mind benders, a musical soundscape in every space and maybe even a cosmic dance party.

Tickets to An Epic Tale of Scale are $47 including fees. Purchase tickets, sign up for entry times and inquire about group rates at chicagochildrenstheatre.org or call Chicago Children’s Theatre Guest Services, (872) 222-9555.

Chicago Children’s Theatre, The Station, is located in the heart of Chicago’s West Loop community at 100 S. Racine Avenue, at Monroe. Free onsite parking is available in the lot on the south side of the building, entrance on Racine. The Station is also surrounded by free street parking, metered street parking and several paid lots, including Impark, 1301 W. Madison St.

An Epic Tale of Scale brings together a collective of top Chicago theater artists, all intent on “giving kids, parents and caregivers an opportunity to take an adventure together that’s participatory, educational and intellectually challenging,” says co-creator Henry Wishcamper.

Co-creators/directors Henry Wishcamper and Jo Cattell collaborated on an earlier incarnation of An Epic Tale of Scale at Ancona School in Kenwood, where Wishcamper’s children attend school. Wishcamper is a Producer and an Artistic Associate at the Goodman Theatre where his directing credits include Lillian Hellman’s The Little Foxes, Seth Bockley’s Ask Aunt Susan, his adaptation of the Marx Brothers’ Animal Crackers by George S. Kaufman and Morrie Ryskind with music and lyrics by Bert Kalmar and Harry Ruby, Jon Robin Baitz’s Other Desert Cities, Horton Foote’s Talking Pictures, a New Stages production of Abe Koogler’s Blue Skies Process and the 2013 – 2017 productions of A Christmas Carol. Other Chicago directing credits include Conor McPherson’s The Night Alive at Steppenwolf and McPherson’s adaptation of August Strindberg’s Dance of Death at Writers’ Theatre.

Jo Cattell is part of LightPoets (with dandypunk and Darin Basile), whose show HEARTCORPS: Riders of the Storyboard, premiered at the 2017 Sundance Film Festival, and is currently in development for full production in New York City. She recently worked as Associate Director on Shakespeare in Love at Chicago Shakespeare Theatre and is working with playwright Isaac Gomez on his play, The Displaced, for Haven Theatre, 2018. She wrote and directed TUMBAO with Dominizuelan, which performed at Steppenwolf’s 1700 Theatre. Cattell has worked with numerous theater and television companies, including the BBC, Cirque du Soleil, Clear Channel Entertainment, Tiger Aspect, Sky Television, Really Useful Group, Joe’s Pub at The Public Theater, Origin Theatre, terraNOVA Collective, Pentabus Theatre, Leviathan Lab, and Culture Project. She is the 2018 Maggio Directing Fellow at the Goodman Theatre. In 2016, she was awarded the 3Arts Award for her work as a theatre maker. Cattell’s young son also served as a frequent “test bunny” for many of the games and experiences in An Epic Tale of Scale.

Gabriel Ruiz (composer) has created a sound track for An Epic Tale of Scale that combines original hip hop, rock and folk songs about scale with epic loops to create a sonic reality for each space in the tour. Currently Ruiz is starring in You Got Older at Steppenwolf Theatre, where he also co-curated and hosted Sound+Fury, a night of lyrics and vocals weaved through electronically driven Latin, house, and hip-hop music. He is a graduate of the DePaul Theatre School and an ensemble member of Teatro Vista. Chicago credits include The Wolf at the End of the Block and White Tie Ball for Teatro Vista, Singin' in the Rain and City of Angels at Marriott, Man in the Ring and Agamemnon at Court Theater, Arcadia and Company at Writers' Theatre, The Upstairs Concierge at Goodman Theater, Creditors at Remy Bumpo Theater, Sita Ram for Chicago Children's Choir, Working: The Musical at Broadway Playhouse, Richard III at Chicago Shakespeare and Arabian Nights at Lookingglass.

Frank Maugeri (collaborative and scenic designer) is Community Programs Artistic Director at Chicago Children’s Theatre, where he develops and oversees the city’s most diverse, year round roster of performing arts youth classes and camps anywhere in the city. Maugeri joined Chicago Children’s Theatre (CCT) in 2015 after serving as Producing Artistic Director for Chicago’s Redmoon Theater, where he served for two decades as an expert collaborator, community builder, ritual maker, educator and inventor of innovative curriculum and artistic programming. Maugeri is also creative director of Cabinet of Curiosity Events.

Now on stage through February 18 in the Pritzker Family Study is the world premiere of My Wonderful Birthday Suit!, a play for kids 4 to 7 about diversity acceptance. Meanwhile, the Red Kite Treasure Adventure, an interactive theatrical experience for children on the autism spectrum, created by Jamie Abelson, is running upstairs in the Red Kite Room, through March 4, 2018.

In addition to a full slate of shows in the Pritzker Family Studio, The Station has four classrooms that host a year-round roster of classes and camps for toddlers to teens, along with a variety of community engagement programs. Visit chicagochildrenstheatre.org/education for more information.

Since its launch in 2005, Chicago Children’s Theatre has cemented its reputation as the city’s largest professional theater company devoted exclusively to children and young families. The company evolved out of Chicago’s need for high-quality, professional children’s programming to match the quality and significance of powerhouses such as Steppenwolf Theatre Company, Goodman Theatre and Lookingglass Theatre.

﻿CCT has built its national reputation due to its focus on new work, producing 15 world premieres in the last 11 years including The Selfish Giant, The Hundred Dresses, Jackie and Me, Dot and Ziggy, The Houdini Box, The Elephant and The Whale (in association with Redmoon), Mr. Chickee’s Funny Money, Leo Lionni’s Frederick, Wonderland, Alice’s Rock & Roll Adventure, A Snowy Day with Beatrix Potter, Jabari Dreams of Freedom, Moonshot: A Race to Space, The Year I Didn’t Go To School: A Homemade Circus and My Wonderful Birthday Suit! These enjoyed successful inaugural runs in Chicago, many followed by productions at theaters across the U.S. In 2017, Chicago Children’s Theatre became the first theater for young audiences in the nation to win a National Theatre Award from the American Theatre Wing, creators of the Tony Awards.

Led by Co-Founders, Artistic Director Jacqueline Russell and Board Chair Todd Leland, Board President Eric Neveux and Community Programs Artistic Director Frank Maugeri, Chicago Children’s Theatre is supported by a dynamic Board of Directors comprised of dedicated individuals from the fields of entertainment, philanthropy and business. Chicago Children's Theatre is sponsored in part by ComEd, Goldman Sachs Gives and JP Morgan Chase.

For more information, visit chicagochildrenstheatre.org.
Posted by Bonnie Kenaz-Mara at 9:13 AM