Act Out: Midsummer Nights Dream and Taming of the Shrew at Chicago Shakespeare Closing


It's Chicago Shakespeare Theatre's 25th Anniversary Season and they're continuing their impressive world class offerings.   We've been raving about  A Midsummer Night's Dream and Taming of the Shrew, Short Shakespeare since opening night of both shows late last month.   ChiIL Live Shows highly recommends both.   If you haven't gotten out to see these productions yet, don't delay.   Shrew and Midsummer close April 7th & 8th respectively.    Both are family friendly, impressive and accessible.   Congrats again to ChiIL Mama's family 4 pack Taming of the Shrew ticket winner, Kathy E.    She'll be checking out the show this weekend.

You could travel the globe and be hard pressed to find a rival for the award winning Chicago Shakespeare Theatre.   In fact, on opening day of Taming of The Shrew, Chi Shakes was playing host to delegates from Shakespeare Fests around the world. 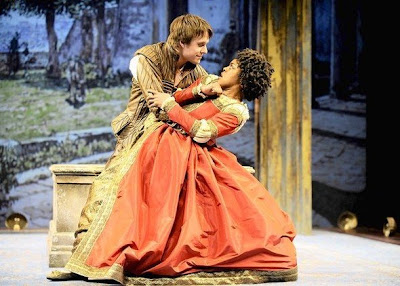 Short Shakespeare in particular, is designed with families in mind.   They keep the original language and intent in tact, but condense Taming of the Shrew into an action packed romp with a few modern nods, like sunglasses and funky boxer shorts beneath ornate, traditional costumes and contemporary music at transition points.   These additions bridge the historical gap and help the audience more easily grasp the modern relevance of Shakespeare's timeless themes and endearing characters.  We also liked the female director, Rachel Rockwell's take on the "taming", which is sometimes played up as a misogynistic nightmare.   Her take was that Kate was a victim of labeling and self fulfilling prophecy and instead of having her will broken by her new husband, she became more completely herself by someone who could appreciate her spunk and intensity.


Kate, played by Ericka Ratcliff, and Bianca, played by Tiffany Yvonne Cox, were a true pleasure to see.   On opening day, we ran into another friend and member of the press, who plays "count the black people" with her kids when they go to theatre and movies.  She was elated to see the sisters were played by women of color.  Of course, in an ideal world, skin color would be as irrelevant in casting as eye color, and Chicago is moving in that direction.   Still, I'm amused by her game and agree it's a valid point she makes with her children, as they strive to find role models in entertainment that represent and resemble them.  Kudos to Chicago Shakespeare for casting an interracial leading couple, and letting talent and temperament trump genetics.   The entire cast was impeccable, amusing and adept.

We're big fans of prepping the kids when they're going to see a challenging play.   We try to read the books first, when it's literature based theatre and the kids still love playing the same/different game when we've read a book version or seen a movie version first.   There are numerous adaptations of Shakespeare's works that are age appropriate for a wide range of kids.   This prep can be particularly helpful with younger theatre goers or older kids who have little experience with the language, so they'll know the basic plot going in and be less confused or intimidated if they can't easily grasp the unfamiliar words.    Our absolute favorite children's book version is by author Bruce Coville, who also has a sweet version of The Tempest.   The story and illustrations are amazing.   There's also a fun, early chapter book in the Magic Tree House series that my kids enjoyed in early elementary school.   Here's a link with loads of great suggestions for introducing Shakespeare to Children, including an audio version including both A Midsummer Night's Dream and Taming of The Shrew.

That said, Chicago Shakespeare does a fabulous job with the playbills for their short Shakespeare.  If you don't have time to check out a book or movie version before hand, go early and read the program together.  There's a short form of the story, cool bits of trivia, fun bios, and games, all presented in a colorful, funky, visual way.

My kids' first live Shakespeare show was Midsummer Night's Dream, performed by Rosebriar Shakespeare Company of Columbus, OH, back in 2009.   A close, family friend was in the outdoor production, Puck was a puppet, and the kids were enamored.   Check out our Midsummer 2009 coverage here.


Midsummer is a great introduction to the bard, as it's colorful, amusing and fast paced.   Chicago Shakespeare Theatre has a much slicker, high budget production, that's truly something to see.   I've seen this play done numerous times over the years and this one was by far the funniest version I've ever had the pleasure of attending!   The audience was laughing enthusiastically throughout the show.   I won't spoil Puck's fabulous reveal, but it was a creative twist, worthy of the bard.  Oberon was so smolderingly sexy that it was easy to believe he bewitched and commanded everyone.   Between the charismatic actors, the gorgeous costumes and sets and the consummate acting, this show makes for a memorable, Shakespeare experience for a first timer or a seasoned aficionado.   Both are highly recommended.

Check out Chicago Shakespeare Theatre's main site for ticket booking, behind the scenes info, photos, education materials and more.
Posted by Bonnie Kenaz-Mara at 9:11 AM