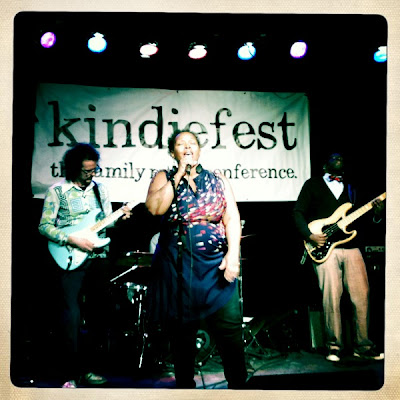 Shine and the Moonbeams stole the show at Kindiefest 2011!!
R & B. Amazing!
photo credit for all:   Little Miss Ann
ChiIL Mama has something extra special for our readers today.   The last time Miss Ann and Suzy Shelton hung out was in NY at the annual Kindiefest, earlier this year.    We have exclusive photos and a guest post about Kindiefest, by Miss Ann herself!
Check out the recap, and then come see both excellent, kindie musicians rock the Beat Kitchen together THIS Sunday at noon.

Kindie (a shorter, catchy form of kids' independent music or indie) is a term for family music that can cover many genres, but generally means not mainstream, like Barney and The Wiggles.   This is my third year going to the Kindiefest, an informative and rockin’ 3 day fest, for those that are involved in the kindie music industry from all over the country. 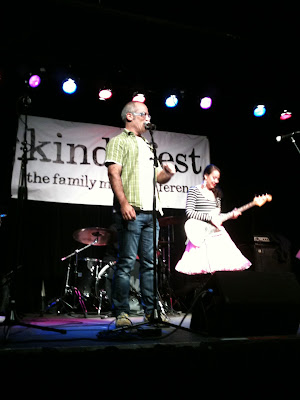 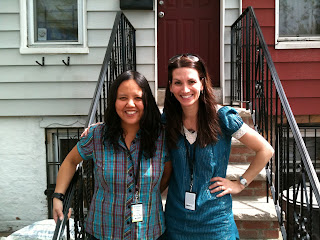 Suzi and Ann in front of Suzi’s in Park Slope Brooklyn.
Friday night, was the reception and a keynote speaker. The vibe to me here was like some sort of high school reunion. Seeing people you haven’t seen since last year or meeting people that you’ve listened to and feel as if you know them. It was also pretty inspiring to look out into the audience and see kindie artists such as Lunch Money, Recess Monkey, Frances England, Secret Agent 23 Skidoo, Trout Fishing in America, and Johnny Bregar and many many more kindie entertainers.
The key note speaker was Sirius/XM’s Kids Place Live Kenny Curtis, a 20 year veteran of family entertainment. He gave a witty speech about how he started in kid’s music programming. Audience members circled the funny phrases that Kenny slipped into his speech on a bingo sheet.
Saturday: 10-5ish informational panels with very experienced panel members that hit on topics such as PR, Collaboration, TV, Reaching an Audience, and many more. Here is a blurry picture of a very impressive “Building a brand for your band” panel. If you look closely you can see Laurie Berkner. Laurie Berkner went up even more in my book as she talked about the decisions that she has made along the way in her music careers. 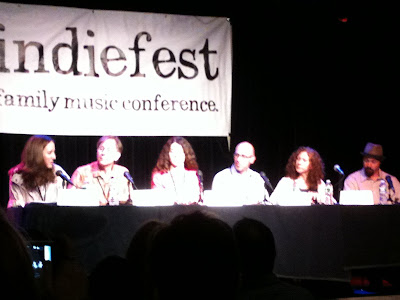 Saturday night is the fun night at Kindiefest with a diverse Industry showcase which included Billy Kelly & the Blahblahblahs, The Pop-ups, The Not-its, The Board of Education, Cat and a Mouse, Shine and the Moonbeams, RhymeZwell and Candy Band. This year’s music did not disappoint. The shows ranged from pop to rock to hip hop to folk to punk rock as seen by the incredible Candy Band in their usual punk rock mama fashion!
I think most attendants would agree with me that this year’s kindie gem though was New York own R&B Shine and the Moonbeams bringing yours truly and Tim of Tim and the space cadets up on stage and into a funky dance frenzy. At an earlier panel, Skiddo of Secret Agent 23 Skiddo was just saying there was a void of Kindie R&B. 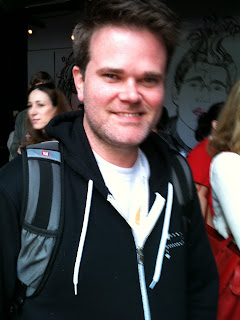 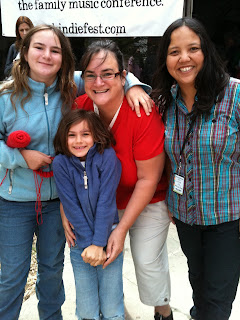 Gwyneth Owens Butera with daughters from Gooney Bird Kids
Sunday day: Sadly, I had to leave early and was not able to attend. This event is open to the public. Unfortunately, I had to miss my personal favorite Elizabeth Mitchell and You are my Flower. The other bands included Jazzy Oran Etkin, uke-slinging Heidi Swedberg, Aaron Nigel Smith, Tim and the Space Cadets and the tight harmonies of the Verve Pipe. 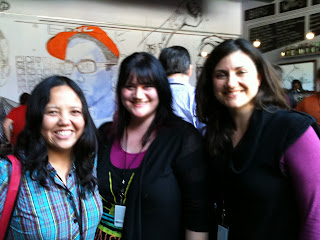 
Candy Band at Beat Kitchen
& Candy Band at Kidzapalooza
Check in with ChiIL Mama like we vote in Chi, IL...early and often.   We're posting loads and loads of awesome band interviews and live footage all the time. 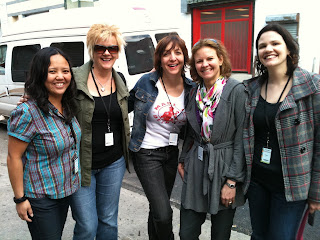 Little Miss Ann and the Candyband from Detroit 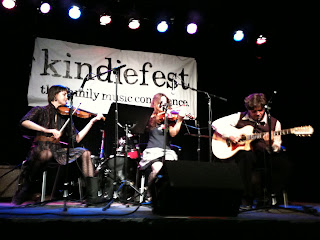 Cat and a bird – 2 violins and a guitar.
Check out ChiIL Mama's print interview with Tor Hyams (click the link), one of the organizers of Kindiefest.    We have a exclusive video interview of Tor and Kindie King, Ralph Covert, of Ralph's World, coming in the near future.

Want to win some great CDs by Top Windy Kindie and Award Winning National Kindie Bands?!   Then check in with ChiIL Mama soon for our GIANT KINDIE HOLIDAZE GIVE AWAY!   We'll have zillions of hot, new releases from Kindie Bands across the nation, for YOU, for FREE!
Sign up to follow ChiIL Mama by e-mail and/or hit the follow button on our ChiIL Mama Facebook Page, so you won't miss out!   Both can easily be done in the sidebar to the right.   You can also check out and follow our YouTube Channel.   We have exclusive interviews with Recess Monkey and Tim and The Space Cadets there, along with loads of live footage from their Kidzapalooza appearance.
So ChiIL out with ChiIL Mama where parents AND kids rock and life doesn't end with birth!
Posted by Bonnie Kenaz-Mara at 1:35 PM