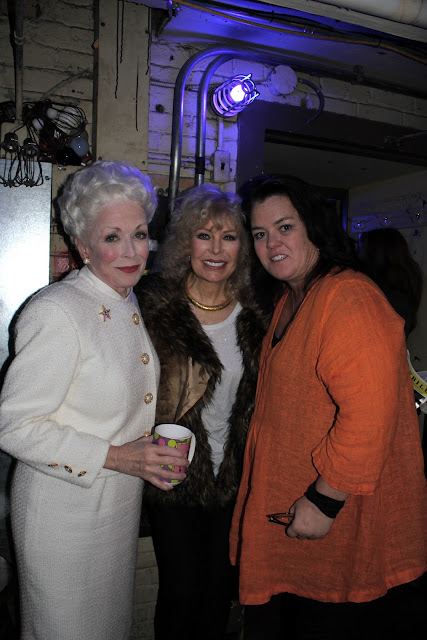 Rosie, Holland and Loretta after the preview performance last night
Rosie O’Donnell and Loretta Swit “Hot Lips Houlihan” (MASH and the Chicago production of LOVE, LOSS, AND WHAT I WORE) attended last night’s preview performance of ANN with Holland Taylor (Two and a Half Men) at the Bank of America Theatre.
ChiIL Mama can't wait for opening night tomorrow.   We'll have a full review for you this week.   We may be the Second City, but we get Ann first!   Come check out THE PRE-BROADWAY ENGAGEMENT.
WITH EMMY® AWARD-WINNING ACTRESSHOLLAND TAYLORNOW PLAYING IN CHICAGO

Broadway In Chicago is thrilled to announce ANN, with actress Holland Taylor (from Two and a Half Men), is is now playing at the Bank of America Theatre (18 West Monroe Street) for a limited three-week engagement, Nov. 13- Dec. 4, 2011.   ANN, a new play written and performed by Emmy Award-winning actress Holland Taylor, is a no holds barred look at the astonishing Governor of the Lone Star State Ann Richards.  Directed by Benjamin Klein, with scenic design by Michael Fagin, lighting design by Matthew Richards, projection design by Zachary Borovay, sound design by Ken Huncovsky and wig design by Paul Huntley, ANN is produced by Bob Boyett.  Holland Taylor steps into the shoes of Ann Richards, a leader who actually believed she could empower, expand and enrich the lives of her constituents. ANN is an inspiring and hilarious play that brings you face to face with a complex, colorful and captivating character bigger than the state from which she hailed.  Holland Taylor takes the audience on a journey, swirling together the past and present to reunite Ann Richards with old friends and introduce her to a new generation.  ANN began as a “project” and quest for Holland to understand what it was about this live-wire housewife, mother, grandmother and Governor of Texas that affected so many people so deeply.  Writing the play became a three year journey for Holland, crisscrossing the country, interviewing people who knew the Governor, watching countless hours of video coverage, and pouring over reams of Richards’ personal and public papers at the University of Texas.  In the end, her greatest resources were the family, friends, staff and colleagues of the Governor who allowed Holland to “know” Ann Richards. No stranger to playing strong women, Holland Taylor has performed on stage, screen and television portraying a range of characters as varied as a Harvard law professor in Legally Blonde, a sultry judge in The Practice (Supporting Actress Emmy® for Drama) and the mother of Charlie Sheen and Jon Cryer in Two and a Half Men.

Taylor has also played both ends of the political spectrum with conviction, from conservative Nancy Reagan on the right to Ann Richards on the left. The New Yorker has called Holland Taylor “the first vaudeville Gentile we ever saw.”  Her long list of credits includes Baby Mama, Romancing the Stone and currently, CBS’s top‐rated Two and a Half Men.  Her New York stage performances include Bess in Breakfast with Les and Bess, the original productions of Butley opposite Alan Bates, and A.R. Gurney’s The Cocktail Hour.  Taylor is active at the Stella Adler Schools and has given talks about the work and cultural contribution of this great teacher. Tickets start at $20 and are on-sale now. A select number of premium seats are also available for many performances. Tickets are available now for groups of 15 or more by calling Broadway In Chicago Group Sales at (312) 977-1710. The performance schedule for ANN is as follows: Tuesdays at 7:30 p.m.Wednesdays at 2 p.m. and 7:30 p.m.Thursdays at 7:30 p.m.Fridays at 7:30 p.m.Saturdays at 2 p.m. and 8 p.m.Sundays at 2 p.m. and 7:30 p.m.Please note: performance schedule and prices are subject to change. For more information, visit www.BroadwayInChicago.com.

Posted by Bonnie Kenaz-Mara at 3:08 PM