Nutcracker is in The House 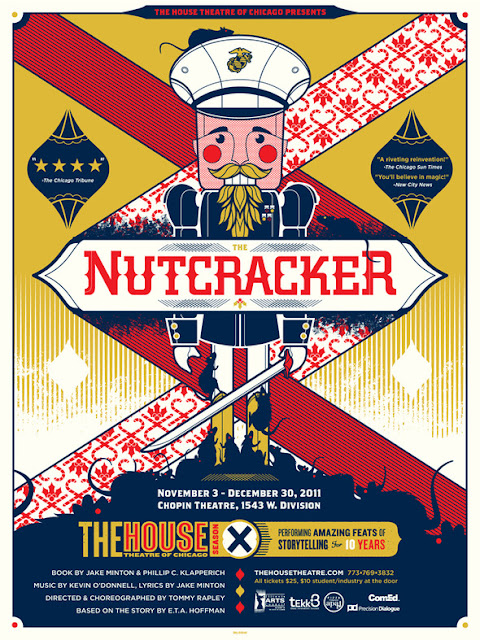 And so it begins........Tis the season for winter classics.   In the next two months Chicago will be nuts with Nutcrackers.   But like those mixed bowls where the good ones get gobbled up, not all nuts or Nutcrackers are created equal.   Here at ChiIL Mama we prefer our classics a bit edgy, and unconventional.    We can't wait to check out The House Theatre's Nutcracker tonight.   They're running now through December 30th.   We'll have a full review up for you soon. 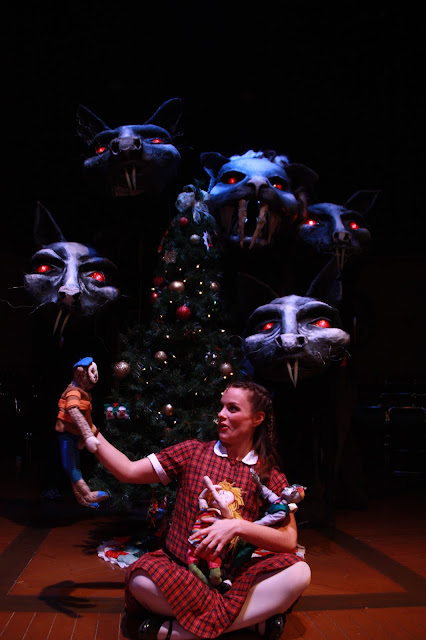 Here's what the house has to say

The holidays are here! And for the second year in a row The House is thrilled to be celebrating with our not-so-traditional take on the seminal holiday classic, The Nutcracker.
The Story
The House’s fantastical re-imagining of this holiday classic centers on Clara’s journey to save her family from the Rat King before Christmas, with the help of a Nutcracker, a gift from her beloved Uncle Drosselmeyer. What unfolds is a heartwarming holiday story that weaves riveting dialogue, astonishing puppetry, beautiful song and spellbinding spectacle together into a darkly moving story of magic and mystery.
The Nutcracker is an adaptation of the original tale by E.T.A. Hoffman, written by House Company Members Jake Minton and Phillip Klapperich, with an original score by composer and House Company Member Kevin O’Donnell, and directed and choreographed by Company Member Tommy Rapley.
Adults often worry they'll be overrun with kids at shows like this. Meanwhile, parents tend to worry whether their kids will disturb people. This is the rare theatrical environment — child-friendly but also hip and adult — in which both groups will be fully comfortable.   Chicago Tribune
Who Is "The House Theatre of Chicago?"


The House is an award-winning theatre company devoted to the development and production of original theatre by daring and innovative artists. Founded ten years ago by a group of close friends, The House fuses Movement, Music, Magic, Combat, Dance and Spectacle to ignite the audience’s imagination and put the impossible on stage.
It is the mission of The House to unite Chicago in the spirit of Community through Amazing Feats of Storytelling.
Wanna Give Back a Little Sumpin Sumpin
We've filled ourselves with holiday spirit and now as we open the show, all we want for Christmas is your support!  In conjunction with the show we've created an IndieGoGo campaign to ensure that families can continue to enjoy their holiday season with us for years to come!

Make a donation and a present awaits you, because well, it is the holidays and who doesn't love presents! Signed show posters and invitations to our holiday party are just some of the perks up for grabs when you donate to our campaign.
Click on the presents in the pic and help us continue to make holiday magic!

ChiIL Out with ChiIL Mama this holiday season.   We'll have photo and video filled reviews of music and theatre for adults and kids, video interviews, upcoming events, and loads of give aways!    We'll stuff your stockings with freebies.    We have a treasure chest full of CDs, DVDs, books, video games, toys, show tickets, and more!   Pirates aren't the only ones who like booty!

KIDS MUSIC:   Video Interviews and live show footage from Verve Pipe, Ralph Covert, Suzi Shelton, and Andy Roo.   We also have Human Tim + Robot Tim, Dreamtree Shakers & Poochamungas footage and Laura Doherty's CD release party in it's entirety.    We also have interviews and footage of a bunch of rockin' kids IN bands like Purple Apple, The Blisters When Flying Feels Like Falling, and The Socialists.


INTERVIEWS:   We have a great, upcoming video interviews with the CEO of the largest Girl Scout region in the world, the CEO of Red Rover and the founder of Wonder.

THEATRE:   We have live, rehearsal footage and a whole slew of great interviews with the director, and adult and child actors in A Christmas Story The Musical, playing at Chicago Theatre, December 14-30th.


So like our FB page and follow us by e-mail or RSS so you don't miss anything.  Then check back with ChiIL Mama like we vote in Chi, IL...early and often.
Posted by Bonnie Kenaz-Mara at 3:24 PM

Email ThisBlogThis!Share to TwitterShare to FacebookShare to Pinterest
Labels: the house theatre, The Nutcracker