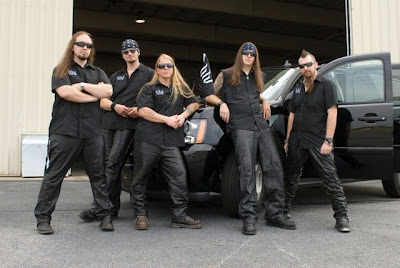 NEW ALBUM "IndoctriNation" AVAILABLE NOW ON NIGHTMARE RECORDS
HALCYON WAY, Atlanta's premier metal band is bringing their powerful mixture of heavy, punishing riffs and infectious melodies to North America with their new release "IndoctriNation".  "IndoctriNation" is the sequel to 2010's "Building The Towers" and continues the sound and theme of that album. It features 5 brand new original tracks; a cover of "Stand Up" by Steel Dragon, a radio edit of "The Age Of Betrayal", and an industrial remix of "The System".
Aurally combining the heaviness of bands like Testament, the technical prowess of Dream Theater, the power metallic attitude of Evergrey and soaring vocal melodies, HALCYON WAY will leave you awestricken by their punishing riffs and unforgettable hooks.
Order your copy now at www.halcyonway.com/webshop
HALCYON WAY are hugely involved with the Rock Band Network and Rock Band video game series.   The band is now part of the largest contest ever run by Rock Band Network.
"HALCYON WAY are proud to be part of this great contest and ready to see how the fans do as they try to outshred us!  BRING IT," said Bodan.
Did you guys say you wanted a contest? Boy have we got one for you!
First the bad news :
To win this contest you'll have to prove your mettle in a TAG "Endless set list" featuring THIRTY of our songs in one play list!
Thirty songs you say? THIRTY?!? Yep 30. BUT the spoils that go to the victor will be well worth going through the set list.
First up :
You'll get a signed copy of Rishloo's "Feathergun" album, a signed Rishloo poster, a limited edition very RARE signed Halcyon Way poster, a copy of Halcyon Way's "Building the Towers" and "Indoctrination" CDs, CYNIC "Traced in Air". THE DILLINGER ESCAPE PLAN "Option Paralysis", AND SEPTICFLESH "Communion" CDs!
WHAT? Still not enough?
Good god people....ok then how about a set of drum sticks for your rock band drum set, some drum tape, a gaggle of T-shirts from Fender, Martin, Vic Firth, and other brands, AND a cooler with an ipod dock!
Surely that's enough....No?!?! You want more?!?
Ok last thing. I mean it.
The winner of this contest will also receive one FENDER PRO GUITAR AND A MIDI ADAPTER FOR THE XBOX 360.
Yeah you read that right. That Pro guitar that everyone wants and no one can find because it's no longer in production? All you have to do is win this contest and it's yours.
Along with all that other stuff.
Oh and since you twisted our arm we'll throw in 3200 ms points to get your new pro guitar Rock Band collection started.
We told you we'd be announcing the contest to end all contests and we meant it.
Oh what's that? How do you win?
Well that's the easy part. You don't have to be first place, or tenth place, all you have to do is log in a score on the leader boards for this battle on ANY instrument or combination of instruments during the next seven days.
A winner will be picked at random from all the leader board scores.
So for you guys that don't think you're good enough to win a contest because there are better players out there, then this is THE contest for you.
WHAT?!?! STILL NOT GOOD ENOUGH!?!?!
OK how about some very rare Harmonix swag then? A bunch of RB stickers (instrument icons and John Dee artwork), pins, wristbands, a RBN tote bag AND a signed copy of RB3 for the 360.
Go. Play. Win.
http://www.rockband.com/battles/the-tag-endless-setlist/view[/url]
Click the link above to join the contest. You'll be taken to a page that lets you purchase any tracks you might not have to join the contest.
"INDOCTRINATION" TRACK LIST:
1. On Black Wings
2. Our Finest Hour
3. IndoctriNation
4. Revolution Is Now
5. The Wages Of War
6. Stand Up (Sammy Hagar Cover)
7. The Age Of Betrayal (radio Edit)
8. The System (karbonBlack RMX-Remixed-Bodan)
DISCOGRAPHY:
2011 - INDOCTRINATION - Nightmare Records
2010 - BUILDING THE TOWERS - Nightmare Records
2008 - A MANIFESTO FOR DOMINATION - Nightmare Records