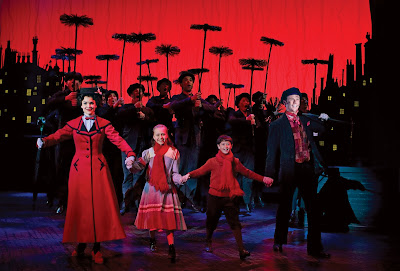 
Catch her while you can.   This highly recommended, award winning production will be flying off after November 6th.    We caught opening night and the kids and I thoroughly enjoyed it.   Even at age 10, my son still loved the rousing dance numbers, familiar songs, the quirky plot, and the vibrant costumes.   I got a kick out of the fact that my kids' favorite songs were my own childhood favorites...basically all the chimney sweep numbers.


This is THE classic story, with loads of stage magic and fun, new twists.   Come see statues spring to life, chimney sweeps bring luck with a roof dancing, wall walking extravaganza of dance numbers, and so much more. 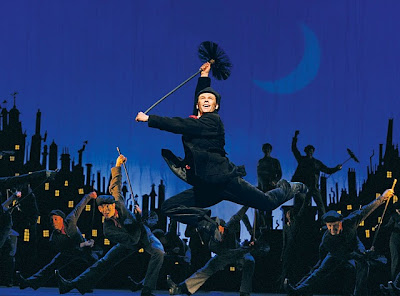 The home set, reminiscent of a giant, folding doll house, was quite impressive.    And the magic and wonder will leave a lasting impression on adults and children alike. 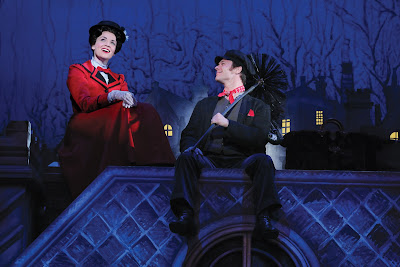 Do not miss Mary Poppins at Cadillac Palace.    The show must close November 6th.

Even with a competition gymnastics injury requiring a week on crutches, we managed to "step in time" and had great fun with this high flyin' musical.

Our temporarily handicapped status gave us an interesting perspective.   We discovered Cadillac Palace has amazingly helpful staff, bathrooms down flights of stairs, and the slowest elevator in the universe!   Patrons were also extra kind to Sage, complimenting her pretty dress and remarking how well she was getting around.


She dutifully said thank you to the complimenters, but my fav part of the evening was the bathroom line, when a passing lady told Sagezilla "My, what a pretty princess you are!"   eliciting a horrible grimace and a little tongue sticking out.   Of course that made the women in line around us crack up.    I gave Sagezilla, the anti-princess, a little mom talk about how she should have said thank you, as it was meant as a compliment, but the punk inside me was cheering.   Yay for little girls who don't buy into the princess pathology!   You rock!

This high-flying musical returns, bringing its own brand of Disney magic back to Chicago! Featuring the irresistible story and unforgettable songs from one of the most popular Disney films of all time, plus breathtaking dance numbers and spectacular stage-craft, MARY POPPINS is everything you could ever want in a hit Broadway show! So get swept up in the fun of this dazzling musical the New York Post gives 4 out of 4 stars and calls “a perfect piece of musical theater.”

Broadway’s most magical musical MARY POPPINS celebrated its 2000th performance at the New Amsterdam Theatre on  Sunday, September 4.  A co-production by Disney and Cameron Mackintosh, MARY POPPINS is the third Disney Theatrical Productions show (following Beauty and the Beast and The Lion King) and the fifth Cameron Mackintosh show (joining Cats, Les Misérables, The Phantom of the Opera and Miss Saigon) to play 2000 or more Broadway performances.


The Broadway production of MARY POPPINS officially opened on November 16, 2006, recouping its initial Broadway investment within 52 weeks of its premiere.  MARY POPPINS is the only show from the 2006-2007 theatrical season still running. 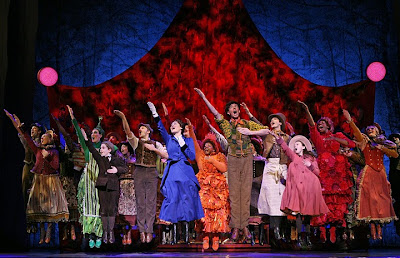 With four productions currently running on three continents, MARY POPPINS is one of the biggest stage musical successes to emerge from London or New York in recent years.  Worldwide to date, the six productions of the show have grossed over $605 million, welcomed 8.5 million guests and cumulatively run 12 years.  The musical is the winner of 44 major theatre awards around the globe, including Tony®, Olivier, Helpmann and Evening Standard awards.


MARY POPPINS received its worldwide premiere at the Prince Edward Theatre in the West End in December 2004.  Following its successful three-year London run, the production launched an acclaimed U.K. tour.
The MARY POPPINS North American tour has garnered continuous critical praise and achieved box office success since its launch in Chicago in March 2009.  MARY POPPINS can also be seen in Scheveningen, Netherlands (outside of Amsterdam at the Circus Theatre) and Sydney, Australia (at the Capitol Theatre).  Productions of MARY POPPINS have also been mounted in Finland, Denmark and the Czech Republic.

Posted by Bonnie Kenaz-Mara at 2:27 PM