The Stooges: "Head On" A Journey Through the Michigan Underground 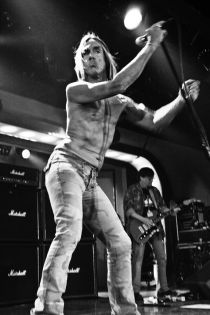 If the MC5 were Detroit's political spokesmen for the disenchanted youth of the 1960s, then the Stooges were the loutish kids, heckling from the back of the room. While conventional wisdom says they could barely play their instruments, the Stooges left an indelible mark on the world of punk rock, and the band's initial three albums-The Stooges, Fun House and Raw Power-are bona fide classics. In The Stooges: Head On author Brett Callwood treats the band's story not just as an early chapter in the career of its famous front man, Iggy Pop, but from the Stooges' beginnings at the end of the 1960s, to its end in the early 1970s, and to its reunion in 2003 through the present.
"Writing a Stooges biography was a no-brainer for me," Callwood states. "My first book is about the MC5 and in researching that while still living in London, I had traveled to Detroit / Ann Arbor and fallen in love with the whole area and its music. I had made many friends and established many contacts that were and are associated with both the MC5 and the Stooges, so that made the process easier to get started. Also, when I wrote this book there wasn't a decent Stooges book on the shelves. There are a lot of Iggy books out there, but mine is the first full Stooges biography."
In compiling this exhaustive account of the band's history, Callwood interviewed all of the central and sometimes Stooges members, including Iggy Pop, Ron and Scott Asheton, James Williamson, Mike Watt, Steve Mackay, and Scott Thurston, and largely lets the band tell its own story in numerous long quotes. Callwood details the band's genesis as teenage friends in Ann Arbor, their time living together in their legendary party houses in the 1960s, and the recording of the three original Stooges albums. He examines the addition of James Williamson to the band on Raw Power and how it changed the band's sound and dynamic, along with the band's fateful meeting with David Bowie on its first British tour.
As Iggy broke out as a solo artist during the 1970s and 1980s, Callwood charts the Asheton brothers' post-Stooges experiences, with Ron's turns in The New Order, Destroy All Monsters, and Dark Carnival, and Scott Asheton's time with the Farleys and Sonic's Rendezvous Band. He also provides an overview of Iggy's solo career, the seeds of a reunion that were planted with a collaboration on Iggy's Skull Ring album, and the eventual reformation of the band and the recording of their fourth album, The Weirdness, in 2007.
Originally published in the U.K. in 2007, The Stooges: Head On has been revised to expand on the original story and also to consider Ron Asheton's untimely death in 2009 and his musical legacy, the band's fate without Ron, and the Stooges' long-overdue introduction into the Rock and Roll Hall of Fame in 2010.
"Scott didn't want to talk at all for the first edition... He rarely does interviews," said Callwood. "However, after his brother passed away and I was writing for this American edition, he talked to me and really opened up. It was a very moving, humbling experience."
Wayne State University Press is a distinctive urban publisher committed to supporting its parent institution's core research, teaching, and service mission by generating high quality scholarly and general interest works of global importance. Through its publishing program, the Press disseminates research, advances education, and serves the local community while expanding the international reputation of the Press and the University.
Posted by Bonnie Kenaz-Mara at 1:12 PM

Email ThisBlogThis!Share to TwitterShare to FacebookShare to Pinterest
Labels: books, Iggy And The Stooges