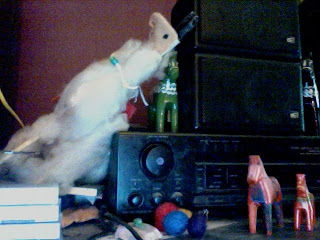 Lobster Moths and Llamas in Love
by Bonnie Kenaz-Mara

The was once a llama who gained consciousness in the Swedish American museum.    He found himself mysteriously dwelling on top of a steep steppe of stereo equipment in a Chi-town single family home.    He could only move at night, when the 4 human inhabitants of his dwelling were far away in their dreams.    But all day he looked out over his space and plotted where he'd roam that night.    He was content, looking down from his lofty heights and warm and comfortable in his stylish, real wool coat.    The children of the family had taken great time and care in creating him, so he never feared losing a limb in his nightly exploits.

As he gazed around, pretending a nonchalance he didn't feel, behind his unmoving eye, his gaze fell on many things.    He often hung out with the three wooden Dala horses from Sweden.    They were pretty laid back.    And the two stuffed bears in biker jackets and sunglasses he shared a shelf with were downright cuddly, under their tough looking exteriors.   He was a bit afraid of the Lego T-Rex that could shape shift into a ferocious looking crocodile or a fang toothed shark.    But he thought most often about the beautiful lobster moth who lived across the room.

She had been created by the family, after they read a lobster moth book and was a beautiful, ethereal and all together unique creature.    Her crimson body was a soft, fuzzy, stuffed beanie lobster, while by day her wings were cardboard and a Xerox copy of a real butterfly tattoo from the end of The Very Hungry Caterpillar.   By night, her wings grew gossamer and shimmering, and she'd flit around him, and lead him on marvelous, magical adventures. 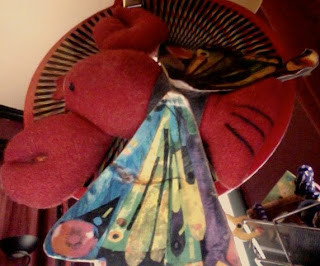 Email ThisBlogThis!Share to TwitterShare to FacebookShare to Pinterest
Labels: 826CHI